Among my favorite vintage specimens is this gem: a small set of Caran d’Ache Polycolor colored pencils. The cardboard box is tattered and fragile, but the pencils are still perfect. The set is possibly old enough to call an antique.

The lightly stained and varnished natural finish on the round barrel is still as lovely as the day the pencils were made. Interestingly, the barrel is slightly larger than conventional colored pencils; in fact, it is exactly the diameter of contemporary Luminance and Museum Aquarelle pencils, two of Caran d’Ache’s premium lines. I wonder if the Polycolor was presented as top-of-the-line in its day? The Luminance’s understated, natural finish, especially, evokes this ancestor’s design. 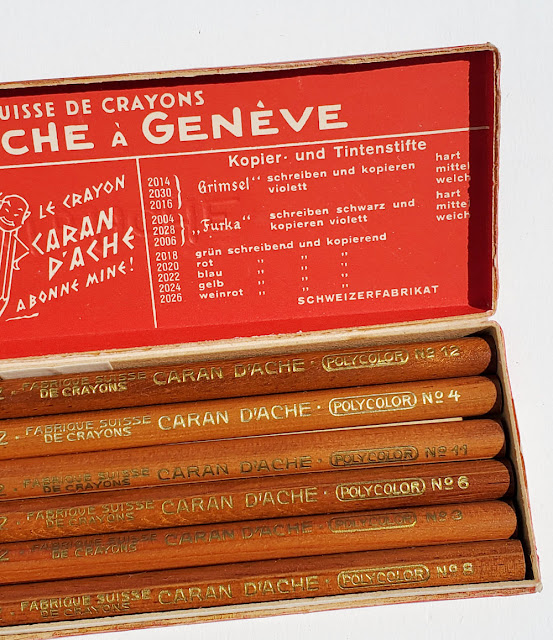 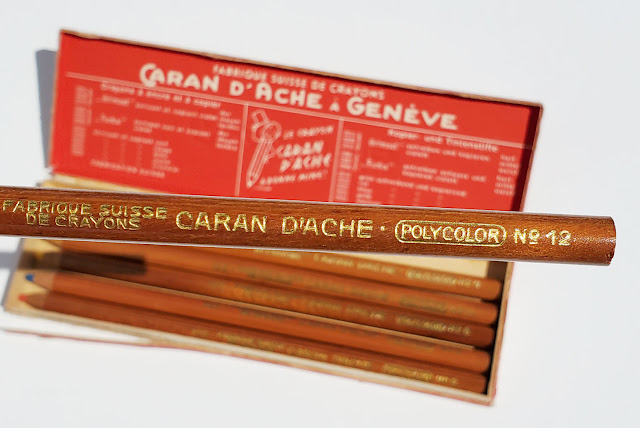 The cores are surprisingly thick for old colored pencils; alas, unsurprisingly, they are hard, dry and stingily pigmented. (As is often the case with vintage pencils, I adore and appreciate their designs, but I’m happy that I have many better options to use.)

I had fun sleuthing the possible age of this little set. The appearance of Bonne Mine ("looking good"), the hat-tipping mascot, on the box lid is one clue. According to Caroline Weaver in her book on pencil history, The Pencil Perfect, Bonne Mine came onto the Caran d’Ache scene in the 1920s to give a quirky edge to the Swiss company’s advertising.

For further clues, I also used the logos I snapped from Caran d’Ache’s website around the time of its anniversary celebration (the page is no longer live). The logo on the box looks like the one shown as being used around 1929 (below). By the ‘40s, the logo had changed to a more modern look. That leaves me to deduce that this set was made as early as 1929 or into the ‘30s. It is possibly even older than the Caran d’Ache Prismalo set I had previously thought was the oldest in my collection! It certainly qualifies as an antique.