A while back, Koh-i-Noor released a “retro” edition of its Polycolor colored pencil line to honor the product’s heritage. The box and pencil were designed with the Hardtmuth family crest and other elements from the early 1900s. Before I got this set, I had a small set of truly vintage Polycolors, though not from as far back as the early 1900s; my set is more likely from the ‘60s or ‘70s. I thought it would be fun to put them side by side in this review.

First, the genuinely vintage set: Like other Koh-i-Noor sets of the same era (I also have Flexicolor and Mephisto sets), the 12 Polycolors come in a simple cardboard box with an easel back.

Made in the USA by a company that has been producing pencils since 1790, these pencils display beautiful typefaces and dingbats imprinted in gold on a simple, round barrel.

Although their cores are relatively thick, they are very hard, dry and low in pigment. Alas, I didn’t even sketch with them after making the initial swatches because I knew the task would be laborious and unenjoyable.

By contrast, the contemporary retro-look Polycolor set comes in a textured, dark red box emblazoned with an ornate gold crest of the L. & C. Hardtmuth family. According to the insert, “The upper part of the box is sealed with the signature of Franz Hardtmuth himself, whose portrait is featured on a product for the first time in this form in the modern history of KOH-I-NOOR HARDTMUTH, and therefore, confirms the unique character of this product. In addition, the refined nature of Polycolor pencils is highlighted by the coat of arms of the incorporator’s family, printed on the face of the packaging.” To its major credit, the set came in a plain, cardboard outer wrapper with a barcode so that the commemorative box could be barcode-free (a barcode would surely spoil the retro look, wouldn’t it?). 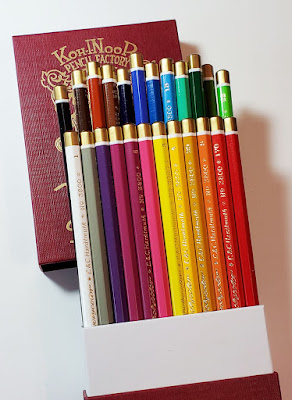 The semi-hex barrel displays typefaces and other elements that evoke that earlier era (as well as similarities to my set from the ‘60s or ‘70s). Unlike my old set, however, these have a nicely finished gold end cap. Contemporary Koh-i-Noor pencils are made in the Czech Republic. 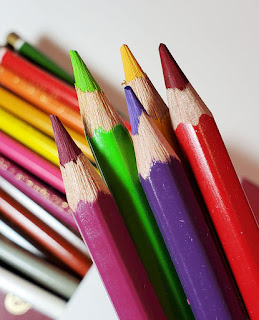 Initial scribbles indicated that the new, old-looking Polycolors were softer than the truly old ones and applied relatively well, so I made a test sketch. Oil-based Polycolors are still what I would classify as a harder pencil – similar to Faber-Castell Polychromos. The Polycolors blend sufficiently, but I find them less richly pigmented than Polychromos. It’s a nice commemorative edition, but I can’t get excited about the cores.

I haven’t tried Koh-i-Noor’s standard edition Polycolors, but other than the typeface, the barrel design is the same, so my guess is that the cores are also the same. Blick’s product information says that the standard edition is made of California cedar, and these Polycolors smell like they are made of the same.