According to collectors, the term “antique” should be reserved for an item that is at least a hundred years old. The term “vintage,” however, seems to get tossed about casually by eBay sellers and others dealing with collectibles without being defined. I certainly have pencils in my collection that are probably no more than 20 years old that were sold to me as “vintage,” and I use that term myself without really knowing how old something needs to be to qualify as “vintage.”

Today, however, I own a set of colored pencils that is certainly vintage by any definition and could possibly be an antique in a few years, if my sleuthing is accurate.

During a recent casual, habitual eBay search of “vintage” colored pencils, a new item appeared: a tin of Caran d’Ache Prismalo Aquarelle. I already own a set of “vintage” Prismalos that is probably no more than 20 to 40 years old, but these looked very different. Although the pencils didn’t look particularly old in the photo, the box lid had a design to it that I hadn’t seen before, so I read the seller’s description with curiosity: “After extensive research I am dating the tin to the 1930s based on the design typical of the era with the floral balcony and the logo in art deco red fonts which changed dramatically to a standardised ‘sans serif’ in 1940 carried out until the late fifties.”

I knew from Caran d’Ache’s book Atelier Caran d’Ache that the Swiss company had introduced innovative watercolor pencils to the world with its Prismalo line in 1931. If the eBay seller was correct, this set would be among the oldest to exist! I was, however, a bit skeptical; the pencils themselves showed no sign of use (as the seller stated). Although significantly yellowed, the box looked to be in good condition, too. (On photo appearance alone, the yellowed tin seemed to be the best indicator of the product’s age.) Could this set really be that old? I decided to do my own research:

A few years ago when the company was celebrating its 100th anniversary, a timeline of its product and logo history was shown on its website. (The page is no longer live, but an archive page still exists.) The description for the logo shown in 1958 says, “Since the 1940s, the Caran d’Ache logo is standardised and sports a sans-serif font typical for these years.” 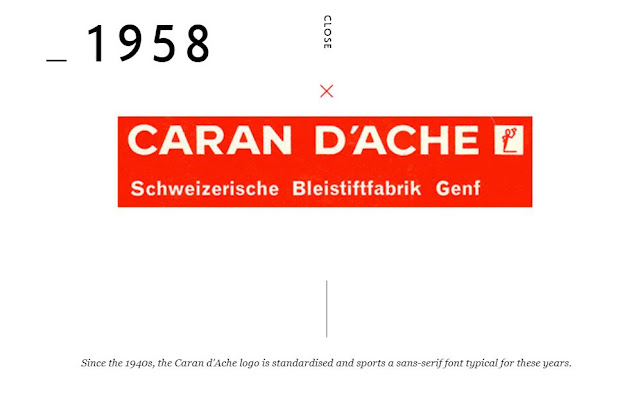 For 1977, a red and white drippy paint logo is shown, which looks like the one on the inside of the tin in question (as well as the inside of the vintage tin I already own). At first this made me suspect that the set was possibly a reproduction of a ‘30s set but manufactured decades later. However, the text describing the 1977 logo says the following: “For its Fine Arts Products, Caran d’Ache communicates since 1981 with a logo inspired by Emmanuel Poire’s signature, which design decorated old coloured pencils boxes from the 1930s.” Comparing closely the 1981 logo shown below and the one on the tin in question, they look similar but are not identical. The logo on the tin in question does not say “Swiss Made,” nor does it have the Bonne-Mine pencil guy (which appears on the box I own) that started appearing in 1974. This led me to think that the tin in question could be one of the “old coloured pencil boxes from the 1930s” that inspired the contemporary Poire signature logo. 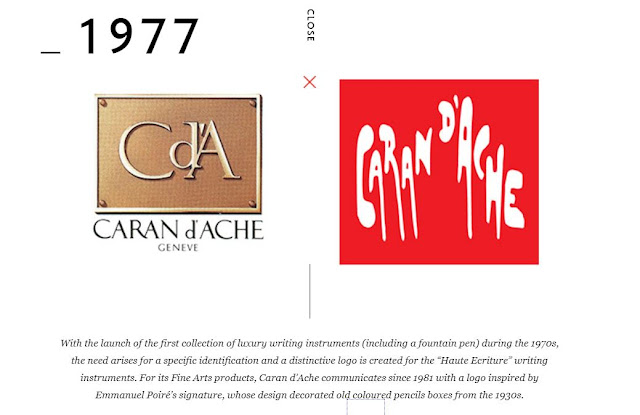 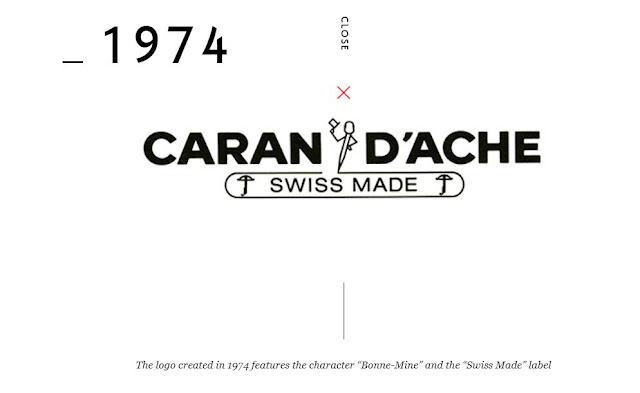 I remembered that the 100th anniversary commemorative set of Prismalo pencils I bought last year had come with a flier of product history, so I pulled that out. The design of the commemorative box was inspired by the “red and gold box from the 1930s” shown at the top – but look at the lower example shown. That box design, typeface and mountain image all look very similar to the tin in question. (Interestingly, that same flier copy refers to “majestic Mount [sic] Cervin,” which I believe should be Mont Cervin, the French name for the Matterhorn.)

Finally, there’s this bit from the Atelier Caran d’Ache book in its product historical information about Prismalo: “The link between Prismalo and the Matterhorn was created in the 1940s and the famous Swiss mountain has adorned the Prismalo colour cases ever since.” I believe this refers to the image of the Matterhorn from a more pointy angle that is shown on the box I own (below) as well as contemporary tins. From this, I deduced that the set being sold on eBay was older than the 1940s since its mountain has a less pointy peak.

All of my research concurred with the seller’s deduction that this set could well be from the 1930s, which would certainly make it among the *earliest watercolor pencils in existence. And certainly the oldest in my personal collection! I snapped it right up.

The design of the pencils themselves is simpler than that of the vintage set I had acquired previously and my contemporary set. The end is bare with an exposed core instead of a white end cap. The core is slightly thinner than either of the newer Prismalos. The barrel lacks the paintbrush icon that signifies a water-soluble core on all of Caran d’Ache’s contemporary water-soluble pencils. (It seems to me that the paintbrush icon has become nearly universal that way – most contemporary watercolor pencil manufacturers use it.)


As stated by the seller, the cores did not appear to be used at all. Curiously, the set includes two No. 17 reds and no greens at all; surely a set of 18 colors would include at least one green. A defective set? Perhaps the original owner noticed the defect and was going to take them back to the store for an exchange but never got around to it? (You know – this happens to all of us.)
While swatching and activating the pigments, I noticed immediately that the cores are much harder than the contemporary Prismalos and the newer vintage Prismalos. Activation indicates that they contain about the same level of pigment as the newer vintage Prismalos and less than the contemporary ones. (In my comparison below, I tried to match the hues as closely as possible, but I didn’t always have the same color number in all three sets.)

Finally, I made a sketch of a pear and an apple in a Stillman & Birn Beta sketchbook. The low pigment made it difficult to achieve intense color, but the hard cores made it easy to draw the fine line of the pear stem’s shaded side. I was able to finish this entire sketch without sharpening the pencils I used – they retain their points very well.
The whole time I was sketching, I marveled at the thought that these pencils might be more than 80 years old, and yet they still perform as well as they could have when they were newly purchased. Colored pencils are often dismissed as kids’ stuff, yet I can’t think of many other art media that would survive for 80 years and still be useable – certainly not paints or anything liquid. (I have no regrets about my enormous stash of colored pencils. . . a hundred years from now, they’ll probably all be working as well as they are today.)

I don’t know if I’ll ever learn more information to confirm or debunk my deduction that these Prismalos are from the 1930s, but for now, I enjoy believing that they are. (If you know more about Caran d’Ache history that could be helpful, I’m all ears!) One day when I fulfill my bucket list item of touring the Caran d’Ache factory in Geneva, I’ll bring this set along and ask someone there.
11/5/22 A very interesting discovery that seems to put my deduction in the right ballpark!
11/17/22 Update: A reader who has a collection of Caran d’Ache tins believes that, based on the typeface and pencil design, it’s more likely that my set is from the early ’50s rather than the ’30s. Maybe not quite antique, then, but I always appreciate having pencils older than I am. 😉
* Although Caran d’Ache developed the first watercolor pencils containing pigments for artistic purposes, “copying” pencils – water-soluble graphite pencils containing an aniline dye to make copies of documents – existed long before 1931. 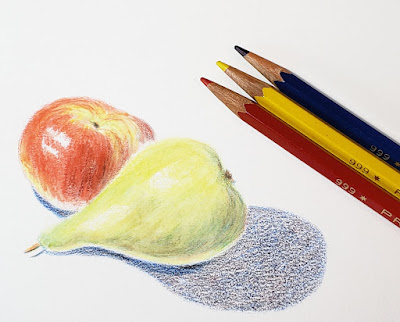