Luminance is the traditional colored pencil counterpart to my favorite water-soluble pencil, Museum Aquarelle, in the Caran d’Ache line – the very highest artist quality and including only hues with the highest levels of lightfastness. Like the Museum Aquarelles, the color range isn’t as wide as most colored pencil lines because the fugitive hues have been eliminated – no bright pinks, reds or purples. And also like the Museum line, Luminance pencils are so pricey that I’ve been acquiring them a few at a time. Thank goodness they are available open stock, which also enables me to get only the colors I really use.

One more similarity with the Museum Aquarelles is that their barrels are slightly larger than standard, so I’ve had a heck of time finding sharpeners that fit. I use the same Kum magnesium 2-hole sharpener that I use with the Museums or simply knife-sharpen them.

Swiss-made, these wax-based pencils are probably the softest colored pencils I have ever used, bar none. They apply almost like crayons, and after several layers, they start to take on a shiny, waxy surface, again like crayons. Because softness of application is one of my most valued qualities in colored pencils, Luminance pencils seem like they should easily be my favorite, just as the Museum Aquarelles are. But the more I use them, the more I think that softness isn’t necessarily the most important quality, at least with traditional colored pencils.

For one thing, they are so soft that they can’t retain a point, so defining small details is difficult, if not impossible. After multiple layers, Luminance layers start to feel like they are sliding off each other instead of building up. Although my apple sketch shows that the shaded areas blended well, coverage of the toothy Stillman & Birn Alpha paper was challenging. It could have used another layer or two, but I was trying to stay within the same time range to keep my test sketches comparable.
I don’t know if ability to erase easily is related to the ratio of pigment to filler, the softness of the core, or both (or something else entirely), but my erasing test shows that Luminance is much more difficult to erase compared to all the other pencils I’m reviewing.

There’s no doubt that these are gorgeous pencils, inside and out. The richness and depth of the hues is unbeatable. I love the brilliance of the red shown here, which I can’t seem to get with harder pencils unless I add more layers. The lightly varnished natural wood barrel is unpainted except for the end cap indicating the core color.

It’s just as well that the Luminance color range is limited, because I think these are best used in combination with a slightly harder pencil, both to extend the range of hues and to give detail when needed. I’m still experimenting, but I think I’ve had the best luck applying a layer or two of a harder pencil first for better coverage, then applying Luminance layers over them. 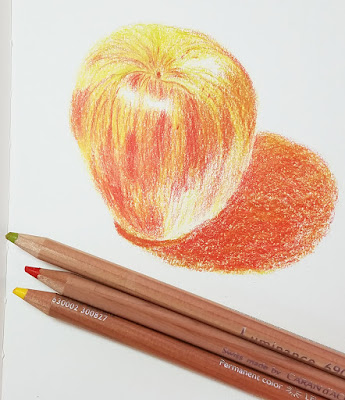 Edited 12/21/19: While digging through my Luminance pencils to make a sketch, I suddenly discovered that two have a flat colored end, while the rest have a colored end cap. I bought all of them open stock, so I'm not surprised to have more than one design. What did surprise me was that the design had changed at some point, because I thought I had acquired Luminance when they were still fairly new, and the design wouldn't have had time to change. I consulted Atelier Caran d'Ache: The Workshop Book, for its history of Caran d'Ache products, and I was even more surprised to learn that Luminance pencils have been around since 2008. I guess I was confusing them with Caran d'Ache Museum Aquarelles, which were introduced in 2013 (which means I started using them very shortly after they were released).

Now that I'm much more of a colored pencil historian than I was in 2017 when I wrote this review, it's important to me to show the differences in the end caps. The flat cap must be an older design that was changed to show more of the core's hue. Good move -- that flat color cap is nearly useless unless the pencils are stored point down in a cup. 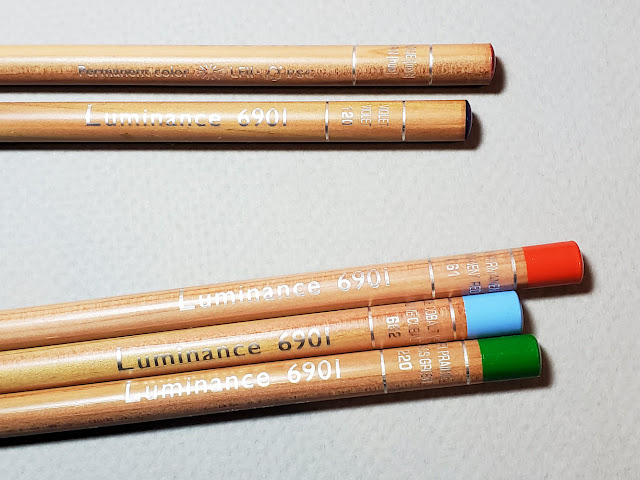 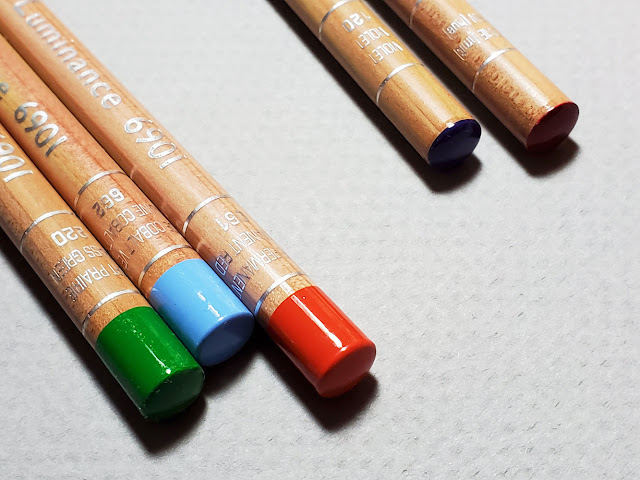