Notable Pencils: The Many Dresses of Blackwing Colors

I gave Blackwing Colors a full review a few years ago, so I won’t say much about pencil performance in this post. What is “notable” about this colored pencil set put out by the brand that is better known for high-end graphite pencils is the variety of packaging and appearances it has had.

When I wrote that review in 2017, I didn’t know yet that California Republic had released traditional and water-soluble (Aquas) sets of colored pencils under the Palomino brand several years before the set I reviewed. With a round barrel, silver band and finished, rounded end cap, the look reminds me a bit of Faber-Castell Polychromos. The barrels of both the traditional colored pencils and the Aquas look identical except the latter include a paintbrush icon.
I was told that these Palomino sets came out prior to the first Palomino Blackwing graphite release in 2010. They bear the same horse logo (at right) that also appeared on the Blackwing graphite pencils of 2010 - 2015. I acquired both through swaps long after they were no longer available at retail. They came packaged in flimsy plastic cases (above).

At some point I acquired a more durable wood-boxed set on eBay that must have been released as a gifty item around the same time (below). I’m not aware of a corresponding gift set of the Aquas. (4/15/20 correction: A friend on social media has pointed out that there was a gift set of Aquas!) 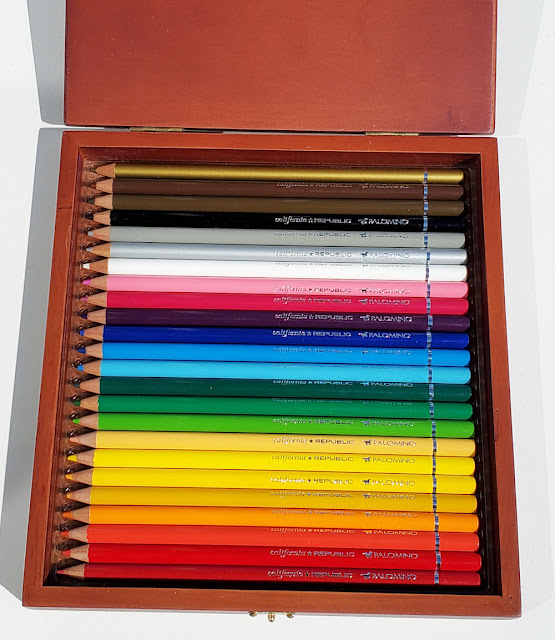 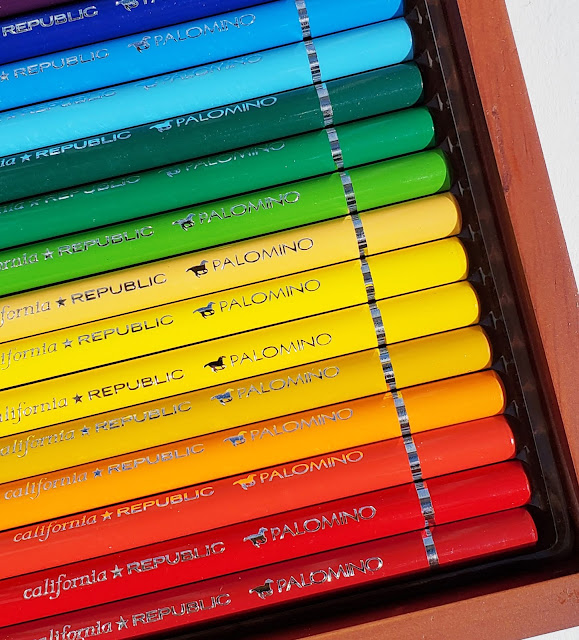 Next came the Blackwing Colors set I reviewed in 2017 that had been released the year before. This matte black windowed box is one of the nicest presentations I’ve seen for a small set of colored pencils. The windowed “door” opens to silver-capped, hexagonal pencils – a complete change in appearance from the prior Palomino sets. The Palomino pony disappeared (as it did from the graphite Blackwings of 2016), and the simple italic-slanted Blackwing logo is imprinted in silver.

In early 2020, Blackwing changed its corporate identity and logo and re-released all its standard edition graphite pencils with new logos and redesigned packaging. A curious thing happened with the Colors, however: First the unchanged 12 pencils were re-packaged in the old Blackwing box – the same kind that the standard edition and limited edition Volumes had come in prior to the 2020 change – with a new Colors sleeve. 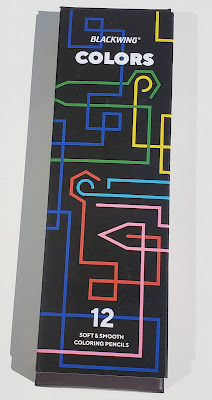 Although I wasn’t necessarily fond of the new branding, I couldn’t help feeling a bit miffed: What – aren’t colored pencils good enough to wear the new look, too? Just give the hand-me-down old boxes to the stepsister Colors, shall we? (OK, so I took it a bit personally.)

It turned out that the stepsister repackaging was a transitional step: Very shortly later, the Colors, too, were re-released bearing the new logo in a redesigned windowed box similar to the one of 2016 but with new branding. I’m not sure why the transitional packaging was necessary, especially for such a short time (maybe a month or two?), but I am already imagining the tizzy of future colored pencil historians asking the same thing (as they frantically hunt down the sleeved box on eBay).

The questions I ask today are these: Whatever happened to the Aquas, and why was it apparently dropped as a Blackwing product line? Granted, it is not a high-quality watercolor pencil, but it would have been fun to collect all of its many clothes, too. And perhaps a wistful, rhetorical question: Will Blackwing ever come out with more colors for Colors? It seems doubtful, though I wouldn’t be surprised if new packaging comes along again sometime.