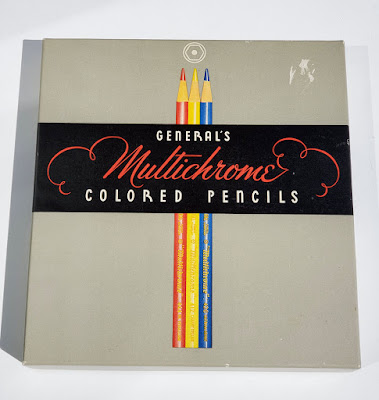 When I acquire a vintage colored pencil, it’s always intriguing from a historical or at least pencil-geeky perspective, but I never expect its performance to be anything better than mediocre (or worse). Pencil-making technology has improved enough over the years that it’s rare to find old pencils that are as good as contemporary ones. I’m fine with that, though; while it’s always fun to give old pencils a try, usability is not the primary reason I collect them. Finding the rare exception, though, is what makes collecting exciting!

First, here’s a back story: A few months ago, I reviewed vintage sets of General’s Kimberly watercolor pencils and Color-tex pencils, which I had purchased easily and inexpensively on eBay. It was mostly a fit of sudden patriotism that drove me to want them; I realized that General’s is the only pencil company that still manufactures colored pencils in the U.S. As fully expected, the pencils weren’t great to use, and sadly, General’s contemporary colored pencils are equally mediocre.

I did note, however, that the back of the vintage packages listed “thick lead” Multichrome as another colored pencil type that the company had made back then. This was intriguing because Multichrome is not a current General’s offering, even though Kimberly’s and Color-tex both are.

While old sets of Kimberly’s and Color-tex are common and plentiful, I had never seen a Multichrome set of any size on eBay. Imagine my surprise when an unused set of 48 Multichrome pencils – the largest set made – suddenly appeared one day! And imagine my ecstasy when I discovered that General’s Multichrome colored pencils are a delight to use!

In appearance, they seem to emulate the Prismacolor model: glossy, round, core-matched barrels with unfinished ends. The “Multichrome” typeface (with quotation marks) is gorgeous!

As promised in the description, Multichromes have “thick leads,” uncommon among vintage pencils, that are comparable in size to Prismacolors.

The set came with a large flier (below) showing the 50 colors that Multichromes come in (yet only 48 are in the largest set? How annoying – why not put all 50 in!?). Five pencils in the set had been factory-sharpened but showed no sign of use. The rest were unsharpened. (Yes, I always pause before I sharpen old, unused pencils for a moment of silent reverence. Then I quickly sharpen before I lose my nerve. Pencils are made to be used.) 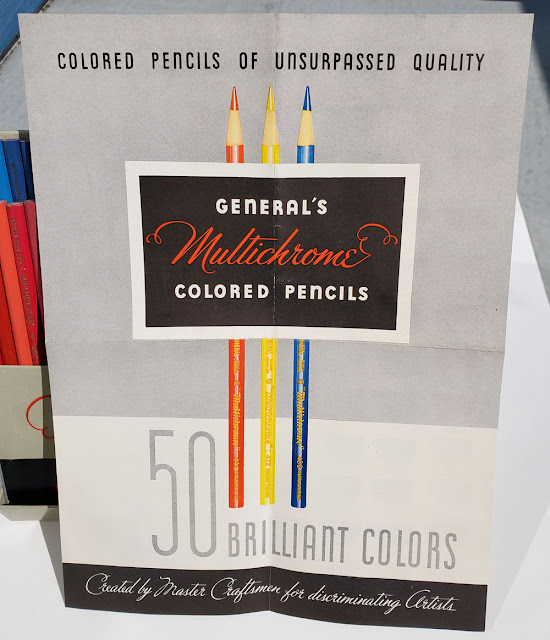 Soft without being waxy, they are a touch harder than Prismacolors. Although they don’t blend as easily as some artist grade pencils I’ve used, they apply smoothly and are heavily pigmented. I would say they would have easily competed with Eagle/Berol Prismacolors in their day.

There’s one more way in which the Multichromes resemble Prismacolors that will not be apparent from my photos: They smell exactly the same! Somewhere close to licorice, Good & Plenty or some other candy attached to the lower brain stem of my memory, the scent is intoxicating. (In the privacy of my studio, I have been caught deeply inhaling.)

As I happily sketched the apple with this amazing find, many questions came to mind, chiefly: Why did General’s stop producing such an excellent product while continuing to produce two mediocre ones? When did they stop? And how old is the set I acquired?

Further poking around eBay, I found this intriguing item: An original advertisement for General’s Multichrome pencils. Familiar? It looks exactly like the flier that came with my set. The advertisement’s seller stated that the ad was from 1947. When I inquired how he knew the ad’s age, he said it was dated by the magazine in which the ad appeared.

On one side of the box I found a handwritten price: $8. That seems a bit high for the 1940s; using an online inflation calculator, the price of the set would cost more than $90 in today’s dollars. I’ve certainly paid the equivalent for contemporary pencils, but I have no idea how much artist-grade pencils would have gone for in 1947. It’s thrilling to think that they might be that old though, isn’t it? And more thrilling still to know that I’m the first to use them – and will joyfully continue to use them. 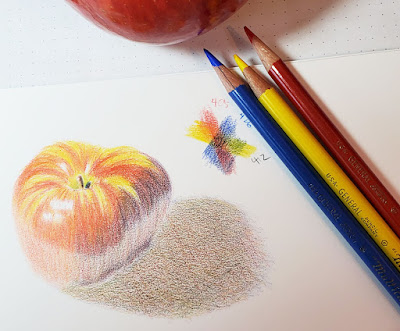