I hope your blood sugar level is stable . . . get ready for some eye candy!

Unless a box is really special, you know that my reviews don’t spend much time on colored pencil packaging; I like to focus on the product. Fair warning: The product I’m reviewing is almost all about the packaging – the Marco Tribute Masters Collection. And it is one of the most beautiful presentations of colored pencils I have ever seen!

The collection includes eight slipcased boxes, each color-themed selection devoted to a modern art master. According to the card inside each box, “Marco selects eight legendary artists in modern art and leverages their masterpieces as inspirations to create ‘Tribute Master Collection.’ May your ideas fly together with inspiration from the masters.”

The book-like boxes remind me of Tombow’s Irojiten set, which I also love for its elegant beauty. I must say, however, that Marco does Tombow one better: Instead of an elastic band to hold the box closed, each Marco box has a magnetic closure that snaps securely shut with a satisfying click.

Inside the box lid is a brief statement about the artist’s life. On the back is a quotation by the artist.

Each box of 10 pencils holds tints, shades and saturations of one or two hues. For example, Monet’s box includes pinks and violets, while Cezanne’s has shades of blue and blue-green. Here’s where I think the designers could have tried harder (and would certainly have had more fun) to make each box evoke a particular master’s palette, not just shades of one hue. Surely Van Gogh’s box would have included yellows as well as blues? Still, it’s immensely visually pleasing to see harmonious tones arranged together.

Several years ago when I first got a set of Marco Renoir Fine Art colored pencils (I can’t find the set of 72 I got on Amazon, but this link goes to the 100-color set), I did some research to learn more about these pencils. Apparently Chinese manufacturer Marco also produces pencils for other brands, and the Marco Renoir set is identical to a set sold by Dutch art supply company Royal Talens/Bruynzeel (which is owned by the Japanese company Sakura).

Comparing the pencils in the Tribute Masters Collection to those in my Marco Renoir set, I saw that the pencils are identical in every way except the barrel appearance. When I compared swatches, the cores that were duplicated were identical. It’s also worth noting the price difference: I paid about $40 for my Marco Renoir set of 72 several years ago; the Tribute Masters set is about $90 for 80 pencils.

Lest you think that all I am doing is drooling over the packaging, I did, in fact, make a sketch (of an unusual San Marzano Radosta variety of heirloom tomato that looks just like a pepper). Like the Marco Renoir set, the Tribute Masters pencils are neither stellar nor terrible; instead, they fall into that vast middle area of pretty-good/not-bad colored pencils that are neither soft nor hard. Not exactly a ringing endorsement, but who cares when the packaging is this unique and distinctive?
Here’s the rest of the candy! 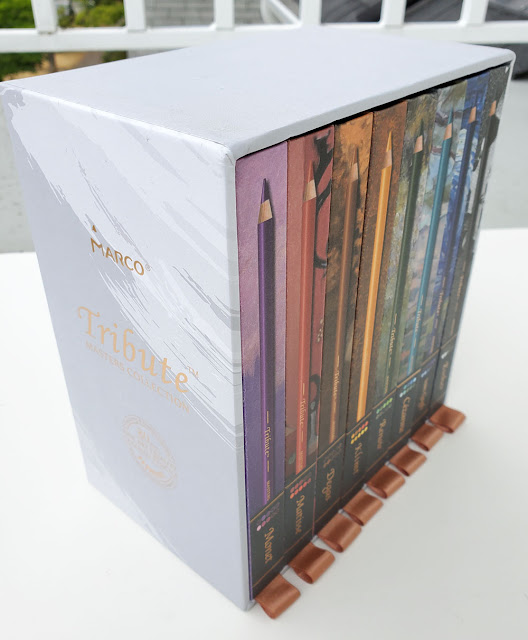