You all know of my love for rainbow pencils. I’ve tried many, and while I love them all in principle, some are mostly a colorful novelty and not recommended for use. A long-time favorite has been the seven-color one made by Camel that is sold under various brand names (CW Pencils carries a custom version of it). Soft and richly pigmented, it is also unique in being a true rainbow arranged in a wheel so that each hue could be used independently (sort of, in theory; I wouldn’t bother, though). I reach for it most often when I want a rainbow pencil to use and not just ogle with heart-shaped eyes.

I may now have a new favorite – not necessarily to replace the Camel but to use in a different way: Kokuyo Dual Color Pencils. Made in Japan, the Kokuyo set includes 20 pencils (an alternate set includes 20 mini-size pencils). Each core is made of two hues mixed in a checkerboard fashion revealed by the unfinished end. (I’m not ashamed to admit that I squealed with delight when I discovered the ends!).

The attractive barrel is also unique: Half the unvarnished cedar (wood type unstated, but my nose says it’s cedar) is painted with a geometric pattern. I have lately seen more pencils, both colored and graphite, with a half-painted natural barrel that I find fresh and modern.
The Dual Colors call to mind two other rainbow pencils in my collection, both Czech-made by Koh-i-Noor: the Tri-Tone and the Magic. With three hues in the Tri-Tones and two or more hues in the Magic pencils, each core swirls the colors together. The Kokuyo Dual Colors, however, are much softer than either.
In making my scribbled swatches (made in a Stillman & Birn Epsilon sketchbook), it was easy to reveal the two tones by rotating the pencil as I scribbled. I wouldn’t bother trying to isolate the individual hues; these are meant to be used together. Pencils containing analogous hues or two shades of the same hue work best; complementary pairs are less appealing. And I don’t have much need for the one containing two shades of similar grays.
Although these pencils are fun to use in the typical unicorn-rainbowy fashion (by that I mean gleefully and without regard for precise color application), they can also be used in another way: allowing the dual tones to work together harmoniously to add richness. When I saw this potential, I picked out three pencils that came closest to the CMYK primary triad that I have been exploring lately – a yellow/orange, a magenta/yellow, and a blue/violet – and sketched a peach. I’m not sure the triadic part of the experiment worked as it typically might, but if I were choosing colors in a more conventional manner, I could easily see using six or seven pencils to capture this peach with a range from yellow to violet. Here, I’ve done it with three; I probably could have done it without the yellow/orange. The soft cores layered beautifully in a Stillman & Birn Zeta sketchbook. And somehow it’s more fun to use two colors in one stick that mix without effort.

I repeat: I love rainbow pencils. And I especially love these. 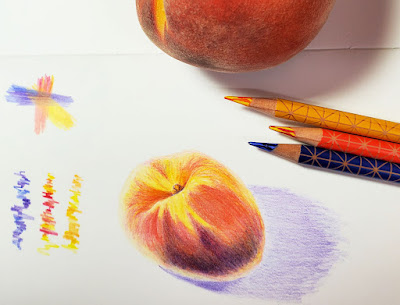 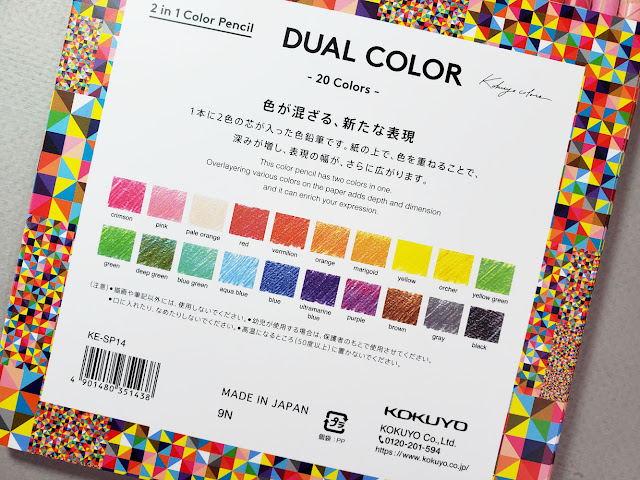