This year Caran d’Ache commemorated the 30th anniversary of its Supracolor line by releasing a box of new, limited-edition colors (which, naturally, I couldn’t resist). Earlier this month I learned that another art supply company was celebrating the 30th anniversary of one of its own colored pencil lines – Tombow’s Irojiten. How could I celebrate one colored pencil anniversary but ignore the other? Fortunately for my credit card, Tombow didn’t put out new colors, but I did haul out the set of Irojiten pencils I’ve owned for years (since even before I began sketching), mainly to give them a second chance (and finally write a review).

This is hard for me to admit because it’s acknowledging how shallow I am, but when I first bought the set, it was 99 percent for the packaging. Irojiten means “color dictionary” in Japanese, so the collection’s 90 colors are arranged in three slipcased sets, three “volumes” per set. In subdued, earthy tints that the Japanese favor, the “book covers” feel like fabric, and they look like beautiful books. With most colored pencils, I like to take them out of whatever tins or boxes they came in and store them in wide mugs or vases on my desk so that I can see and grab them easily. The Irojiten set is the exception: They need to be kept in their lovely volumes.

Each volume is a clamshell box held closed with an elastic strap. (The elastic on the left will probably strike Westerners as being backwards; the “book” opens from left to right.) Inside the lid are the color names and numbers in English and Japanese. 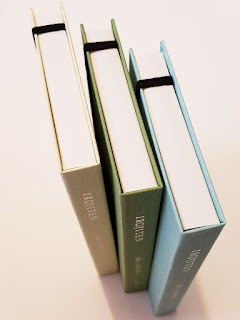 The round-barreled pencils are heavily lacquered in shiny white with a colored end cap indicating the color. The color name and number are printed in silver on the barrels. 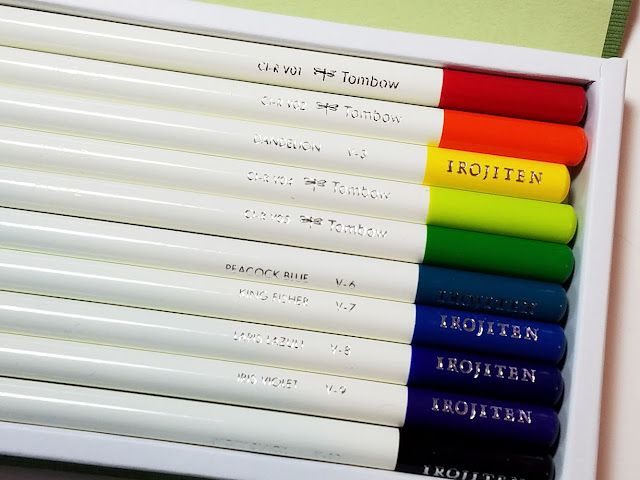 While 90 colors is a relatively narrow range compared to, say, Caran d’Ache Supracolor, Prismacolor or Holbein (which each have 150), it’s a perfectly functional and varied range with no near-duplicates. While the labels Tombow uses – “vivid,” “pale” or “deep” – don’t do much for me, I am enamored with the selection of colors within each three-volume set. For example, volumes 1 – 3 (which are the most versatile, in my opinion) include 10 primaries that you’d expect in any basic set, 10 medium tints of primaries, and 10 shades. It’s like a color wheel lesson in a slipcased box. You could buy this single three-volume set and have a solid range of 30 colors, including some unusual hues that you might see only in another brand’s larger set.

Likewise, volumes 4 – 6 are an intriguing range of color intensities (though less versatile if it’s the only set purchased).

The least versatile range for my use is volumes 7 – 9, including 10 fluorescent colors, which I had an odd experience with a couple of years ago.

As you know, one of my favorite urban sketching subjects is heavy equipment at construction sites. Often the barriers, signage and workers’ vests are fluorescent orange, and one day I remembered these neon Irojiten colors. I carried the orange with me for a while, and the next time I sketched a construction scene, I happily pulled it out. It looked great on paper, but the strange part was when I scanned and photographed my sketch – the color did not look fluorescent at all. In my samples below, the photographed green and pink are closer to the colors on the page, but the orange (which looks fairly close to the pencil’s end cap) is entirely different on paper. It didn’t seem worth carrying this one additional pencil if the color was so inaccurate when photographed or scanned. Very strange.

Neon colors notwithstanding, the Irojiten set seems like it should be versatile and useful (beyond having the most gorgeous packaging in my collection), but for some reason, I never warmed to it. During early trials, I was convinced that the cores were harder than I liked, and I was having difficulty finding them open stock, which bothered me in principle (never mind that I didn’t use them enough to need replacements). I loved them so much in appearance, though, that I didn’t care if I ever used them again; some pencils are perfectly acceptable as nothing but home décor.

With Tombow’s recent promotion of Irojiten’s 30th birthday, however, I started thinking it was time to give them another chance. Maybe my taste or tolerance for harder pencils has changed over time (and with more experience – I know now that there’s a place for different degrees of hardness), because this time they didn’t feel hard to me at all – I’d say they fall somewhere between Faber-Castell Polychromos (harder) and Caran d’Ache Pablo (softer). In fact, I started a sketch in a toothy Stillman & Birn Alpha sketchbook and thought it wasn’t a good match – it was taking longer than I wanted to cover the texture with the soft core. I switched to smoother Epsilon (my apple sketch shown below) and was happier with the coverage, which also went faster. Creamy without being waxy, they apply and blend well.

With the passage of time, another advantage became apparent: Irojiten pencils are readily available by open stock (on Amazon and elsewhere). Since I don’t like to recommend pencil sets that can’t be replaced individually, now my conscience won’t bother me to recommend these. In fact, normally I would recommend buying a small set of any pencil and then supplementing with individual colors that suit your typical subject matter and preferences rather than buying a huge set. But in the case of Irojiten, I’d be hard pressed to make my usual recommendation . . . how could anyone buy just one set of these lovely volumes and then add a few random singles? Where would you store them?

I must say that if I were Tombow, I’d have issued additional volumes of colors by now. It seems like a missed opportunity. If I owned a small set of another brand and wanted more colors, upgrading would mean buying a larger set that probably includes duplicates, or else buying economical open-stock singles, which would hardly be a marketing opportunity. But with Irojiten, it would be so tempting and easy to add new volumes of unique colors without hesitation.

Thinking about this brought to mind Fellissimo, which is a Japanese colored pencil brand with 500 colors. They are sold only by subscription. Fellissimo hues are known for having evocative but ridiculously unhelpful names such as “Sunshine Swims” and “New Bike.” Every month, subscribers receive 20 unique pencil colors (price: 2,808 yen per month), and at the end of 25 months, they would own the full set, “the magnificent experience of a lifetime” (according to its website).

When I first heard about Fellissimo, my head exploded. For about two hours, I was completely obsessed with the possibility of becoming a subscriber. Google searches led me to realize that a large part of the subscriber experience was using the pencils not as an art material but as home décor (which, as you know, is a concept that I’m not unfamiliar with). Further research (including a chat with someone who had received samples during an early promotion) indicated that the pencils are, in fact, better as home décor than as an art material (hard, scratchy, lacking pigment). Discouraged, I considered subscribing only long enough to receive one month’s worth, just to experience a tiny fraction of that magnificent lifetime, then quitting.

Unfortunately, the final nail in the proverbial colored pencil coffin was that there is apparently no way to end a subscription once it is begun (at least, the English-language Fellissimo site offers no FAQ or fine print related to such). I stuffed the pieces of my head back into my skull, and that was the end of that.

How does that relate to Tombow Irojiten pencils? Not at all, except that Irojiten are both home décor and an art material that I am now happy to use.

You must see Fellissimo (but wait until you have time for a head explosion).

1/18/19 update: See my review at the Well-Appointed Desk of the 36 new colors added to the Irojiten line.