A few weeks ago, Blackwing put out a new edition in its ultra-limited Lab series – a non-photo blue pencil. With other limited editions being new paint jobs on the four standard graphite cores, I was surprised and delighted to see something as different and specialized as a non-photo blue core. Even more surprising was how quickly the 2,500 boxes sold out – in less than a day! I don’t use non-photo blues enough to spring for a whole dozen, but I was curious enough to split a box with a friend.


Although this is not a full review of the newest Blackwing (see my post of how I use non-photo blue pencils and my review of five at the Well-Appointed Desk), I did a quick comparison to see how it stacks up next to some other notable blue pencils.

When I first saw the promotion, my immediate speculation was that the pale blue core would be identical to that of the same hue in Blackwing’s colored pencil set, Colors. I was wrong; the non-photo Lab is slightly warmer. However, in terms of softness, pigment content and “feel,” the two cores seem identical and probably have the same formulation. (And they obviously look to be made of the same beautiful cedar.)

Next, I compared the Blackwing to two of my favorite non-photo blue pencils: the Caran d’Ache Sketcher and the Staedtler. It’s close in hue to Caran d’Ache’s NPB and about the same in softness.


Finally, I took a Tombow Mono Zero eraser to all four samples, and I must say that the Blackwing didn’t do too well. Both the Caran d’Ache and the Staedtler erased more easily and completely. Erasing draft lines made with a non-photo blue pencil is not a high priority for me, since I usually draw and color right over the lines and leave them be, but it’s probably important to some. 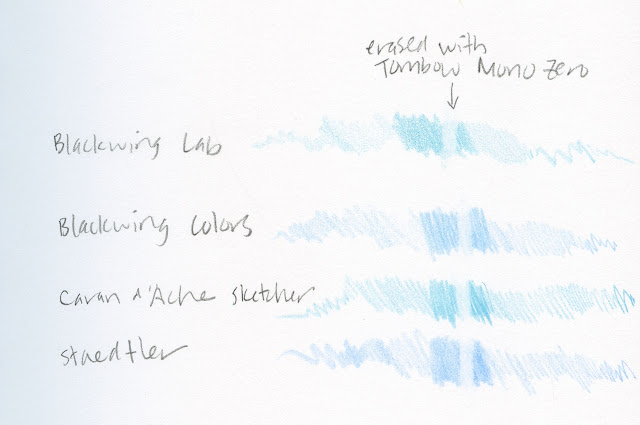 I do, however, like the softness of the Blackwing as well as the hue, so I will happily use Lab edition 07.29.21.

Incidentally, the non-photo blue Blackwing’s lovely barrel is a natural wood finish half-painted with matte light blue. I have recently seen several pencils, both graphite and colored, with the same basic design, and I find it fresh and modern. I think I have more examples in my collection, but here are a few I pulled out.