During my casual browsing of eBay listings for vintage Prismacolors, I occasionally see Eagle- and Berol-branded sets that were made in Canada. I was curious whether Canada-made Prismacolors were different in any way from Eagles and Berols made in the US during the same era.

According to Erick Lee, whose blog, Pencils, Eh, is a wealth of information about vintage Canadian pencils, Prismacolors were produced in Canada until mid-1992. In response to an inquiry, Erick kindly translated part of a La Tribune (Sherbrooke, Quebec) newspaper article from July 28, 1992: “While manufacturing production at the Bérol factory in Drummondville was to cease no later than June 1992, it was extended until mid-August, production director Yvon Fournier said yesterday. The company announced, on October 2, 1991, the end of its production at its factory on Janelle Street, leaving only the storage and packaging of the company’s products, made in the United States, which reduced its staff from 88 to 30, meaning 58 direct job losses.”

That was a sad day for Canadian Prismacolor users, I’m sure (not to mention the factory workers).

The reason for my inquiry was that I had snapped up a mint-condition set of Berol Prismacolors on eBay one day. The box was clearly labeled made in Canada. When I opened the sealed box, however, I was disappointed to find that all but one pencil were made in the USA. Erick surmised, “I'm guessing the pencils are from mid-1992. That is when Berol ceased production but they kept packaging American pencils. Canadian packaging has to be bilingual so they just trucked in the pencils from the US and put them in Canadian packages to sell in Canada. They must have had leftover packages that said made in Canada during the transition.”

I couldn’t blame the seller since the box had been sealed, but I realized that if I wanted to try some Canada-made Prismacolors, I would have to look for open lots showing images of pencils stamped “made in Canada.”

Over time, I did acquire exactly that – small lots of random, used Prismacolors that I purchased, and others were given to me by a friend. One recent rainy day, I pulled out a selection of colors among my Canadian Eagles and Berols and tried to match as many as I could to specimens from the same era in my USA-made Prismacolor stash. I didn’t have Eagles and Berols for all the colors I chose, so I filled in with vintage Sanfords in some cases.

Comparison swatches and a few notes are shown below (swatches made in Stillman & Birn Epsilon sketchbook). For the most part, I detected little difference between Canada- and USA-made pencils from corresponding eras. A few notable exceptions were Canadian Eagle-branded 912, 910 and 932 (two greens and a violet) that seemed a bit gritty rather than the expected smooth and creamy of their US-made counterparts. The Canadian Dark Green 908, both Eagle and Berol, felt slightly dry. Insignificant differences overall, I’d say. 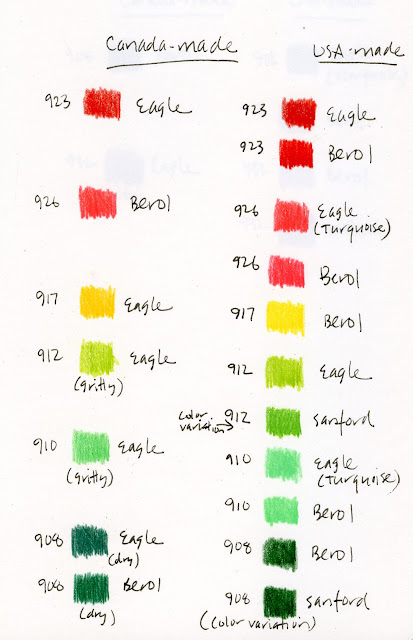 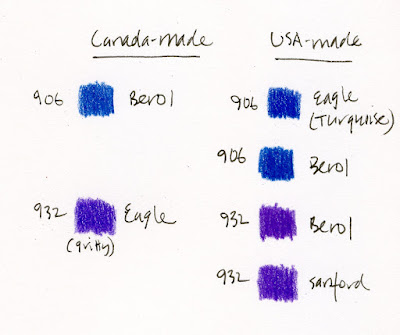 A more surprising (and potentially alarming) shift was in some hues – mostly among the US-made colors I compared. The most significant was Apple Green 912: the US-made Eagle and Sanford look like two different colors to me. Dark Green 908 showed a smaller shift from Berol to Sanford on the US side, and a similar shift from Eagle to Berol on the Canadian side. Both 908s on the US side look different from the 908s on the Canadian side. There’s a similar difference between the Canadian and US Yellow Orange 917. These shifts are not a huge deal – unless you happen to be working on a piece with large areas of one color and were trying to seamlessly blend different pencils of supposedly the same hue. (Thankfully, that’s not me and is unlikely to ever be, but I’m certainly sympathetic to any artist in this situation.)
I noticed another interesting difference among the Canadian pencils: While all the Canadian and US Eagle specimens I have are labeled with color names in English only, the Canadian Berols have no color names. Since bilingual French and English labeling was mandated in 1969, perhaps Berol decided it was easier to leave the colors unnamed during the transition. (All pencils include Prismacolors’ universal color numbers, of course.) Every USA-made Prismacolor I’ve ever seen, vintage or otherwise, has been consistently labeled with both color number and name. USA-made Prismacolors from Berol through contemporary include color names in both English and French, so obviously the same pencils could be sold in both the US and Canada.

The image shown below is strictly eye candy (or maybe eye chewing gum, depending on your point of view). I know that most collectors want their specimens to be as clean and pristine as possible, but I adore evidence of previous owners (well, except maybe bite marks). Alex and Sylvie have made their ownership known. I feel a small kinship with these Canadians, and I’m delighted to be using their pencils after all these years.