A lifelong journal keeper, my mom used various diary and journal formats throughout her life. One I remember her using when I was a child was a small, five-year diary. Each page was headed by the date, and below that were five small spaces, one for each year. My mother, a practical woman, probably liked the five-year format because it was small, compact and less expensive than keeping a bunch of single-year diaries.

She wrote in Japanese so I couldn’t have read it if I had wanted to, but I had the impression that she noted things like the weather, which of us had a cold or stomachache that week, current events, the books she was reading, things like that. Sometimes she also used it to have the final word: If someone whined, “I can’t believe how cold it is! It’s never this cold in October!” she would pull out her diary, refer to the same date a few years prior, and say, “No – it was even colder than this back in 19__.” End of discussion.

A lifelong journal keeper myself, I’ve tried many different formats, too. Every now and then I have looked at the five-year diary format, but I never made the commitment. I already keep a DIY journal/log book, but I prefer to keep a single year in one volume with more space for freeform writing when needed. What would I write in a five-year diary that would be different from the kinds of things I already note in my ongoing log (places I’ve sketched, books and movies I’ve consumed, current events, people I’ve socialized with, the weather – you can see my mom’s influence, I’m sure)? And yet, I clearly see the appeal of having five years of entries for a given date on a single page: More than a snapshot of a day, the format captures patterns over a five-year period.

Several months ago when I was shopping for a Leuchtturm A5 blank journal (one of my favorites for my DIY log book), the Some Lines a Day 5-Year Memory Book came to my attention. Its familiar A5 size, paper and hardcover material were attractive to me. Maybe it was finally time to give the format a try. (Edited 11/13/20: My review of the notebook itself is published at the Well-Appointed Desk.) 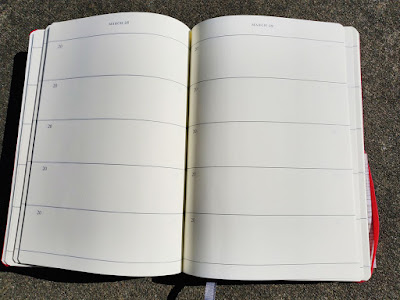 What would I want to record and later read over the course of five years? I thought about it long and hard. This pandemic year seems like such a crazy time to think about any kind of diary. On the one hand, I’m not doing much of anything worth documenting. On the other hand, I’m doing so many things differently out of necessity. I suppose it might be interesting to compare those mundanities in future years . . .

Then I started thinking about something about myself that has distressed me. This year I have had many unkind, ugly and even vicious thoughts about certain individuals and many people that I don’t even know – based on what I perceive to be their beliefs. In the moment, I feel better, but later, I realize I do not want to have such thoughts.

My Leuchtturm Some Lines a Day will be devoted to thinking one kind thought about someone each day. It could be a loved one, the mail carrier, a social media acquaintance, the Instacart delivery person, or another total stranger, but I know that if I commit to writing one kind thought at the end of each day, I will be more mindful during the day about having such thoughts. When I read my entries later, perhaps the thoughts from a prior year will prompt me to call someone I haven’t talked to in a while. Or perhaps I’ll see some type of interesting pattern that will give me insight. My hope is that I will become a kinder person over time.

I also decided that I don’t need to wait until Jan. 1 to begin. The Gregorian calendar is a practical device, but each of us began our actual first day of the year when we were born. My birthday is just around the corner; I’m going to begin my Leuchtturm Some Lines a Day on that day.

Email ThisBlogThis!Share to TwitterShare to FacebookShare to Pinterest
Labels: introspective