Like the Mitsubishi Uni Water Color Pencils I reviewed recently, I’ve had a set of Uni non-water-soluble colored pencils for years, yet I never got around to reviewing them until now. My initial impression of them was lukewarm at best, and I couldn’t quite muster up enough enthusiasm (if I loved them) or outrage (if I hated them) to review them immediately. I was recently asked my opinion of them, however, which made me realize I had never reviewed them. I also reminded myself that when I finally did get around to reviewing the Uni Water Color Pencils, I was surprised that they were better than my first impression. I further reminded myself that the more experience I have with colored pencils, the more tolerant I seem to become, and the better my results are with pencils of any kind, even ones that had disappointed me in the past. With or without enthusiasm or outrage, it was high time to review Uni Colored Pencils.


I don’t usually spend much time commenting on pencil packaging, but this set deserves attention. When the vinyl-covered clamshell lid is opened, the two trays of pencils in this 72-color set lift slightly away from the box, making it easy to withdraw individual pencils. The set of 100 has an even more mechanically elaborate box: four pencils share a tray that swings out from the rest. (I admit, I came close to buying the 100 just for the unique box, but somehow I managed to resist.)
In addition, each pencil has its own slot labeled with its color number and name (in both Japanese and English)! If you are the kind of person who likes all your pencils neatly stored and arranged, this box will be very satisfying – I don’t recall seeing any other set of colored pencils arranged and labeled in this way.
If you know me, of course, you will know that I am not that kind of person – I don’t do well with keeping colors stored in the order determined by a pencil manufacturer – but I appreciate the esthetic and organizational appeal. Also, having experienced many tins and boxes of both vintage and contemporary pencil sets that look nice but are nearly impossible to remove individual pencils from, I genuinely appreciate Mitsubishi’s box design. (If there’s one thing the Japanese do well, it is design user-friendly products.)

As for the design and appearance of the pencil itself, there were no surprises: They are as beautiful as anything you’d expect bearing the Uni name. The glossy barrel, the rounded end cap, the elegant double band, the gold imprint (all of which match the Uni Water Color Pencil’s design except that the barrel is round while the watercolor pencils are hexagonal) – all reinforce the esthetic and quality that I have come to know and love about Uni. 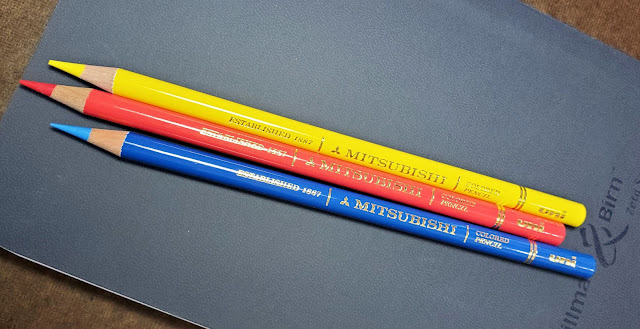 Each pencil is identified with its color number and name (which are essential for accurate refiling in the labeled box).
Appreciation for esthetics finally done, it was time to open a sketchbook and go get one of the gorgeous heirloom tomatoes I had just purchased at the farmers market. With the primary triad I learned in Kathleen Moore’s class firmly planted in my color mind lately, naturally I picked out three hues accordingly: Carmine (512), Lemon Yellow (504) and Blue (533). Carmine is warmer than Prismacolor’s Process Red, but it was as close as I could find.

Using a smooth Stillman & Birn Zeta sketchbook, the first layers of color went down well enough. Uni pencils are among the hardest I’ve used; they are similar to Faber-Castell Polychromos in that regard. Although many prefer a soft, creamy texture in colored pencils, I don’t necessarily deem hardness a flaw; a strongly pigmented pencil like Polychromos is useful for both fine details as well as multi-layered applications. So I didn’t hold the hard core against the Uni.


It didn’t take long using the Unis to be reminded of my initial impressions: Although it seems contradictory, Unis are hard, but they don’t seem to retain a point the way Polychromos can. I found myself sharpening them as often as I do soft Prismacolors. (Incidentally, every time I sharpen a pencil, my Fitbit registers the activity as 11 steps! Tina has discovered the pencil-sharpening workout! This was especially useful during our record-breaking heatwave, when sharpening pencils was my only physical activity.)

The more frustrating trait, however, is that it takes significant effort to build up color layers with the Unis, which indicates low pigment content. I spent 90 minutes on this small tomato sketch, but I still didn’t achieve the color depth that I had wanted. I had planned to draw the lime green plate under the tomato, but after that much work on the tomato, I didn’t have it in me to continue.

The exercise wasn’t a total frustration, however: I did enjoy using and mixing the primary triad. Even with Carmine being warmer than I was looking for, it mixed beautifully with both Lemon Yellow and Blue. The more I experiment with this triad principle, the more I love it.

I went through my image files to look for other sketches I had made with the Unis, and I found two from 2017, probably around the time I had first bought the set. One was made in a S&B Alpha, and an unfinished one was made in a S&B Epsilon (both tomatoes – imagine that!). According to my notes, I found it a bit easier to build color on the toothier Alpha. I was frustrated enough on Epsilon (which has the same smooth surface as Zeta) to abandon the sketch without finishing it – just as I did this time. And like this time, my notes say I could not seem to build layers adequately. Hmmm, a pattern is developing, and it’s not a good one.

I had thought that several more years of colored pencil use under my belt might have improved my application technique or simply increased my tolerance for pencil idiosyncrasies, which I sometimes enjoy as a challenge. But not in this case. I’ve been generous enough: These Uni colored pencils are not worth the effort. (If you know how much I love Uni graphite pencils, you would understand how much it breaks my heart to say that.)

The box they came in, however, is another matter. Some Amazon reviewers had the best idea: Empty out the mediocre Uni pencils and fill the slots with your favorites! If it weren’t for the fact that I don’t like to store or use my pencils that way, I would do that.

A note on price: When I bought my set of 72 several years ago, I paid less than $60. Now I see that Amazon’s price for the same set is $95. This disproportionate price increase is similar to what I’ve seen with the Holbein sets. I’m not sure what’s going on, but it doesn’t bode well with American consumers of Japanese colored pencils.