Conté crayons are probably familiar to anyone who has taken a traditional drawing class. According to Wikipedia, the sticks “were invented in 1795 by Nicolas-Jacques Conté, who created the combination of clay and graphite in response to the shortage of graphite caused by the Napoleonic Wars (when the British naval blockade of France prevented import).” Messy, dusty and smeary like pastels or charcoal, they are nice to use in a life-drawing studio where I don’t have to clean up. (They are definitely not nice for urban sketching.)

Beyond those classic drawing media, I didn’t know much about Conté products or even whether the French company produced a colored pencil. By “colored pencil,” I mean the type that combines pigment with wax in the way that is most familiar to me (I say this as clarification because the term crayon is French for “pencil,” so the kind I use and collect would also be called a crayon).

Recently a lightly used set of vintage Conté à Paris Aquarelle colored pencils crossed my eBay radar. They didn’t look very “vintage” in the photos; a UPC barcode was clearly visible on the box. But the fact that my collection lacked a Conté set and its inexpensive price made it an easy buy. 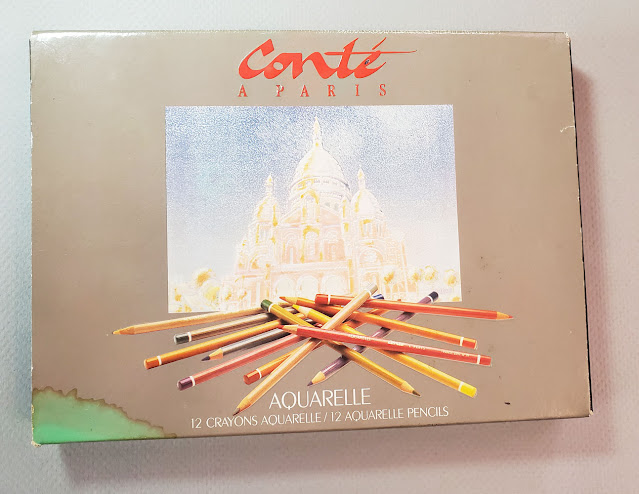 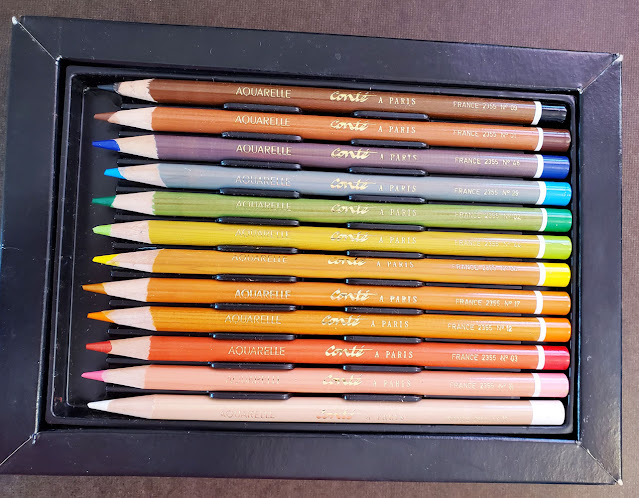 A fellow pencil enthusiast surmised that the set was made before 2004, based on Conté’s Nanterre address on the back of the box. The name of Bic, which acquired Conté in 1979, does not appear on the packaging. (“Bic Conté” aquarelle pencils, made in China, are currently available on Amazon.)
When I first opened the box, the barrels looked familiar, and I became alarmed that I had mistakenly purchased pastel pencils. That’s because they look very similar to those Conté crayons I’ve used for life drawing – with a round, slightly larger-diameter barrel and a rounded end cap. To my relief, they are colored pencils, not the messy crayons. Apparently Conté retained the traditional look of its crayons on its pencils, too.
Even better than the traditional sanguine, charcoal and other crayons, though, is that these pencils have a transparent, tinted varnish instead of paint on the barrels. Although several contemporary colored pencil lines have natural wood barrels with a colorless varnish, including Caran d’Ache Luminance and Derwent Lightfast, I don’t recall seeing any with a transparent tint that reveals the wood grain. It’s a beautiful finish that I would love to see on more colored pencils.

In swatch tests, I was pleasantly surprised by their softness. Another surprise was the thickness of the cores – even thicker than my beloved Caran d’Ache Museum Aquarelles! They apply with a bit more dust, however, than Caran d’Ache’s premium line.

Putting the pedal to the metal, I made a sketch of the garlic, scissors and cup. Although the pigment isn’t up to the Museum Aquarelle level, I’d put it close to Caran d’Ache Supracolor, which is an excellent pigment degree. The pigment dissolves well and blends beautifully. No lightfast rating information is indicated, but the list on the bottom of the packaging indicates that the line included 56 colors – a respectable range.

I’m guessing that Conté à Paris Aquarelle colored pencils were considered artist grade like the rest of the drawing pencils that bear the Conté à Paris brand. (Somehow the contemporary Bic Conté set, which is encased in resin instead of wood and comes in a range of 24, doesn’t evoke “artist quality.”) I’m pleased as punch to have snapped up these gems! 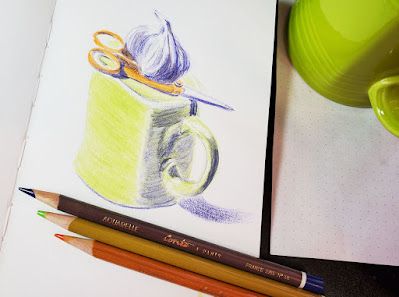