The Viarco ArtGraf has been my favorite water-soluble graphite pencil ever since I first picked one up. It has a beautiful, dark wash, especially in 6B. Although I had tried the carbon version when I was in Portugal a few years ago, its scratchiness made it less appealing than graphite. When a pencil acquaintance in Portugal generously sent me several recently, I decided it was time to give the Viarco ArtGraf water-soluble soft carbon pencil another try.


Compared to graphite, carbon feels rougher, but the Viarco is also softer than some other carbon pencils I’ve tried. As such, it can be delicate to sharpen. Instead of a hand-crank, I use a handheld M+R brass sharpener, which does the job beautifully. Look at that thick core! 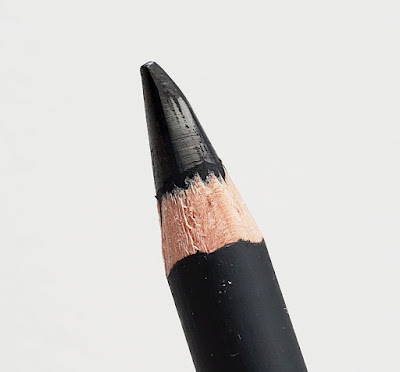 I made test swatches of the Viarco carbon next to the Viarco 6B water-soluble graphite and an Ivory Black Caran d’Ache Museum Aquarelle. For each swatch, I made one pass, heavily applied. I smudged each swatch with a finger (seen toward the top of the swatches). Then I gave each a swipe with a waterbrush (no scrubbing). After the washed areas were completely dry, I gave each a swipe with a clean waterbrush to see whether the previously water-activated material would be reactivated with additional water (shown toward the bottom of the swatches).
The water-soluble carbon is the blackest of the three even when dry and clearly results in the darkest, richest wash. Carbon also doesn’t have the reflective sheen of graphite, which makes it appear darker that way, too. The downside is that dry carbon smudges even more than soft graphite does. The washed areas, however, are smudge-proof once dry.
As for water-activation, dried washes of all three pencils show only traces of reactivation when more water was applied. I think all three would be safe to use with watercolor or other water-soluble materials after drying completely. The risk, though, is that if you have even one tiny particle that was inadvertently left unactivated initially, it may result in an undesirable spot of blackness.

My first test sketch with the Viarco carbon was my hand, which was also my first use of a waterbrush using my non-dominant right hand. Since wielding a brush requires more dexterity and control than a pencil, I was a bit tentative in my strokes and was startled by the solid blackness of the activated marks! It’s as dark and opaque as sumi ink! Yowza, this pencil is not for the faint of heart, but it emboldened me quickly.

Of course, for me, the most important test of any medium is taking it out in the field. After an errand in Northgate, I drove around looking for pink blossoms to sketch, but all I found was a white-blossomed apple tree (or perhaps a white plum, as suggested by an arboreally knowledgeable friend; sketch at top of page). Since the hand sketch had taught me that a little goes a long way with this pencil, I put in the shaded areas of the apple tree less aggressively than I might have with other media (such as a Museum Aquarelle). I used heavier elbow grease on the dark foliage behind the apple. Then I used my spritzer to activate all foliage. It would have been alarming to see the carbon explode with rich blackness if I didn’t love it so much!

My only caveat with Viarco pencils is that the company seems to have some issues with consistency. I’ve had several ArtGraf graphite pencils, and one had a core that was so badly shattered inside the wood that I had to toss it. Others have been fine. The photo of this carbon pencil’s backend shows that its core is slightly off-center, and another I received is further off-center. So far, it hasn’t been a problem when sharpening or using, but it’s something to consider, especially given the softness of the material.

Even so, Viarco’s pencils are the best I’ve used for the quality I adore in water-soluble products: A strong, rich wash, even with a light application. Whoa, baby – this pencil is hot!

Incidentally, I thought of instructor Kathleen Moore (of the graphite tree-drawing class I finished last month) at least twice as I made the apple tree sketch. A reminder that all of us in her class heard over and over was that our darkest values needed to be darker; we all suffered from some wimpiness in that regard. With this carbon pencil, wimpiness is not possible!

The second lesson that I heard in my head was equally important: The darker trees behind the apple were not of interest to me, so my first inclination was to make them vague, gray scribbles. But then I remembered Kathleen’s advice that the best way to bring a light-colored object forward is to emphasize the darkness around it and even exaggerate it. With the carbon pencil, it didn’t take long to lay in a heavy, dark scribble instead of a vague, gray one. And of course, Kathleen was right.