After my enthusiasm for caricature fizzled (at least with humans), I was still thinking about how I wanted to continue working on portraiture for the remainder of InkTober when France Van Stone saved the day again. She sent another free recorded demo to promote her new Draw Along with France course on drawing critters. It was to feature more of the quick-and-dirty crosshatching techniques she had taught in the previous course except the photographed models would all be animals instead of humans.

My Day 22 InkTober sketch is of Bleu, the French bulldog belonging to one of France’s students. That adorable face was just the fun reprieve I needed. Drawing animals is so relaxing and unpressured compared to humans! Our brains are so keenly wired to learn to recognize human faces that it’s almost impossible not to fixate on resemblance. A drawing of a dog, on the other hand, will be forgiven much more readily. (And a dog will never complain if I make it look fatter or older.)

I was tempted to finish off InkTober with animal portraits, but I knew that human faces would always be the greater challenge. With fresh resolve to keep going for the rest of the month, I pushed on with human portraits.

Days 23 and 24 felt like wins, not so much for resemblance as for crosshatching young skin without the Wolfman look. 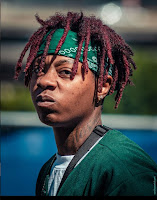 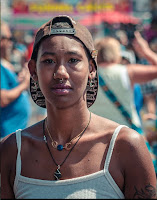 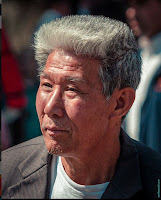 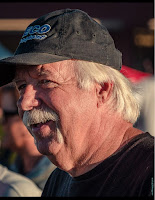 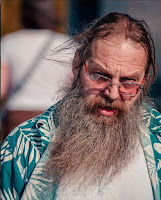 On Day 28, I masochistically chose a reference photo with flat lighting, young skin and exposed teeth. I won’t catalog all the ways in which this one went wrong, but I didn’t make that mistake on Day 29: I chose a much easier photo with strong, dramatic lighting and older skin. I did a little better on the exposed teeth. I’ve always believed that profiles are easier to draw than full-frontal portraits because only half the face needs to be drawn. But the curve of the forehead, angle of the nose and even angle of the chin are all challenging (and affect resemblance as much as other features). 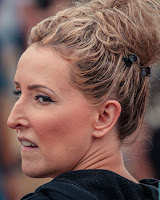 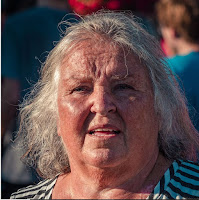 For Day 30, I chose the same reference photo I used back on Oct. 13. Using two shades of gray Uni Pin fineliners then, I struggled with the tilted, rotated head, and it was no easier the second time. 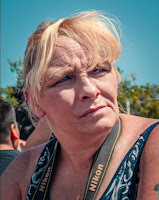 Day 31: After abusing the faces of strangers all month, it was appropriate for me to finish InkTober by giving the same treatment to the face I know best. I say it’s the face I know best, but do we ever know our own face until we attempt to draw it? I’ve made plenty of self-portraits in the past 11 years (including a hundred I made during my first few months of sketching), and each has been humbling. (Self-portraits are not for the vain.) However, a month of portraiture did teach me two things: to avoid unflattering lines, the face should be softly lighted from one side; the teeth should not be exposed.

On a whim, I tried a new material strategy with the selfie: I used a 1mm point Bic for most of the drawing, and at the end, I used a 1.6mm Bic for the darkest values. (It’s the ballpoint equivalent of starting with an HB pencil and finishing with a 4B.) The finer point is a bit less harsh and hairy for facial crosshatching (avoiding the Wolfman look on my own self-portrait is mandatory). In addition, I can avoid using the blobby, drooly broad point until the end. I wish I’d thought of it earlier in the game – it’s a winning combo.

General InkTober learnings and observations: One thing I’ve observed during France’s demos is that she spends very little time blocking or measuring, which enables her to spend most of her time on rendering values by crosshatching. I spend more of my allotted time measuring and remeasuring proportions because I don’t have enough practice with portraits to be confident about eyeballing them. I’d like to be faster and more confident with the measuring part so that I can get the darker values darker and still spend the same length of time on the sketch overall.

This year was by far my most challenging InkTober. It was also my most satisfying because I pushed myself the farthest out of my comfort zone in material, technique and certainly subject. Despite this, I found myself looking forward to each day’s drawing. I like the ritual nature of doing something similar but different every day – for a clearly defined, limited time. (The ritual nature is the aspect of my 407 daily hands that appealed to me – except that I didn’t know when they would end. That part I didn’t like.)

The easiest aspect was that my chosen subject meant that I could simply grab an image every day from Earthsworld’s rich and varied bank of reference portraits. If you ever need reference photos for portrait study, I highly recommend his work. (Except as noted, all reference photos in this post are by Earthsworld.)