Before and After: Still Eyeballing It

I’m still eyeballing proportions when I sketch portraits, and I may never go back to measuring. Eyeballing is more challenging, but I think I’m learning more by forcing myself not to rely on measurements (which aren’t always surefire anyway). To test how well I’m doing in terms of resemblance, I chose four reference photos that I had drawn from previously with measurements and drew each a second time, this time without measuring. All of the first attempts were made when I was just beginning to practice crosshatching of portraits. (All reference photos by Earthsworld except as noted.)

The set below is satisfying because it shows the biggest improvement. In my first attempt, my result looked nothing like the poor guy – not even a distant relative. In that case, I was trying to exaggerate features, but got bogged down by “realism.” I started to measure, then decided not to measure because I was trying to exaggerate, but I recall an ambivalent, confused, messy process, and it shows in the result. In the second attempt, I got both a better resemblance and a better tonal range from crosshatching. 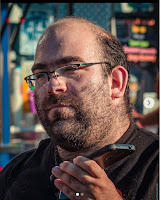 The set below is interesting because I chose a radically different approach on my second attempt – using only white on black paper. Despite the minimal effect, I think I got a slightly better resemblance, and proportions are more accurate. 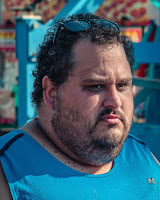 The face of the turbaned man was one of my favorite human reference photos from France Van Stone’s crosshatching courses. Unfortunately, I felt that I hadn’t captured him well, despite the squarely positioned face, which should have made it easier. In my second attempt, I used graphite without measuring. Looking at them side by side, I realize that my first attempt in blobby ballpoint wasn’t so bad after all; in fact, I think it’s a stronger resemblance. Huh.

When I crosshatched this young man in dreads the first time, I was disappointed by the distortions, despite my careful measurements. The slight turn in his face was difficult for me. In addition, I was bummed that my beginning crosshatching skills didn’t capture the beautiful highlights on his skin. In my second attempt, I’m much happier with the overall approach of using white and black on red paper, but I still didn’t capture his resemblance. Despite that, I think it’s a better portrait because it’s not distorted. If I weren’t looking at the photo reference alongside it, I’d be mostly happy with it.


This last exercise is different from the others in that I had not drawn from this reference photo previously. This is probably one of my most accurate in terms of resemblance without measuring. Again, I really love this approach of white and black on red, which is such an easy, straightforward way to capture shadows and highlights (which I’ve been using ever since I learned the trick years ago with red Field Notes Sweet Tooth books).

Although I’m continuing to study portraiture, I want to move away from focusing too much on resemblance and work more on form and color. To that end, I probably won’t show the reference photos as often. It’s hard not to think about resemblance, but I think better resemblance will come over time as I continue honing my eyeballing skills. Even if I get more accurate results by measuring, I’m going to avoid it just to keep pushing myself to observe more closely.
Posted by MiataGrrl at 7:00 AM