Last holiday season, Caran d’Ache released a new set of Prismalo bicolors as part of its Wonder Forest holiday theme. It had been two years since the first bicolors set was released around the same time of year (though without a holiday theme). I wondered then if I would have to wait another two years to see the next edition. To my delight, I had to wait only one year!

COLOUR TREASURE: a rainbow of colours that brings out the inner child that lies in each and every one of us. Caran d’Ache makes the festive period truly magical with this sparkling and high-energy collection that delights all fans of colour. Twelve two-tone Prismalo water-soluble pencils, including 3 original combinations, offer 24 enchanting colours recalling childhood emotions that are constantly renewed.

A fan of color? Twenty-four enchanting ones that recall childhood emotions? Add to cart! (Actually, hold on, and I’ll tell you where it costs less.)


The latest bicolors set comes in a shiny gold tin with the same design as the red Wonder Forest tin and the original silver tin. Like the Wonder Forest set, Colour Treasure comes with a watercolor paint brush. The original set came with a waterbrush. To recap, all three sets are shown below (a good excuse for eye candy).
Although the description says that the Colour Treasure set includes “3 original combinations,” the actual number of new colors is confusing. Compared to the previous two bicolor sets, I found four colors that have not been included before, but each is paired with a color that has been included in one of the other sets. To add to the confusion, the Colour Treasure set includes a metallic silver and gold pairing, which also appears in the Wonder Forest set – except in the Colour Treasure set, the metallic gold color is called Dark Gold (899), which looks identical to the previous Gold (499). Is Dark Gold new? I see no discernible difference. And if it’s the same as Gold, why change the number? 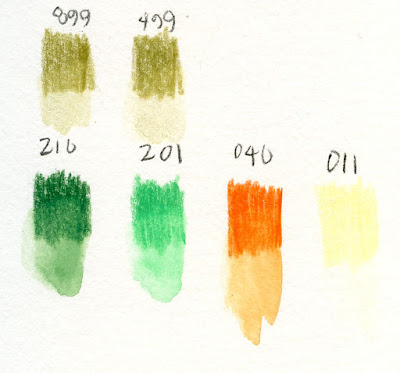 To complicate matters further, none of the bicolors in any set has Prismalo color names or numbers printed on them. If you care about which colors are included, you have to download the color charts (usually provided by online vendors). Whew! I had to take a nap after all this, but as far as I can tell, these are the four colors in the Colour Treasure set that have not appeared previously (I’m not counting Dark Gold):

If I had to give an objective evaluation of the three bicolors sets, I’d have to say that Wonder Forest is probably the best bang for the buck – the widest range of colors and with unique holiday-ish pairings like red/green and silver/gold. The original set also contains a solid range, but includes only 10 pencils instead of 12. Colour Treasure duplicates eight pairings from other sets, and the new colors are too similar to others to add much value. In particular, Pale Yellow (011) is too pale to do much with.

But I quibble. Who am I to complain about any set of bicolor watercolor pencils by Caran d’Ache? I have no shame in saying that I love them all!

As I’ve said before (see my post about the original set for a full review of the pencils’ performance), while Prismalo quality is nowhere near that of Museum Aquarelle or Supracolor, it has a legitimate place in Caran d’Ache’s product line (not to mention history). Harder and thinner than Supracolor, Prismalo sharpens to a beautiful, firm point that’s handy for details, yet it’s soft enough to cover small areas quickly.

When I started making occasional sketches of sky activity early this year, I put together a compact kit of bicolors for those spontaneous thumbnails, sometimes made in the wee hours. I’ve been using the handy kit for skyscapitos ever since (at left). Prismalos are too hard to make me happy on location when I want to spread color quickly, but they are fine for making 2-by-3-inch sketches.

By our (my) picky standards now, Prismalo may seem so-so. Historically speaking, however, Prismalo quality must have dazzled colored pencil users back in the ‘30s when Caran d’Ache introduced them – the first watercolor pencil in the world. I recently learned that the artist Alberto Giacometti had used Prismalo for lithograph preparatory drawings in the ‘50s. I’ve tried quite a few vintage colored pencils, both traditional and watercolor, from that era, and none I know of can compare with Prismalo’s pigment quality (even my oldest set, which has less pigment than contemporary Prismalos).

All of this is just my geeky, long-winded way of saying I’m thrilled that Caran d’Ache has come out with a third bicolor set just in time for holiday gift-giving. (I’m still thanking myself for this early gift, which I even had the joy of opening! See below.)

Speaking of which, if you’re interested in such a gift (for yourself or others), as usual, the Colour Treasure set is not easy to find. Although a few US shops – Pen Chalet, Atlas Stationers, Gold Spot and Gentleman Stationer so far – are carrying the collection’s pens, postcards or graphite pencils, the only online sources I’ve found for the bicolors set are in Europe. The least expensive is Penworld in Belgium, where I got mine (with very reasonable shipping, too). Surprisingly, Penworld’s price is lower than that of either of the previous bicolor sets. In fact, Penworld’s prices for the whole Colour Treasure collection are lower than other sources. (I may have purchased another part of the collection. . . stay tuned.)