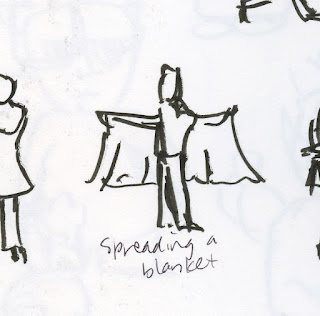 I’m still digesting all that I learned and experienced in Taylor Dow’s excellent, mind-expanding workshop. I’ll probably continue to have insights, but here are some I’ve been thinking about since last weekend:

As Taylor talked about the process of cartoon character development, I realized that I had gone through exactly that process to create Weather Bunny – but I didn’t know that’s what I was doing. In fact, I had no intention of creating a cartoon character when I started – she was just an Inktober sketch at the time. I started by drawing from a photo of a real rabbit that I had found on the Internet. While drawing her repeatedly, I continued simplifying and refining, and eventually she turned into the character she is today. It was satisfying to realize that I had used an organic and traditional cartooning process without even being aware of it. 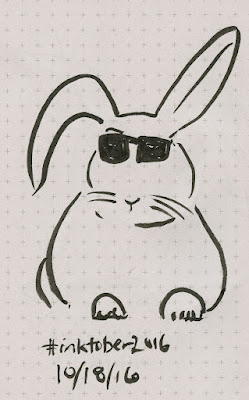 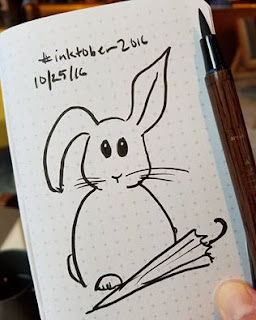 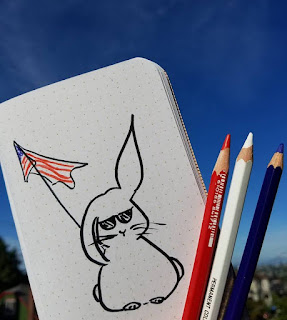 Although I had fun entertaining myself by writing dialog between inanimate objects I was drawing, recording my own authentic observations and memories was more satisfying. While most of my exposure to comics has been of the humorous kind (newspaper “funnies” or those in the New Yorker), comics do not need to be humorous. I’m not even sure I want to make comics, but it became clear to me that whatever results from my cartooning work is better if it’s authentic and not necessarily intended for the amusement of others (or even myself).


Another thing I have been doing on my own without realizing all of its benefits is regularly using a black, thick-line brush marker for most of my small, quick sketches. It is my choice mainly for expeditious reasons: I can finish a sketch quickly when I focus only on a line drawing that does result in a flat, cartoony look. In class, it was a definite benefit to have this experience. Classmates who were used to sketching with pencil had more difficulty adjusting to a Sharpie’s aggressive, unforgiving line.

After I posted my 10-year retrospective sketches, a follower commented that she enjoyed seeing my writing integrated with the first-year sketch by wrapping it diagonally across it. I like the look of that too, and I started thinking about why I stopped doing that. The answer is probably this blog. I have always done the kind of reflection and observation that I practiced in the workshop last weekend, but I keep the writing separate by putting it here on the blog. The Day 2 observational pages I made during the workshop made me want to start reincorporating writing with my sketches again.


I now give myself more credit than I had been for some ability to draw from memory. At the top of this post is a tiny sketch I made during one of the Day 1 workshop exercises: a man spreading a blanket onto the grass. I know this motion took only a second or two – much less time than it took me to see the action and then capture it on the page. I obviously did sketch this from memory, yet most of the time I’m not aware of how much my visual memory is assisting. I became much more aware of it when I heard my classmates talk about the difficulties of sketching people who are moving around and doing things. I knew that they all had varying degrees of experience with drawing, some with lengthy experience, yet none seemed to have as much experience as I do drawing from life. Drawing from life helps. A lot. For every kind of drawing but maybe especially for drawing from memory.

My car drawn from memory isn’t too bad, either. But the memory has been built over 10 years of drawing many cars from life.

My biggest insight is perhaps refuting the concern I had stated in my Part 1 post: “I’ve wondered if my strong reliance on the fundamental principles of drawing from life – observing closely, measuring, checking spatial relationships and proportions – has made it harder for me to draw from my mind.” No – the skill of using those fundamental principles is necessary for drawing realistically from my mind and also makes it easier, not harder (based on the experiences of my classmates). It just took a workshop in cartooning to appreciate that skill.

Finally, I’ll end this post not with an insight but with a practical matter that was critical last weekend: I finally found a reliable N95 mask that is both comfortable and doesn’t fog my glasses. Although I knew we would spend only a couple of hours inside the classroom and the rest of the time outdoors, I had to have a safe mask that would enable me to draw, which is difficult and annoying when one’s glasses are constantly fogging!