Exhausted but exhilarated, I got home from Day 1 of Taylor Dow’s workshop with my head blown open from all the drawing experiences that were new to me. By the next morning, I also had my first insight: Although the most creative and entertaining part of the day’s exercises was making up dialog between inanimate objects, ultimately I felt like I was just telling jokes to myself. Reading the sketchbook pages felt unsatisfying, and it wasn’t a sustainable practice.

Day 2 began with a brief lecture and demo about how cartoon characters are developed. Taylor also teaches a workshop on cartoon character development, and most of my classmates were interested in this aspect of cartooning. Although I’m less interested, it was nonetheless fascinating to see examples of how familiar characters can be broken down into simple parts often made of geometric shapes – eyes, mouths, noses, hair – that had been honed over time by their artists into the characters we now recognize easily. These elements do not need to be invented or reinvented. We can “collect” images we like from characters we see, copy them as a way of study, and reassemble them in unique ways. After doing this over and over again, refining as we go, the uniqueness becomes our own.

To demonstrate this principle, we viewed images of well-known families of characters – the Simpsons, for example, or Loony Tunes – and then drew only the eyes, only the mouths, etc. We all found this exercise fun as well as illuminating. I had never noticed that almost all Simpsons characters have tiny dots for pupils!


It was time to go back to Volunteer Park for observational work. (This was harder on Day 2 because the weather became much cooler, grayer and a bit drizzly.) Taylor told us that the focus of the day’s exercises would shift to being autobiographical. Instead of speculating or imagining, we were instructed to draw whatever we saw while making personal reflections, observations and connections. We were still encouraged to incorporate sensory perceptions like smells and sounds, overheard conversations, memories prompted by what we drew and whatever was part of the actual experience of the day.

Once again, my biggest struggle was avoiding going into autopilot urban sketching mode. I kept my sketches small so that I would not be tempted to draw too much context or detail. Capturing elemental images of both people and objects, I followed Taylor’s instructions and paid attention to my perceptions, feelings, thoughts and memories prompted by the drawings. 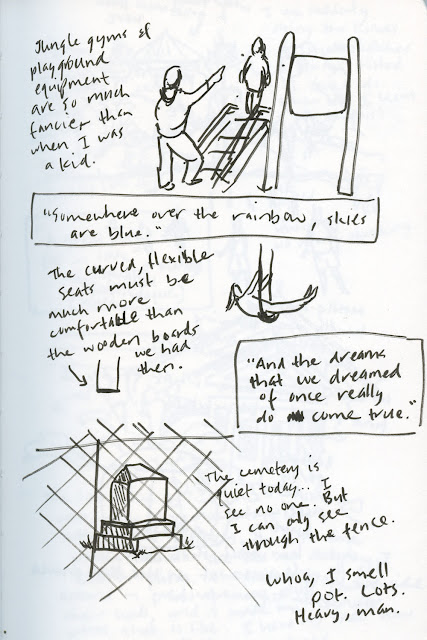 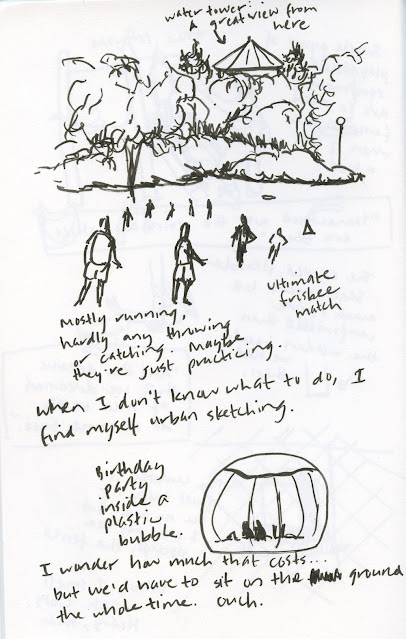 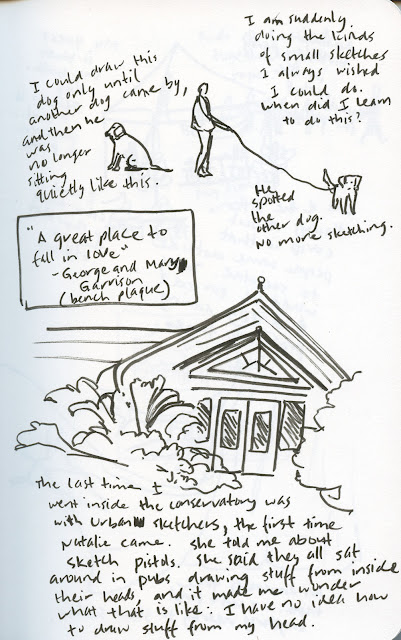 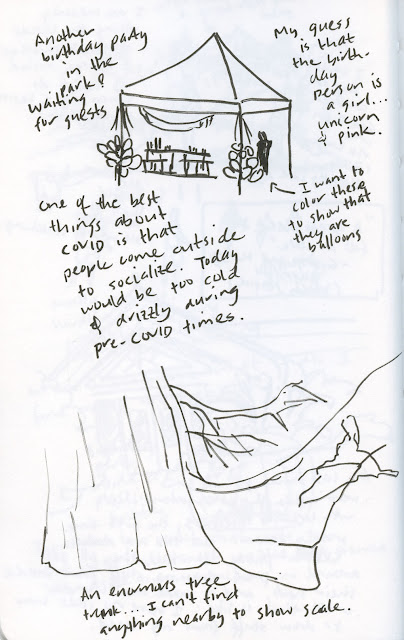 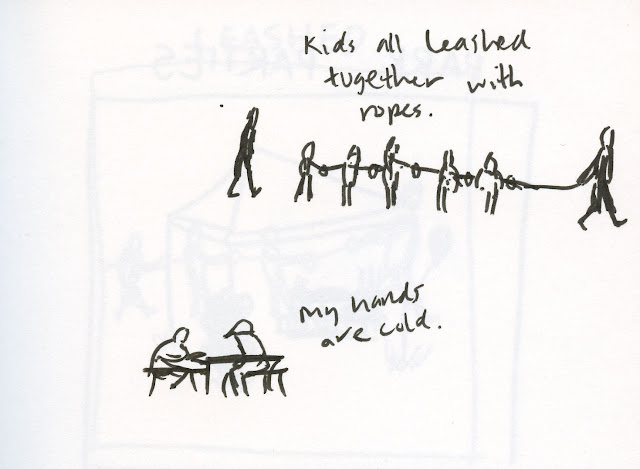 Once I dialed past the “urban sketching” setting, the writing came easily and quickly to me (writing usually does), and the exercise led to some insights related to my own drawing practice and process. For example, I suddenly realized that I was making exactly the kind of small, simple sketches that I had always wanted to do before I started learning to draw. I have been doing this for a long time, of course, but never noticed consciously that it is what I used to wish I could do. Another example is that when I was drawing some balloons, I really wanted to color them to help show that they were balloons – and I had to nearly physically restrain myself not to pull out a few colored pencils!

The biggest insight I had from the day was that these sketches with “autobiographical” observations were not necessarily humorous or entertaining like dialog between trees and fire plugs, but they felt authentic and honest. The writing was not much different from what I am used to doing in my journal, but these reflections, thoughts and memories came directly from the act of drawing. This is not a new concept – the whole “art journal” movement is based on this concept – and yet I had not really made that connection with sketches that are otherwise similar to my usual sketches made on location. And it turns out that this was, in fact, the purpose of the exercise: Drawing as an autobiographical act is one way to find one’s authentic voice which can then be expressed as a comic.

Back in the classroom, we finished the exercise by choosing a few favorite drawings and turning them into more finished comics. Taylor suggested making a four-panel grid of squares and simplifying and redrawing the favorite images, one per square, and possibly repeating. The primary benefit of this repetitive drawing exercise is that each time it is redrawn, an image is further simplified to its essential elements. Below is my first grid. 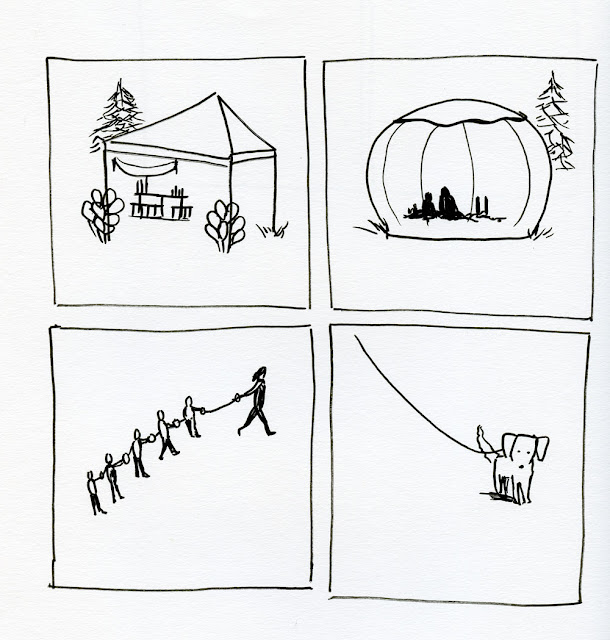 The urban sketcher in me added trees to the background of the birthday party tent and the “bubble” tent to show context that would indicate that they were in a park. Looking at the grid, however, I felt I had made the images more cluttered rather than more refined. I also did not see a connection among the four images, and the lack of “story” bothered me (you can take urban sketching away from the girl, but you can’t take urban sketching out of the girl… or something like that).

What I saw then were pairs of images. Instead of using a grid of four panels, I redrew the images into vertical pairs. Taylor suggested that a few words could also help tell the story. Below are my final results. 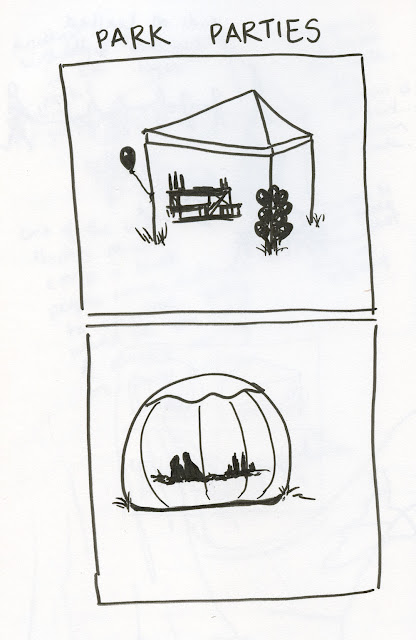 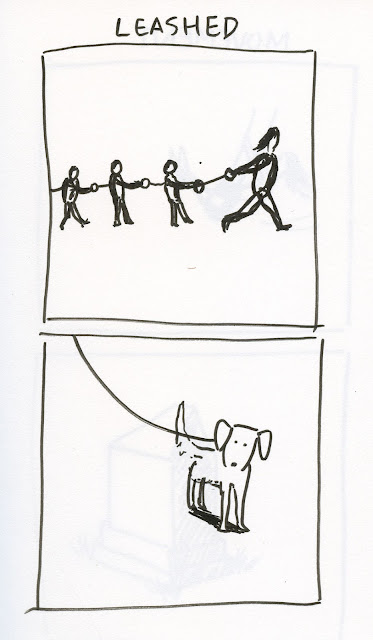 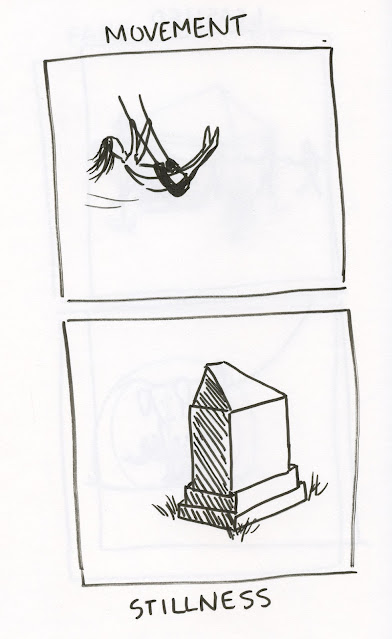 Not coloring the balloons still bothered me, so I asked Taylor for help. He drew a classic cartoon balloon, which always has a reflection shaped like a window (we laughed when we both said this at the same moment). He pointed out that as long as one thing reads as “balloon,” the viewer will get it and apply that to all the rest of the balloons. I played with this on my sketch until I came up with the idea of putting a single balloon on the left, which I thought would read better as a balloon compared to the cluster of balloons on the right.

By the way, if you’re wondering what the second party was – the thing that is shaped like a transparent pumpkin with people inside – I took the photo below to show you (I was so busy drawing that it was the only photo I took the whole weekend). Almost everyone in class drew it because it was so wonderful to see: A catered birthday celebration picnic including the tent! I learned about this type of all-weather picnic service from Gabi Campanario’s Seattle Sketcher column several months ago.

The third and last part in this series will include more insights from the workshop.