In recent years I have been wanting to expand my drawing skills beyond observational practices by pushing myself to use my memory and imagination – drawing from my mind instead of through my eyes. And when I say “draw from my mind,” I’m not talking about fantastical images of creatures or machines that some artists are able to create; I’m just talking about being able to picture a chair and then draw it realistically as if I were looking at it. I know I readily and easily drew imaginatively when I was a child, and yet like many adults, I lost that ability at some point.

Of course, learning foundational drawing skills is essential to being able to draw realistically from the mind. However, many times as I’ve struggled to draw from memory or imagination, I’ve wondered if my strong reliance on the fundamental principles of drawing from life – observing closely, measuring, checking spatial relationships and proportions – has made it harder for me to draw from my mind. I can look at something very closely and think that I understand it, but as soon as I look away, poof – it’s gone.

Studying Lynda Barry’s books was one step in this direction, but I found it so challenging to pull things straight out of my brain that I felt like some steps were missing. Barry’s cartooning principles rely heavily on mining personal childhood memories that might be productive for some, but it wasn’t for me. I also did not necessarily find it satisfying to create a fictional character as a voice for expression. It felt artificial and forced instead of organic and authentic.

When I read a description of a Gage workshop called “Observational Cartooning,” I thought it might put me on a more accessible path toward the type of skills I want to develop. I get the “observational” part – how does it lead to “cartooning”? Two days with instructor Taylor Dow would give me an answer.

Day 1 of the weekend workshop was a mix of the familiar and being pushed completely out of my comfort zone. Materials were simpler than in any art class I’ve taken: A sketchbook and a black pen with a heavy tip, like a Sharpie. I used my favorite Uni Pin brush pen. Taylor recommends this type of drawing tool because it immediately makes a thick, bold, “cartoony” line that does not allow for “sketchy, scratchy” lines and constant erasing and correcting. We were not allowed to “render” (give shading to objects to evoke a three-dimensional form) during the workshop, and we were encouraged not to think about perspective, proportion and other basic principles of realism to make “good” drawings.

After a brief slideshow introduction to Taylor’s work and how he had developed observational cartooning, we launched into a challenging but fun – and funny – exercise: Draw a car from memory. (Lynda Barry discusses the same exercise in her books, so it was familiar to me, but I had never done it myself.) Starting at four minutes, we were instructed to draw a car, and with each successive sketch, the time limit gets shorter and shorter all the way down to one second. The idea behind this exercise is that as each time period gets shorter, we are forced to reduce the concept of “car” to its most fundamental and basic – which is the root of a cartoon drawing. My classmates and I all chuckled during this exercise as our cars became more abstract and sometimes absurd. Sharing our work afterwards was both entertaining and illuminating to see how many different ways people imagine “car.” Although it was difficult, my experience sketching many, many cars from life was certainly helpful. (First two drawings in the exercise shown above; the rest below.)

The next exercise was far more challenging for me. We all took turns naming a cartoon character, and we were given 30 seconds to draw it. Of course, most were familiar to me – Bullwinkle, Lisa Simpson, Tweety Bird – and yet I could not imagine them clearly enough to draw them in 30 seconds (though more time would not necessarily have been helpful). I was not familiar with some contemporary characters at all, and in those cases, Taylor instructed us to make something up. Shown below is one sketchbook page; we did many more examples of these.


The rest of the day we left the Gage classroom and walked to nearby Volunteer Park for the “observational” practice. Ah – now this would be comfortable to me, I thought! I know how to do this part! The first exercise was to draw only people for an hour – as many people as possible. We were to draw simply and quickly without worrying about proportions. The catch (for me) was that we were to play with characterization by exaggerating or changing features or actions and to use words to describe, speculate or otherwise observe what we are drawing. Taylor also suggested incorporating conversations we overheard or smells and sounds as part of our observations. Fortunately for us, the beautiful, sunny day had brought out many people, so we had subjects in every direction. 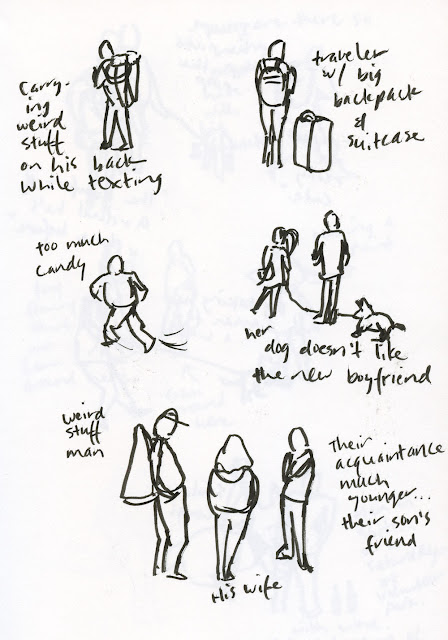 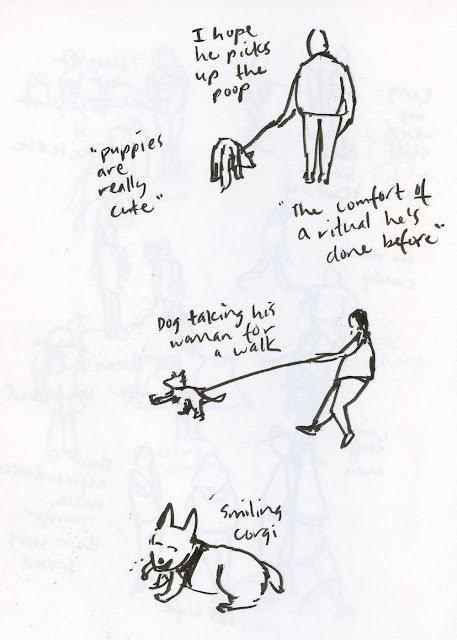 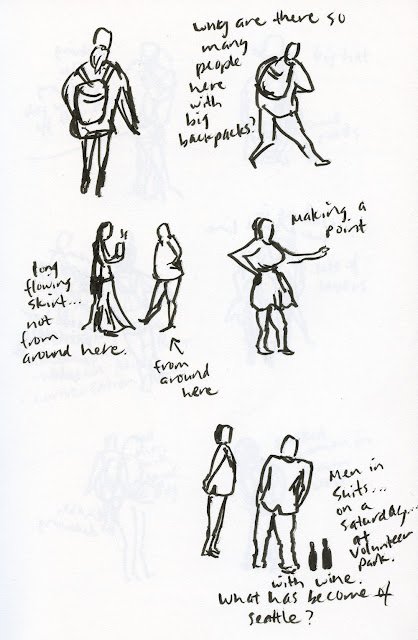 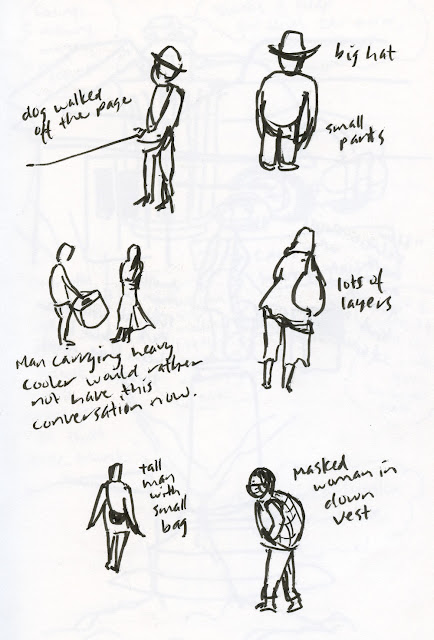 My classmates, who all had less experience with sketching on location, had the most difficulty with simply drawing people who move and change. (I got that part down.) My big challenge was “playing” with what I saw – I could only draw what I saw, and exaggeration or changing features was difficult. I had a much easier time using words to speculate on their actions or relationships, and this is when the exercise became fun for me. (A few sketchbook pages are shown above; I did more like those.)

The next exercise was even more challenging: Instead of people, we were to draw only inanimate objects with the same emphasis: Play with scale and relationships, exaggerate features, and use words to describe or observe. Again in an hour, we were to draw as many objects this way as possible.

My immediate response was to start urban sketching – find a building or tree or fire plug and draw it in context – and I knew that if I did that, I would easily fill the hour with only one or two typical urban sketches without fulfilling the assignment. I had to slap my left hand to keep myself from falling into this well-honed habit! 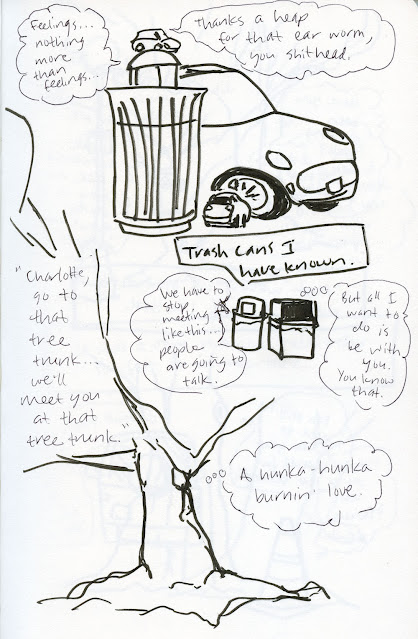 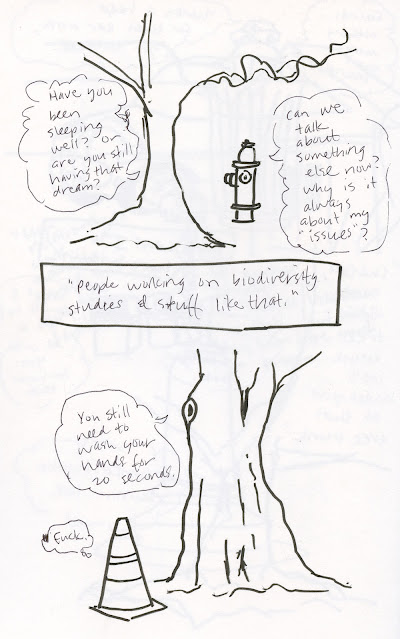 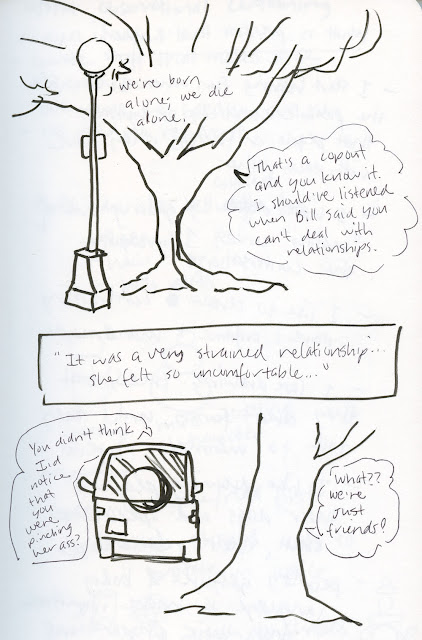 Playing with some ideas, I found that if I paired a tree with some other object and imagined their conversations, I could most easily force myself out of simply drawing what I see and focus on relationships, scale and thoughts. Although these sketches may look like my typical urban sketches, the objects were not necessarily together in reality. For example, the traffic cone was not right next to the tree. (OMG, I’m not being truthful to what I see!) When I overheard something interesting, I used quotation marks to distinguish those words from my own thoughts. Once I got into this, the exercise became enormously entertaining.

Afterwards when we shared our work and discussed our processes for the day, my classmates and I all agreed that the exercise with people was much easier than with inanimate objects. Although the others seemed to have more experience drawing imaginatively and knew more about comics and cartooning than I do (I haven’t read or studied many comics), they all seemed to struggle more with drawing from life. I was pleased to realize that my decade of location-sketching practice and even studio life drawing served me well in these exercises because I could focus on the more imaginative parts while the drawing part came relatively easily.

I went home mentally exhausted! Day 2 was even more draining – but also illuminating and ultimately insightful.