Much to everyone’s relief, the smoke began to dissipate Sunday morning just in time for Urban Sketchers Seattle’s outing at Green Lake. It had been six years since the group last met there. Since I walk there regularly and sketch in the neighborhood often, it’s fun and even inspiring when familiar sights are made fresh again by seeing them through the sketches of others.

On this day I was in the mood for “classic” Green Lake: What types of scenes quintessentially represent what Green Lake looks like and, in fact, means to me? It’s not a huge lake – I can walk around it in three-quarters of an hour – so details on the opposite shore are fairly easy to see. Trees grow all the way around, and in many areas nearby houses built on the surrounding hills are visible beyond the trees. Anyone familiar with Green Lake would probably recognize these types of scenes.

I began with a rear view of the historic Green Lake Bathhouse (now called Seattle Public Theater) from the opposite shore (at left). Nearly a hundred years old, the Green Lake Bathhouse was originally used by swimmers to change into their suits and eventually became a community theater.

I have never sketched the Bathhouse building from the front – only from across the lake. In fact, the only other time I sketched it was last summer from a nearby spot. I really fought with myself as I sketched it this time: Compositionally, I knew that anything on the distant shore should be indistinct and less intensely colored than the foreground or middle ground. But my eye was also more interested in the warm-hued building surrounded by cooler trees, some of which were just beginning to show warmer fall colors. Which of my battling selves won?


Another favorite part of the lake is one of the narrow “bays” where the opposite shore is actually very close (top of post). A guy sitting on the near shore gave me an ideal foreground element – until he got up to leave less than a minute in (he was staring at his phone; surely he should have stayed longer!). Luckily for me, I scribbled enough to scale him properly. The only other challenge was the constantly shifting light as the sun dodged in and out of clouds all morning. Residual smoke still hanging near the horizon gave the whole park a warmer-than-usual light.

Back at Green Lake Village for the throwdown, I killed the remaining minutes with a quick sketch of a young bicyclist and her mom. We had an awesome turnout of sketchers at “my” lake! 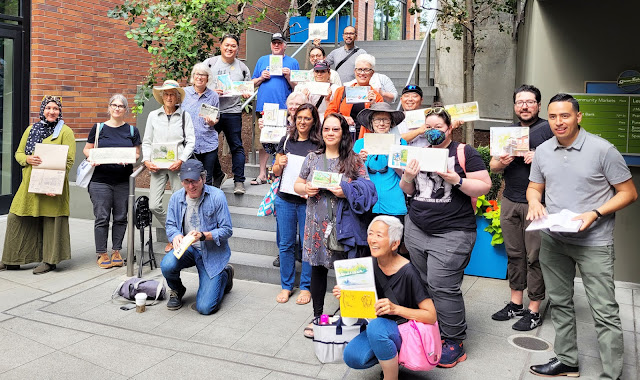