Other than a brief fascination with Princess Di back in the early ‘80s, I’ve never been too interested in the British Royal Family. I learned the most I have ever known about Queen Elizabeth II and her reign from the TV series The Crown. (I realize that a TV show is not necessarily the most accurate source of biographical and historical information, but this admission on my part says a lot about me; at least my source wasn’t tabloids picked up next to the grocery store checkout.)

Before seeing the series, she seemed more iconic than human to me; more figurehead than flesh and blood. Whether fictitious or factual, The Crown did drive home the enormous, lifelong pressure Elizabeth bore until she could finally rest on Sept. 8, 2022.

I thought about how Queen Elizabeth II is likely the most recognized monarch of any country in the world. With her being the longest reigning of any British monarch (and the second-longest recorded of any monarch of a sovereign country, according to Wikipedia) combined with the proliferation of mass media during her reign, is there anyone who has access to any kind of media who is unfamiliar with her image?

Imagine the immense responsibility and pressure of that fact alone. Many contemporary celebrities crave that kind of worldwide recognition. But remember that Elizabeth never asked for it; yet she lived her entire adult life fulfilling the responsibility that her image represented. 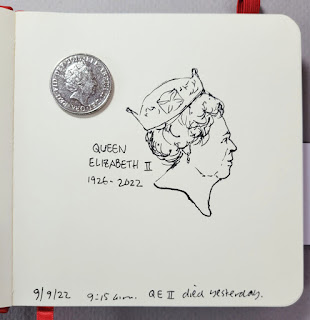 Even before I started Googling for an image to draw from, I was already overwhelmed by potential choices: Which era to choose? Young Elizabeth? More recent Elizabeth? What color hat? A candid newspaper image? Or a crowned formal portrait? But you know me – I always prefer to draw from life. That’s when I remembered that I still had a 10p coin from our 2016 trip to the UK. (OK, so it’s not exactly “from life,” but the coin is real, and I had to use a magnifying loupe to see the details.) Somehow it seemed fitting to use one of the most commonly seen images as the model for my homage.
Posted by MiataGrrl at 7:00 AM