The name Eagle, the earliest maker of Prismacolors, frequently crosses my eBay radar, but I don’t pounce on every set. I have as many vintage Prismacolors as I’ll ever use (OK, quite a few more than that), and the American pencil manufacturer made lots of pencils in its day. This set, however, did make me pounce: Eagle Copycolor pencils with an intriguing irregularity.

These “indelible” colored pencils are water-soluble. (Alas, as expected, the pigment content is low and washes pale. This set is for “show” only and not for use.) The box has a snap closure with a hinged easel back that enables the box to stand upright – a typical colored pencil box design of the era.

Nearly new, the set of 12 included only two pencils that had been barely used. The rest were unsharpened. Of note is that seven of the 12 are finished with lovely red-banded end caps while the rest are unfinished. The Eagle branding and “chemi-sealed” slogan are identical on all 12. Why are end caps missing on nearly half?

The answer is in the small, loose card that was inserted in the package: “Because of Government restrictions in the use of metals and other materials, the pencils in EAGLE ART SETS may not all be uniform in appearance, but their high quality has not been affected in any way.” 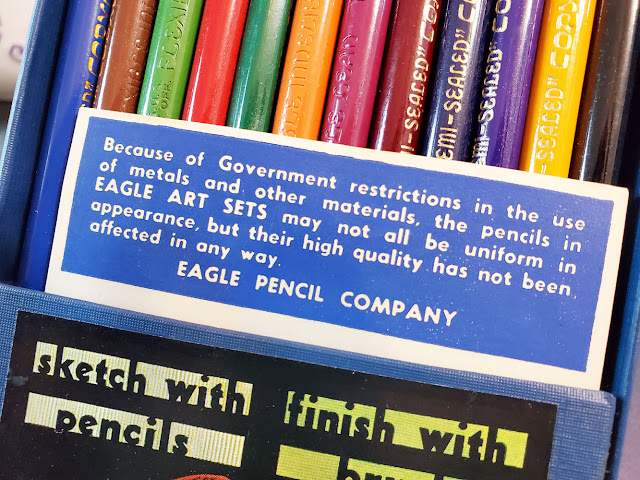 What an interesting bit of history reflected in an old box of pencils! Produced during the second world war, the uncapped pencils indicate Eagle was following requirements in support of the war effort. This box happens to have some pencils made pre-war and some during.

As I admired the precious (both then and now, for different reasons) end caps, I had déjà vu: Where had I seen that gorgeous, tiered wedding cake design before? It was the same as on the Eagle Magicolor set I had acquired about a year ago! That set, too, is water-soluble, and the Eagle logo is the same, which means they are from the same era.

That brings up new questions: Eagle produced two lines of water-soluble colored pencils during the same era; which is older? Or perhaps the Magicolor line, with more pigment, was intended for artists, while the Copycolor set was for students or “map makers” (a popular use of colored pencils back in the day)?

I may never know. But in the meantime, I’ll ogle the beautiful end caps (arguably my favorite design in my entire vintage collection) contained in this little box that exhibits a part of American history.