An amazing vintage item crossed my eBay path recently: a totally unused set of Eagle Magicolor watercolor pencils. (In terms of an exciting find, it was second only to the set of Caran d’Ache Prismalo watercolor pencils, likely from the ‘30s, that I stumbled upon last fall.) My interest in Eagle has focused mainly on vintage Prismacolor and Verithin pencils, and once I acquired some from the various production eras, Eagle fell off my radar. I had never heard of the Magicolor name before, nor did I even know that Eagle made a watercolor pencil – yet there it was in a generic “vintage colored pencil” search. Fortunately, the item had a “buy now” option (auctions give me jitters), which I certainly did!

The box indicates a copyright date of 1936, but I know that’s probably related to the company and not the product. How old might this apparently rare set be? My historical research (which consisted of contacting several helpful and knowledgeable pencil collectors) didn’t yield any conclusive information. Based on the Eagle logo design, however, the consensus is that the set is from between the end of World War II and the early ‘60s.

The cardboard box is similar to the kind I’ve seen Eagle Prismacolors come in with a snap closure and hinge that enables the set to stand upright.

Nine pencils in my set of 24 came unsharpened, and the rest had factory sharpening that showed no signs of use. (Of course, now they have all been sharpened and used by me!) The product line must have been making a transition from factory sharpening to unsharpened, so the set came with some of each. The barrel is round with glossy paint matching the core color in a design similar to Eagle Prismacolors of the same era.

Similar to Prismacolors, that is, except for one standout detail: The gorgeous gold metal end cap with wedding-cake tiers and a red stripe – be still my heart! It must be one of the most beautiful end caps I’ve ever seen!

The Eagle logo and typography are the same as in the Turquoise Prismacolor era. The Magicolor branding, however, has a distinctive look: The partly italicized Magicolor and the name surrounded by “sparks” tickle me no end. 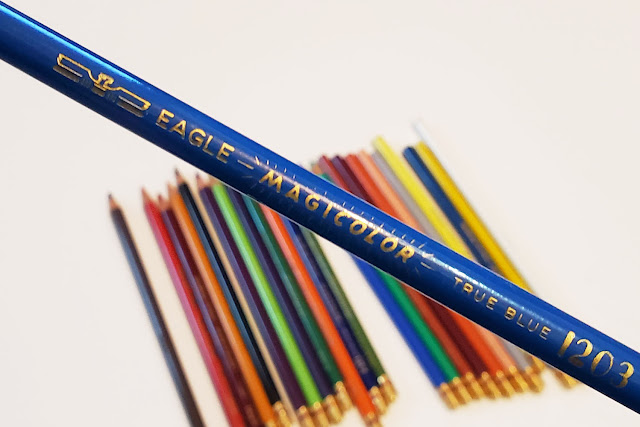 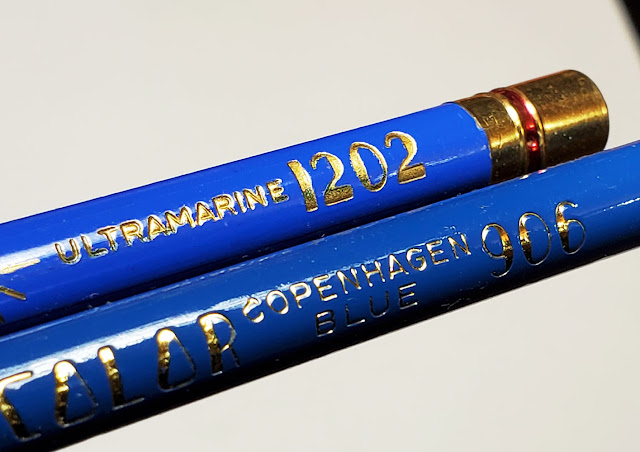 When I compared the Magicolors with Prismacolors more closely, I saw that the color numbers are the same – Magicolors begin with 12- and Prismacolors begin with 9-. They also have the same thick cores as Prismacolors.
With all these similarities with Prismacolors, I had high hopes that the Magicolors would apply with the same creamy softness and high pigment quality. In fact, the cores are harder than Prismacolors. Among my watercolor pencils, Magicolors are most like Faber-Castell Albrecht Durer in softness and application quality, and when used dry, the pigment coverage is good. Unfortunately, the pigment content isn’t as high, so when activated, the hues don’t have a rich wash (it’s most visible in the swatches under my sketch).

This set of Magicolors raises so many questions: If these were made during the same era as the Eagle Turquoise Prismacolors, which are spotted fairly often on eBay, why are they so rare by comparison? (One of my collector contacts was as amazed as I was that this set appeared; he has an identical set but had never seen others before it or until mine.) Twenty-four is a modest set quantity; were there larger ones? Surely a set of 12 probably existed. Since the lower pigment content might not be up to artist quality as the Prismacolors are, perhaps they never caught on and were discontinued after a short run.

However brief Eagle Magicolor was on the art supply shelf decades ago, I am all the more thrilled to have grabbed this set to experience a part of watercolor pencil history. 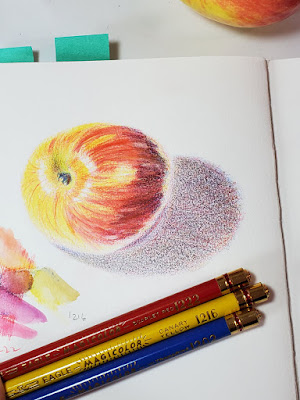