The first year that I observed National Croissant Day, I didn’t find out about it until it was too late to organize anything, so I celebrated by myself at Starbucks. It was not the best croissant, but the people there were fun to sketch.

Last year I was prepared, so Nilda and I celebrated together at Honore Bakery, which makes some of the best croissants I’ve ever had, right in my own neighborhood.

That was all in the Before Times, of course. This year, I was well-prepared and invited more sketchers to join me – sadly, on Zoom. Still, it was a fun afternoon of sketching decadent pastries (not all of which were croissants, but I like to think of myself as tolerant of all religious beliefs).

My ginormous almond croissant came from Honore again. After picking it up that rainy morning, I sketched the bakery’s backside from the parking lot. (The front would have been more attractive, but sketching it would have required standing in the middle of busy Lake City Way.) If I had planned my sketch as well as I had planned the socializing, I would have brought my large Stillman & Birn Nova sketchbook with me to Honore so that I could have sketched the building in it. But I hadn’t thought that far ahead, so the sketch was in my red Field Notes. Conveniently, it has perforated pages, so I tore it out and glued it right in.

Edited: I just learned that St. Honore is the patron saint of pastry chefs! 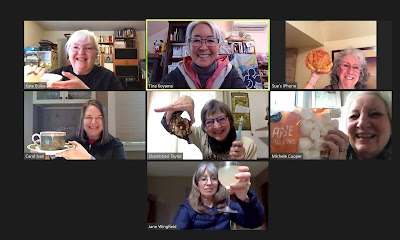