Some Thoughts on Paper


I am often asked for recommendations on the “best” colored or graphite drawing pencils. I usually inquire about how the pencils will be used and try to make recommendations based on the need and budget. But the part of the equation that often gets lost is the type of paper that will be used with the pencils: “Oh, I don’t know – whatever paper I have, I guess.” I believe that the pairing of a pencil with a paper is almost more important than the choice of pencil alone.

Watercolor painters discuss paper to the nth degree, and rightly so – using inappropriate paper with wet media can result in frustration at best or disaster at worst. Sometimes it’s fun to deliberately use inappropriate paper just to see what happens (Roz Stendahl is famous for this), and results can be interesting and surprising. If you are just beginning to learn to use a medium, however, an inappropriate paper does nothing to help you learn and, even worse, it keeps you from understanding whether an undesirable result is because you lack skills or because you are using the wrong materials.

With dry materials like colored or graphite pencils, the importance of the paper/medium relationship is more subtle because pencils are likely to be more forgiving. They can still make satisfactory marks without the paper buckling or falling apart. That’s probably why many people think that any kind of paper can be used. But if a disappointing result occurs, perhaps it’s time to look at the paper and not just the pencil.

At various times, I have thought intensely about paper, most recently a couple of years ago when I was trying to decide which Stillman & Birn sketchbook to use as my daily-carry. I’m happy with my current choices (Beta with watercolor pencils; Zeta with almost everything else), but the paper issue still comes up occasionally.


For example, when I started the new year with a fresh book for my scribble journal, I chose a Leuchtturm 1917 journal. It’s a format I’ve been using for years for my written journal, so it’s familiar and comfortable. I knew that the paper would not be the best with colored pencils, but I also write in the same journal, and I like to write with a variety of pens, including fountain. I decided that the paper would be an acceptable compromise for the small spots of color I would be putting onto it.

The Leuchtturm has worked out well in general, but it has made me more judicious with the colored pencils I use because some are not pleasant on the surface (I enjoy my softer pencils best). Graphite feels and looks downright awful.

More critically, my current class in drawing trees with graphite has made me think about paper again. Instructor Kathleen Moore has pointed out that the two sides of most papers have slightly different surfaces. I have several pads of Bristol drawing papers with vellum and smooth finishes, so it’s been illuminating to try a different paper or a different side of the same type of paper with each assignment. For the branch assignment, I used the “wrong” side of Strathmore 300 Bristol vellum, which Kathleen prefers. During the trunk lesson, I used the slightly toothier “right” side of the same paper, which imparted a subtle tree bark texture. However, sometimes I had difficulty building up heavy graphite when I wanted areas to be darker. The following week on the roots assignment, I used Strathmore 300 Bristol smooth, which was much easier for accumulating heavy areas of graphite. Fine lines and details were also much easier to make. The downside is that it has almost no texture, so I had to work harder to create that texture myself. I can’t say which is generally “better,” but each requires a different technique and has different results. I would choose the paper based on subject matter, desired texture, degree of detail, and other factors.

Below are some test swatches I made of hard and soft graphite pencils (Mitsubishi Hi-Uni in H and 4B), a relatively hard colored pencil (Faber-Castell Polychromos) and a relatively soft colored pencil (Prismacolor) on two types of paper – smooth and toothy. In addition, with any paper, the sharpness of the point is an important aspect to consider, especially with colored pencils (which Crystal Shin talked about extensively in her workshop last year). To test that, I used Caran d’Ache Museum Aquarelle (probably the softest colored pencil I’ve ever used) – one with a very dull point and one freshly sharpened. (I typically would not use a pencil as dull as the one tested here, but I do keep a dull one handy for quick life-drawing sketches.) All other pencils tested were freshly sharpened before each swatch was made.

In each case, I applied as much graphite or pigment as possible without flattening the tooth. In the case of graphite, that’s usually when it starts to look shiny. With colored pencils, it’s when it feels like wax is simply sliding around on itself and additional pigment is no longer being applied. 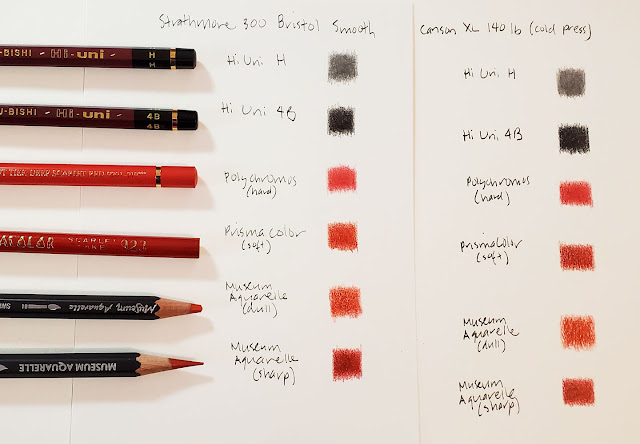 I hope the results are clear in these low-resolution images (I scan them at high res, but I know the blog platform reduces the resolution significantly). It’s easier to apply graphite or pigment evenly onto smoother paper, especially with softer pencils. (My Hi-Uni H sample looks strangely mottled in this test; I can’t explain that, as I’ve certainly gotten very evenly applied results on the same paper with the same pencil.) The difference between the dull and sharp Museum Aquarelles is especially visible. A soft, flat point simply cannot get into the recessed areas of paper, even a very untoothy one like Bristol smooth. 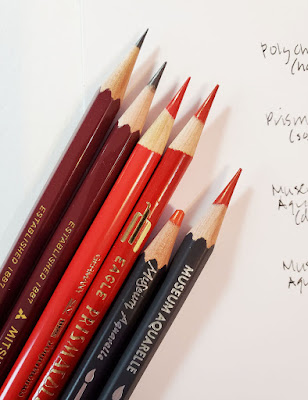 Using these artist-grade drawing papers for the course reminded me of similar class discussions when I studied with Suzanne Brooker several years ago (she had recommended Bristol smooth with colored pencils) and with Kathleen McKeehen last year. McKeehen had discussed papers at length and graciously gave each student a variety of small paper samples to try so that we could see all the differences in weight, texture and even color (just like wall paint, there’s no such thing as one generic “white”).

Paper and pencil: Equal partners in an important relationship.

For more thoughts and tests on the pencil and paper partnership, see these posts:

Material Lessons (In and Out of Class)

On Location with Traditional Colored Pencils