As a sketcher who started straight in with ink from the very beginning, I don’t do much erasing, even when I’m using graphite. (It’s not that I don’t make mistakes; I just restate errant lines or find ways to disguise them with shading.) However, aside from deleting errors, erasers have other skills that I’ve found useful in both graphite and colored pencil drawing – chiefly, replacing lost highlights and cleaning up smears. But unlike graphite, colored pencil can be difficult to erase.

My general curiosity about all colored pencils had prompted me to get a small set of contemporary Prismacolor Col-erase colored pencils a while ago. Their claim to fame is, of course, that they are erasable. While they might be a bit easier to erase than most colored pencils, the erasure is not complete, and they are not remarkable in any other way. The attached eraser is, as expected, laughable. I decided that erasable colored pencils are a nice concept, and then put the set aside.

Fast-forward to a couple of weeks ago when the batch of vintage colored pencils I received from Ana included a few Col-erase. Two are branded FaberCastell (no hyphen or space); one says Eberhard Faber; and a couple are not branded other than the Col-erase name. They all have a gold-colored metal ferrule with a dark blue band.

I didn’t have high hopes that they would be great for sketching, but in the interest of colored pencil science, I gave them a try. They have very hard cores – about as hard as Verithins, which are among the hardest I’ve used – but not hard in an unpleasant way. In fact, I found them relatively easy to build up color on Stillman & Birn Alpha paper.

One big surprise is that their relative smoothness and point retention makes them nice for writing. I sometimes have a need for writing with color when markers or gel pens aren’t quite right, and I think these might do the trick. I bet red and blue ones would make very useable marking pencils.

The second surprise was when I tested erasability. Of course, the attached erasers on the vintage Col-erase pencils were hard and useless (though probably no worse than the contemporary ones). After applying multiple layers of pigment and using my trusty Tombow Mono Zero, I erased out the small secondary highlight near the center of the tomato. Though not completely erased, most of the pigment came out quickly and without much effort. Smudges cleaned up nicely, too.

In the interest of research, I also compared an old Col-erase with its contemporary counterpart for erasability. Again using the Mono Zero, the vintage one erased more completely and with less effort, perhaps because the core is slightly harder. As a “control,” I tested them both against a Caran d’Ache Pablo in a similar hue, which is much softer than both Col-erase pencils. As expected, the Pablo took quite a bit of scrubbing and left behind more pigment than either Col-erase.

I probably won’t be using Col-erase pencils, older or newer, for drawing, but it’s interesting to discover that the vintage ones erase more easily (another case of older is better). I’m also happy to find a use for those hard cores for writing with.

This is the last installment of my vintage colored pencil series. I hope you’ve enjoyed reading my “research” as much as I’ve had doing it. If you know anything about any of these old pencils, please let me know. In the meantime, I’m going to continue poking around the Internet for colored pencil history. And of course I’m going to continue poking around in the pencil bins at thrift shops.


Read the rest of my vintage colored pencil series. 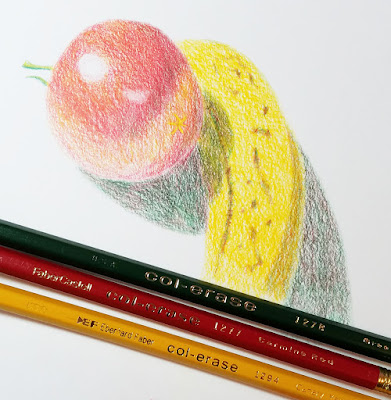