Does anyone remember my SuckUK incident? Early this year, I learned that a company with the unfortunate (and ultimately appropriate) name of SuckUK makes a ballpoint multi-pen containing the four CMYK colors: cyan, magenta, yellow and black. With my ongoing interest in CMYK primary triad mixing, I couldn’t resist giving the pen a try. While I applauded the company’s unique, innovative concept, my applause ended abruptly – as soon as I used it. After I wrote the review, I put the pen aside and dismissed it as another good idea poorly executed.

Fast-forward to a couple of weeks ago when a thoughtful blog reader brought this tip to my attention: The turquoise, pink, yellow and black inks contained in special editions of Bic 4-Color pens are, in fact, CMYK hues! Cue the exploding brain emoji! I could make my own CMYK multi-pen by putting the four ink refills into the same body – the SuckUK concept but with my beloved Bic inks!


Black is available in all standard Bic 4-Colors, but the other three colors are not. I immediately went to my collection of Bic 4-Colors for the inks I needed. If you want them, the one containing turquoise and pink (along with purple and lime) is the “fashion” edition. The one that includes yellow (with orange, purple and pink) is called the “Sun” edition. The easiest (and most adorable) way to get both is to spring for the Bic 4-Color pen holder collection that looks just like a giant 4-Color pen (the holder is as cheesy as the pens in material and construction; remember, we buy Bics for their inks, not for their bodies or cases). I just happen to have that holder assortment, so I was golden.

First, I made a mixing swatch and immediately liked the secondaries that the C, M and Y could make (below). But what impressed me was the black that came together with the three primaries – I didn’t even need the black refill! 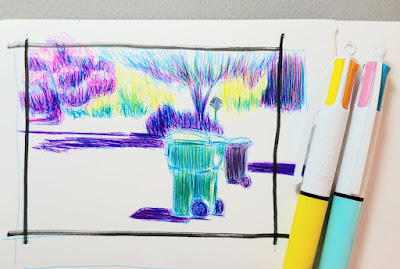 Trapped in the house during our seemingly endless days of hazardous smoke, I made this sketch on a trash day – what an ironic heartbreaker to have to resort to using a reference photo! But I was instantly cheered up when I saw the brilliant mixes I could get from Bic’s version of cyan, magenta and yellow.
As much as I enjoy drawing with Bics, I use them mostly for layered tones and, just lately, crosshatching. It’s unlikely that I would use Bics much as a coloring medium. Still, it’s good to know I could use Bics for full color if I wanted to (like on my trips to Gilligan’s Island). And color geek that I am, I was tickled to learn of this potential of Bics that had not occurred to me, despite owning all the colors. (Thank you, Dee, for bringing this to my attention!)

Since Bics are on my mind during InkTober, I’ll also briefly mention one that I learned about from members of the Bic Cristal Facebook group (yes, of course, there’s a Facebook group for that). Because France Van Stone favors “extra bold” 1.6mm Bic Cristals, I had used mine for several exercises in her crosshatching course. I appreciate the bold point that makes crosshatching faster, but the drooly, blobby ink is messy. I eventually switched to my favorite 4-Colors, which have 1mm “medium” points. That’s when I learned about the Bic Cristal UP, which is a separate line of Cristals with a 1.2mm point – just slightly larger than a standard 1mm Cristal and Bic 4-Colors.

I bought a pack, thinking that the Cristal UP might be a nice middle ground between the 1mm and 1.6mm. It is that; and the Cristal UP comes in nine colors (unfortunately, not yellow, or it would be another way to get the CMYK hues). However, its barrel is cheesier than a regular Cristal with a slightly rough texture. The feature I appreciate most about the 4-Color (other than being a multi-pen) is its thicker, more comfortable barrel. I’ll keep using the UPs for InkTober, but I’m not sure the cheesy barrel tradeoff is worth the slightly larger point size. It’s too bad the UP ink cartridges won’t fit into the 4-Color barrels.