Sometime in 2020 when I was in the depths of pandemic anxiety/restlessness/boredom (a dangerous retail therapy combo), I first heard about Caran d’Ache Museum Aquarelle leads. The predecessor product to the woodcased pencils, these 3.8mm leads were discontinued in 2013 when Caran d’Ache introduced the Museum Aquarelle colored pencils that I know well and love.

It was right around the time I was experimenting with Koh-i-Noor Mondeluz watercolor pencil leads, which just happen to be the same size. I had already decided that leads weren’t as practical as woodcased pencils, especially in the field. With a limited number of clutches, I’d have to constantly swap out leads. But I couldn’t stop thinking about them: Museum Aquarelle leads – a different form factor for my favorite watercolor pencils (this is where the animated twinkle appears in my eyes)! Down the deep rabbit hole I went.

Much Googling and many inquiries later, I realized that the leads were elusive, even on auction sites. I would have settled for a used set or even some open stock single leads to try, but they were not to be found, either.

Once I start digging, though, you know I don’t back out of a rabbit hole easily (especially during a pre-vaccine pandemic when there’s little else to do). More than six months later, I learned that the one remaining set of Museum Aquarelle leads on planet Earth was still available at the Sennelier art supply shop in Paris! That’s the very same Sennelier store where I had shopped in 2015! If I’d known then what I knew in 2021, I could have purchased the set there and carried it back home with me!

Alas, I did not; instead, I paid a sweat-inducing cost to have the set – the very last on Earth, mind you – shipped from Paris!


Interesting how similar the set looks to the Koh-i-Noor set – coincidence? The Caran d’Ache set comes with some different accessories, however. In addition to a brush, water-soluble graphite leads and clutches, which are also included in the Mondeluz set, the Museum Aquarelle set comes with an eraser, a water dish, a tube of white gouache and an empty glass tube to carry leads in the field. (The store included a couple of extra leads of a color that had been found broken in the set. That was a nice customer service gesture toward the crazy American who was having the set shipped all the way to Seattle. Amazingly, the other leads arrived unbroken.)

Even the lead holders look similar. Unfortunately, just like the Koh-i-Noor, the Caran d’Ache is heavy, unbalanced, even longer than the Koh-i-Noor and uncomfortable to use.


The set comes with 18 colors, which are apparently all that had ever been made in this form factor. The first thing I did was to compare the lead colors with their woodcased counterparts. I was very pleased to find that both the pigments and their softness are identical. I don’t have proper calipers to measure, but visually and using a ruler, they appear to be the same thickness also. 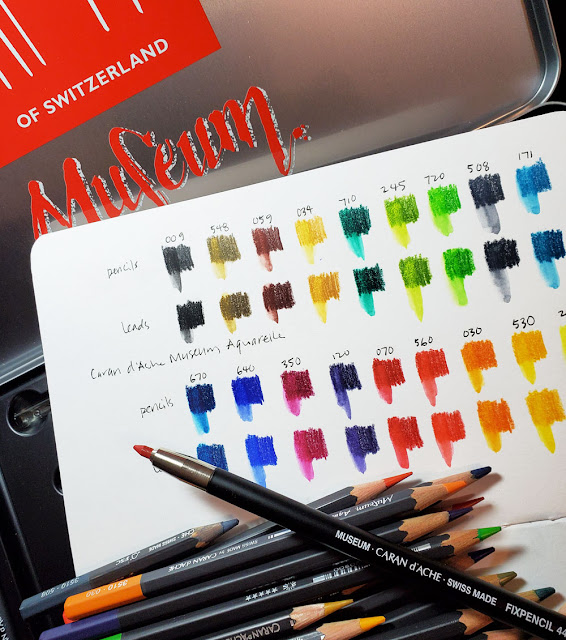 I was eager to try the Museum Aquarelle leads in the field – but there was one problem. The Caran d’Ache 3.8mm clutches are just as clumsy to use as the Koh-i-Noor. I had been on a quest ever since I got the Koh-i-Noor set to find lead holders that would make the leads appealing to use. Unfortunately, 3.8mm lead holders are not easy to find. I like the ergonomic shape of the Pilot Croquis, which I used for a while with the Koh-i-Noor leads, but it’s awkward to fill. In addition, its “twist action” to extend and retract the lead is not intuitive to me in a mechanical pencil. I kept looking.
Recently I discovered the Kutsuwa Neonpitsu Knock highlighter pencil, which comes with a 3.8mm highlighter lead. Lightweight and easy to fill, it has a knock that extends and retracts the lead, which is how I like my mechanical pencils to operate.

Then I learned that the Tombow Mono Knock eraser, which also fits 3.8mm leads, has a similar body style – and costs less than the Kutsuwa highlighter. (Incidentally, the Tombow Knock eraser is excellent with graphite and good with colored pencils, too.) Identifying the lead colors in the neon- and pastel-colored clutches was resolved with washi tape.
Next was the sharpening issue. The Koh-i-Noor set came with sandpaper, which is the ideal way to sharpen these soft leads, but it’s messy. The heavy clutches have attached lead pointers, which are also messy, but I’m not using those clutches anyway. The first few times I used the leads, I realized that it’s not difficult to maintain a point if I just keep turning it as I draw. I don’t need to sharpen them much in the field. At home, I use sandpaper over a wastebasket.

Now that I finally have several comfortable lead holders, I’ve been putting the Museum leads to use. In March when our forsythia was in full bloom, I gave the leads a workout with a primary triad. It made me realize that using a limited palette is an ideal choice for the leads. I had already decided that changing out the leads in the field would be cumbersome and impractical. Though not weighing more, carrying a large quantity of plastic lead holders would be bulky and similarly impractical. But a carefully selected three or four would be ideal. 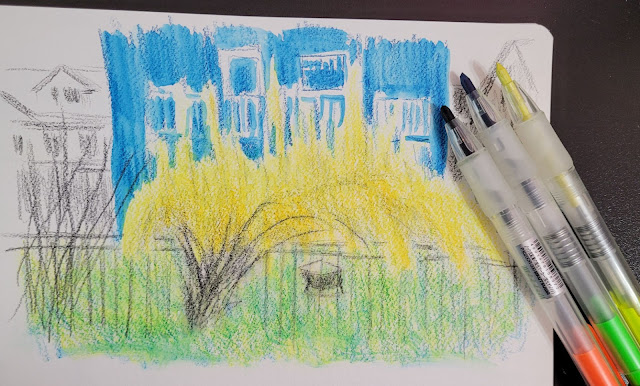 In fact, three or four colors is what I try to stick with in my tiny fitness-walking/pandemic bag. I’ve been carrying Museum Aquarelle leads in CMYK colors on my walks, and I like that they always remain a comfortable length without having to use extenders when they get too short. 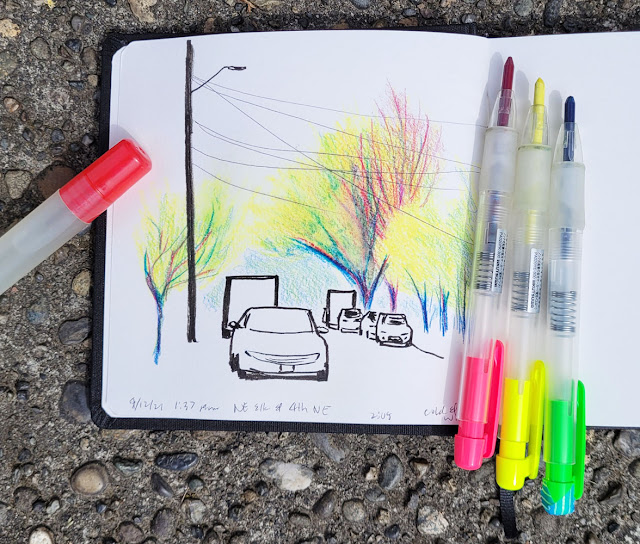 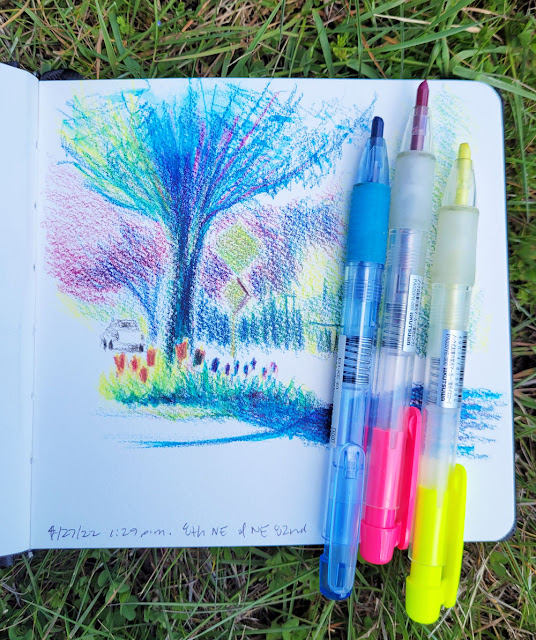 The downside is that I find it difficult to lay down large areas of color aggressively, as is my habit with Museum Aquarelle pencils. Although the cores are the same, the lead holder’s collar gets in my way when I lay the lead down at an angle.

The leads also feel different in other ways – similar to the difference between writing with a mechanical pencil and a woodcased pencil. I feel a little less connected to the point; the feedback from the paper’s surface is less direct.

The big question remains: Why? Why use Museum Aquarelle leads when convenient, woodcased Museum Aquarelle pencils have replaced them – in 76 colors instead of only 18 – and which I already love? If I had been sketching with watercolor pencils before 2013 when the leads were still readily available, I’m sure I would have fallen in love with their rich pigment and softness. Eventually, though, I would have complained that they came in only 18 colors. You would have heard me rant here on this blog, “Who needs these clumsy lead holders? Come on, Caran d’Ache – why not put these fabulous leads into wood pencils? And while you’re at it, give us more colors!”

Luckily for me, I don’t have to wait for Caran d’Ache to respond to my retroactive rant; I’ve been happily using the much-improved form factor for years. But I’m not sad or disappointed that I can’t rave about Museum Aquarelle leads; it would be horrible to fall in love with a product that has been out of production for nearly a decade. Besides, the quest for, the triumphant discovery of and the eventual thrill of receiving the set from Paris were just what I needed to distract me from 2020. I’m grateful for anything that did that. 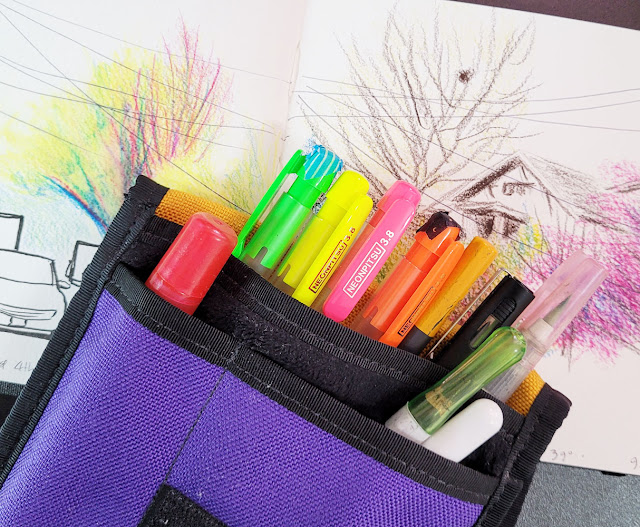