Saturday was national Independent Bookstore Day. Arriving a few minutes before it opened, I got a parking spot that gave me a similar view of Third Place Books in Ravenna as I sketched last year for the same event.

When the doors opened, people who had been waiting outside cheered, setting off the store’s festive mood. Kids got free balloons. I spun the wheel for a chance to win great prizes (mine was a piece of candy). I don’t think I’ll get around to all of Seattle’s indie bookstores this week to complete my passport (the day has been stretched out until May 9 this year to ease crowding), but I’m doing my best to support a few. I started with Blackwing pencils. For the second year, the pencil maker produced a limited-edition pencil that was for sale on April 30 only by indie book shops across the country. 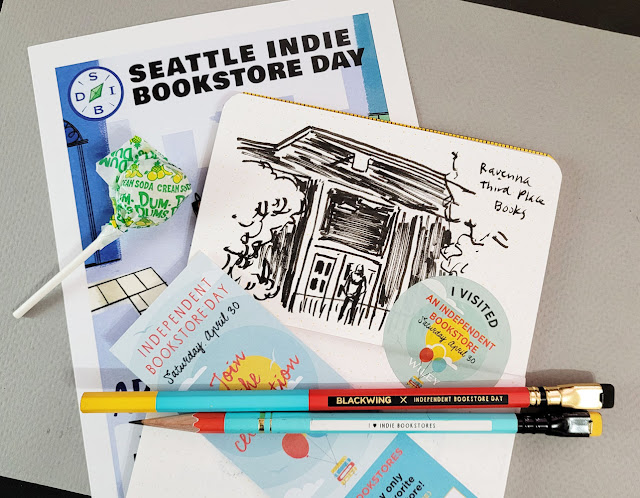 After a drizzly morning, Saturday afternoon turned out surprisingly sunny and warm. I decided to take a top-down ride to Capitol Hill. Ada’s Technical Books & Café, where Urban Sketchers Seattle had sketched years ago, has a cute storefront that was probably a house at one time. I hadn’t been in that part of Capitol Hill since before the pandemic, though, so I didn’t know that an outdoor restaurant seating shelter had been put up – blocking my view of the store from across the street. As I sketched, I sadly thought of sketcher Lynne Cotie, who passed away last year. She was the one who had suggested that we sketch at Ada’s back in 2015.


Afterwards, I went into the store for a snack and looked around briefly. As you might guess, I couldn’t think of a single “technical” book to buy, but one colorful item did catch my eye.