I’m a Pencil of the Week Cover Girl

Now that the issue has released, I can finally reveal a project I worked on all summer! More than six months ago, Ed Kemp contacted me about collaborating on an issue of the unique zine he writes and publishes, Pencil of the Week. Possibly the first-ever zine of pencil reviews, PotW offers Ed’s down-to-earth, bluntly stated, no-bull opinions of the many graphite pencils he uses daily on the job and elsewhere. A happy reader and subscriber for a while, I was thrilled when he proposed working on a project together!

Naturally, being of the colored pencil persuasion, I had suggested a special edition of reviews of red/blue bicolor editing pencils (you know how much I love those), which I knew he used. We went back and forth with ideas, and eventually I developed a cover design for issue No. 15.5. Since zines tend to be of a handmade nature (Ed handwrites all the pages, which he then photocopies, collates, folds and staples to produce each issue), I decided I would hand-color the first 64 covers. For copies he sells after those sell out, I also produced a color digital version that he can print from.


In my excitement, one thing I had not considered until after I made the proposal was that typical copier paper is terrible to color on with colored pencils. It has almost no tooth, and unlike on smooth drawing papers, pigment seems to slide instead of adhering. I went to my local FedEx Office store for some paper samples. I also tested a number of different colored pencils in my collection to see which would be best on the less-than-ideal paper and to find just the right shades of blue and red. Prismacolor was my choice – for the right colors, the right softness with the paper, and ease of replacing singles (since I knew I would burn through several pencils).

Although I still wouldn’t recommend it for drawing with colored pencils, the 32-pound white seemed to have the most accommodating surface. I photocopied the line drawing onto the paper 2-up, and then the fun could begin! I spent many happy summer days out on our shady back deck coloring the covers.

I just received my copies of 15.5, and it’s a blast to read Ed’s ranked reviews of 15 red/blue editing pencils, including the stunning surprise No. 1 – a red/blue I hadn’t tried! But Ed kindly sent me some, and it’s fantastic to use as well as beautiful! 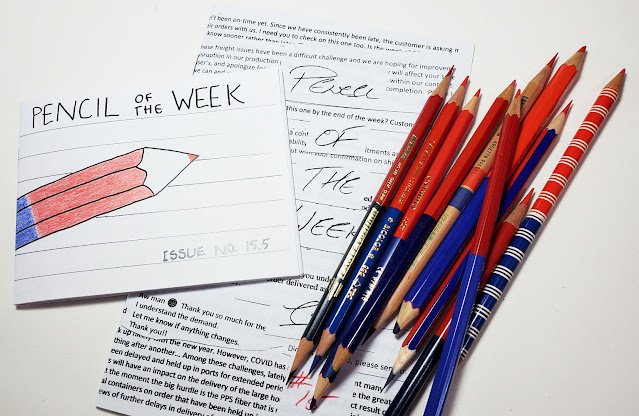