When I spotted this set on eBay, I did a double- and triple-take. The tin design was very familiar. I looked at the image I had clipped from Caran d’Ache’s own historical timeline, below (the page is no longer online). The tin of Prismalo pencils shows the same iconic snow-covered Matterhorn, a field of red wildflowers and three pencils pointing to the sky.

The same image is used in the insert that came with my Prismalo 100th Anniversary Edition set (below). In all Caran d’Ache’s historical information, the name Prismalo is associated with the world’s first water-soluble colored pencil, introduced in 1931, which “revolutionised the world of design and color.”

The design of the pencils themselves looks closer to the set of my oldest Cd’A Prismalo pencils (which I’ve deduced to be from the ‘30s) than to anything else I’ve seen. The 999 product designation is the same as on those oldest Prismalos, and the ends are similarly uncapped and unfinished. (Later and contemporary Prismalos have white painted end caps). 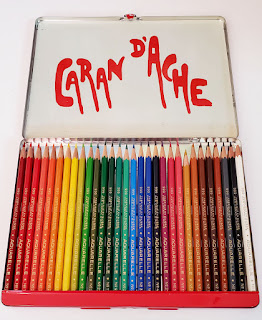 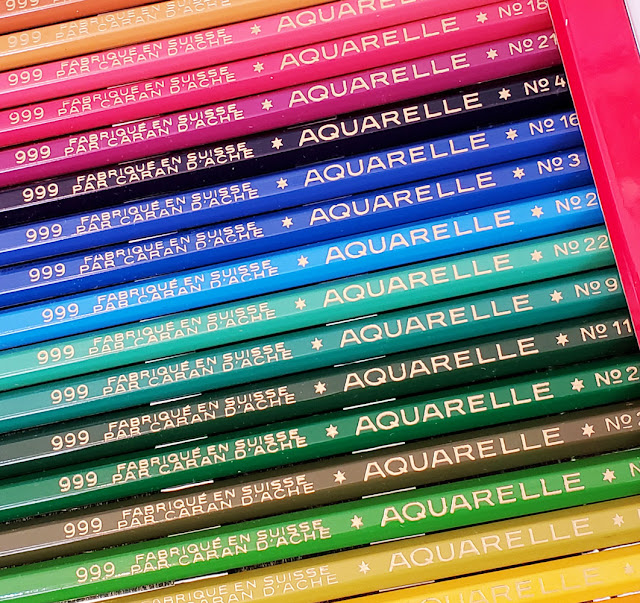 The only definitive dating clue I have is the price sticker on the bottom of the tin: The set was originally purchased at Stix Baer and Fuller department store for $4.50. The eBay seller had pointed out that the set must be from before 1984, since that’s the year the store had closed (the Wikipedia article confirms this closure date).

If this set is not called Prismalo, but the box and pencils otherwise look very similar to much earlier Prismalos, and as Caran d’Ache’s groundbreaking watercolor pencil product, Prismalos seem like they should have come first, what the heck are these, and where do they fall in the product history? And why??

I’m having déjà vu of another Cd’A mystery I uncovered when I spotted a generic “water-soluble” set that looked exactly like the set called “Supracolor I” and another set called “Prismalo.” Make up your mind, Caran d’Ache!

The set in question came with an insert that provides some historical background that was new to me:

“For thick lines and for tone effects the Caran d’Ache Polycolor 142 coloured crayon, featuring a thick, rich lead, will continue to be the ideal instrument. The Caran d’Ache Prismatec 101 pencil, with its thin, hard colour lead, is especially suitable for technical drawings, etc. It is an excellent substitute for Indian ink. The Aquarelle 999, which takes its place between the two foregoing types, will certainly render excellent service to the artist, since in addition to its other functions it can be used to obtain water-colour or wash effects.” 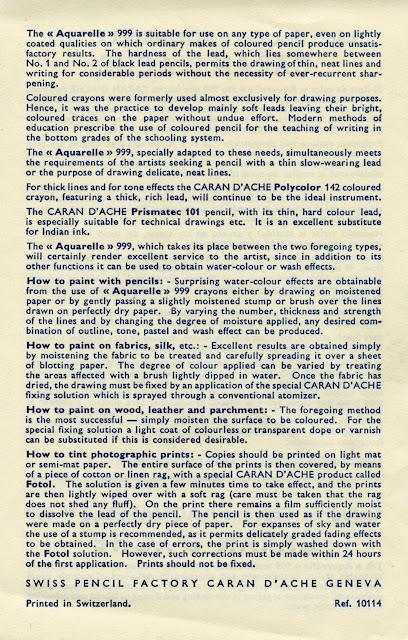 I don’t think I’ve seen either Polycolor or Prismatec pencils during my eBay searches of vintage Caran d’Ache products, so now my curiosity is piqued – and I have two new things to hunt! Regardless of the mystery, I love having this tin with the iconic Caran d’Ache image that the company obviously saw as emblematic of its revolutionary aquarelle colored pencils. (I just wish the company had made it easier for us colored pencil historians. Sigh. . . my work is never done.) 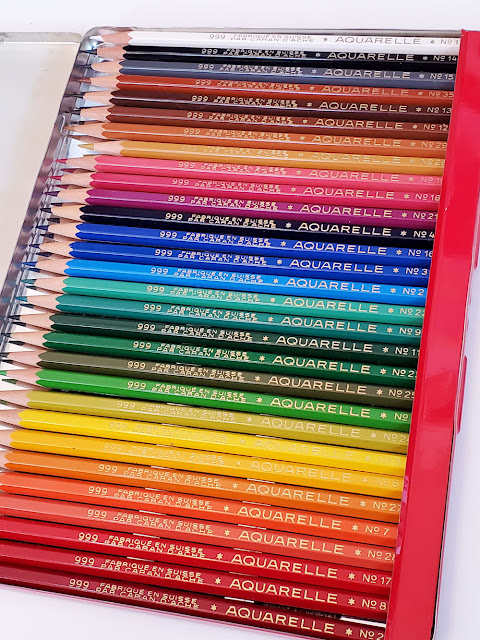