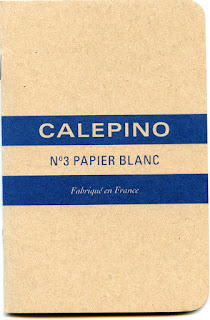 Is it possible I’ve discovered the “grail” of pocket notebooks?

No. But pretty dang close.

When I realized that the latest Field Notes Workshop Companion edition contains paper that’s sketching-friendly (as defined by me, this means not just fountain-pen friendly but also able to withstand a light waterbrush wash without bleeding), I rejoiced – with two caveats: The paper has a (tolerably pale) dot grid, and the books are a limited edition, so they won’t be available indefinitely. Still, the sketching-friendly paper is certainly reason enough to rejoice, and I did – by buying more.

Two weeks later, I was reading the Pen Addict’s blog, where the Calepino notebook was reviewed. Although the paper is 60-pound weight (compared to Field Notes’ 70 pound), reviewer Jeff Abbott had nothing but good things to say about its fountain-pen-friendliness. Of course, he didn’t test it for sketching friendliness, so I didn’t wet my pants over the review, but here’s the sentence that made me bounce a few times on the couch: The notebook “comes in a nice variety of paper markings, from lined, blank, dot grid, and graph.”

While pocket notebooks in this form factor are a dime a dozen, finding one with blank paper is nearly impossible (the only one I know of that is ubiquitously available is the Moleskine Cahier, but don’t get me started on the paper in it!). I immediately ordered a three-pack from CW Pencil (which seems to be one of very few US retailers carrying the French-made Calepino).

I took the Calepino out this week, and my very first test (shown at right) got a frowny face. Although the paper is sufficiently opaque that there’s minimal (acceptable) ghosting, the back side of the sheet revealed small dots of water-soluble ink bleeding through where my fude fountain pen had paused momentarily. I made a heavy scribble at the bottom of the sketch, and when I washed it with a waterbrush, some of it bled through also. Washing other sketched lines did not bleed. But then a couple of pages later (below), I used another fude fountain pen containing a different water-soluble ink, and this time almost no bleeding was evident, even with washing. (Perhaps my hand was moving more continuously and fluidly on that sketch.)

My juicy Kuretake brush pen containing Platinum Carbon Black ink was surprisingly delightful to use on the Calepino – no bleeding at all, and the surface is smooth enough that the brush moved easily (below).

Although I typically wouldn’t use anything but a fountain pen in this type of notebook, I wanted to give it thorough testing. The other day I pulled out the entire mixed-media arsenal in my bag (except watercolor, which I wouldn’t expect any writing notebook to be able to take): waterproof Platinum Carbon Black ink in a fude fountain pen; water-soluble ink in a fude fountain pen; inks applied with waterbrushes; Zig marker; water-soluble colored pencils; light washing of the ink and colored pencils with a waterbrush (sketch shown at end of post). The fountain pen containing Platinum Carbon left a few telltale pen points on the reverse side, but none of the other media bled. Inks applied with waterbrushes buckled only minimally. All the media I tested passed acceptably. (Incidentally, since I rarely sketch with graphite, I didn’t test it, but the paper has just enough tooth that graphite would probably be as pleasant to use as colored pencils are.)

If it wasn’t for that minimal pen-point bleeding, the paper would be flawless. On the other hand, that completely blank page counts for a lot, as does the fact that the notebook is apparently available indefinitely. It’s not the grail, but it’s definitely a keeper.

(Now if only Field Notes would come out with a standard edition containing 70-pound, blank paper, or if Calepino upgraded to a slightly heavier stock, my life would be perfect. But since neither scenario is likely, I’ll relax and sketch on the notebooks I now have. After all, perfection is boring.) 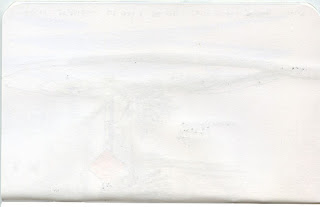