Less than 2,000 steps from home, Cloud City Coffee is where I cut my teeth as an urban sketcher. For people sketching, I later favored Zoka Coffee because its large interior and unlimited free wi-fi encouraged Internet squatters to become excellent (though unwitting) life models. But one thing Cloud City has that Zoka (or any other coffee shop) doesn’t have is a fabulous sign – one that I have sketched many times.

The first time was early in my sketching life in 2012. A couple of years later I sketched it from across the street instead of from the café itself. Most recently was in 2016 when the sign was repainted and the logo redesigned. 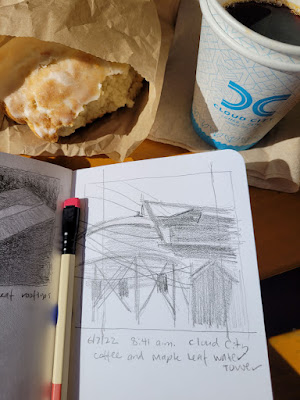 Now that the weather is finally becoming hospitable, I’ve been thinking about cafes with outdoor seating, and Cloud City sprang immediately to mind. I’ve sketched the entire sign often enough that it was time to try a different composition. Surprisingly, even though our neighborhood’s iconic water tower stands right behind the sign when viewed from the outdoor tables, I’ve never sketched the two together (I deftly avoided the tower in my 2012 sketch). It was tempting to include the entire tower, especially with that nice sunny spot on the left, but this tight crop was the one I had liked in an initial thumbnail, and I wanted to try it.

Hardest to resist were the sign’s colors (bright yellow and sky blue), but the entire sign was facing away from the light, so I kept the colors subdued. I gave in, however, to a few letters in Cloud City’s name as homage to the best coffee shop in Maple Leaf.