Practice has been an ongoing theme on this blog. It was the topic of my very first blog post, in fact, and it has come up time and time again. It’s obviously on my mind.

Recently the concept of deliberate practice came to my attention again (the first time was in 2016 after reading an NPR article) in an article by James Clear: “The Beginners Guide to Deliberate Practice.” The article cites several examples of people (often athletes) who have developed purposeful and systematic practices to improve their performance. “While regular practice might include mindless repetitions, deliberate practice requires focused attention and is conducted with the specific goal of improving performance,” Clear says.

Liz Steel, who is always interested in process and practice, has been influenced by Clear’s book, Atomic Habits. Her comments in a recent post (where I learned about the Clear article) resonated with me:

"Practice is very important but it’s only part of the picture. To see real development in your work you need to add some research to your practice – it must be deliberate practice. Otherwise, it’s easy to get a little stuck and do the same thing over and over (get into a holding pattern). It’s even possible to cement bad habits."


I have had the same thoughts and made similar observations about my own drawing practice (and that of others). In the early days and months of beginning to draw, I think any kind of regular, ongoing practice is beneficial. At that stage, it’s more about developing and reinforcing the habit of drawing, because once it becomes a habit, the practice will be much easier. And during that early period, many sketchers make amazing, remarkable progress because they go from “zero to 60” simply by drawing regularly (when they weren’t drawing at all before).

In my own early days, I made many urban sketches from my parked car, and that taught me composition, which was helpful in the long run. Eventually, though, I stopped learning anything new from these curbside sketches, and although I still enjoy making them, I don’t consider it deliberate practice (unless I’m working on something like color temperature, in which case it is).

At some point, if they are only doing self-study, most people will start to plateau in their skills without the active help of books, classes, research (as Liz advocates) or some other form of more deliberate practice. Even reading books, viewing video tutorials or taking classes are unlikely to have long-lasting benefits unless one actively works toward internalizing the skills learned and making them a regular part of the practice.

An excellent instructor can make a significant difference at this stage because they will not only critique your work in a productive way; they will also teach you how to critique your own work. Clear says:

"One consistent finding across disciplines is that coaches are often essential for sustaining deliberate practice. In many cases, it is nearly impossible to both perform a task and measure your progress at the same time. Good coaches can track your progress, find small ways to improve, and hold you accountable to delivering your best effort each day."

A major problem with learning to draw (as opposed to improving one’s golf game or basketball shots) is that it’s difficult to measure progress. If I look at a sketch I did 10, five or three years ago and compare it to one I did recently, I would hope to see improvement – but that’s not the same as winning a greater number of chess matches. Still, it’s something to think about: How can drawing progress be measured?

Liz’s comment about “cementing bad habits” also rang true for me. When I was attending life drawing practice regularly at Gage, I saw some improvement over time, but I also realized I was repeatedly making the same proportional mistake. Once I became aware of it, I had to make a very conscious effort to keep from falling back on old habits that reinforced the mistake. I still catch myself sometimes making it, but usually I catch it while I’m in the act of making it (which I consider a win compared to not catching it at all).

When I was drawing my hand for 407 consecutive days, that was definitely a regular practice, but it certainly was not always deliberate. Often it was nothing more than a repetitive exercise that varied only by pose or medium. During the 63 consecutive days in which I drew with my non-dominant right hand, that practice was very deliberate, and when I finished, I not only saw visible improvement in my skills; I was also confident that if I ever injured my left hand, I could still draw with my right without missing a beat. (I’m not saying the drawings would look the same, but I realized that I could use that hand, and I could see that my brain was attached to it!)


Currently I am copying masters from the Robert Beverly Hale book as a form of deliberate practice. Sometimes I catch myself simply using the master’s drawing as a model and redrawing it “my own way,” but that’s missing the point. I stop and make myself copy each mark as closely as I can, because that’s when I start to “feel” the artist’s hand. I can see original lines and how they were restated, and I copy all of those, because then I can hear the artist thinking: “That shoulder is too narrow; it needs to be widened here.”

A note about the copy of Raphael Sanzio’s drawing of Michelangelo’s David (top of post): I first studied this drawing nearly seven years ago in a pen and ink class. That class was the first time I learned how hatched lines should follow the form, and this drawing by Raphael drove home that point. Every mark is meaningful and economical; nothing is random. (This reinforces Melanie Reim’s advice to me in her workshop years ago: Every line and mark should be intentional, not a random scribble.) When I made this copy with colored pencil, I realized I should be using a dip pen and ink again, like the original, to study it more fully. Although I tried to copy the marks as closely as possible, I lost some of the delicate lines that weren’t possible with a soft pencil.

The only time I saw the real Michelangelo’s David in Florence was in 2006 – several years before I began drawing. At that time, even without drawing experience, I felt that I could spend literally days just sitting on the Accademia floor, gazing up at the extraordinary beauty and mastery. Many times since I began drawing, I have wondered how I would ever draw it – because draw it I must – if I ever go to Florence again. How’s that for an intimidating prospect? In the meantime, I’ll keep deliberately practicing Raphael’s version. 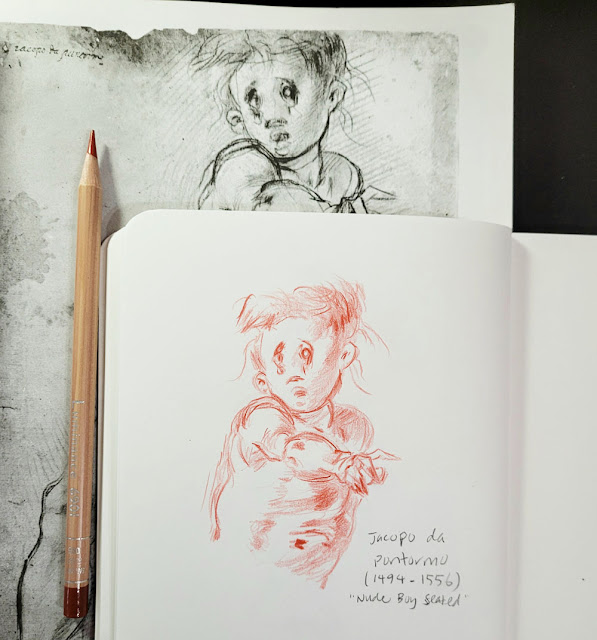 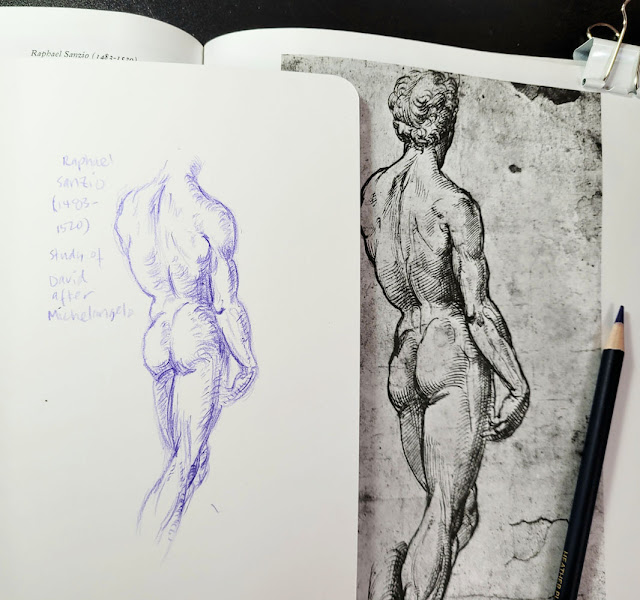