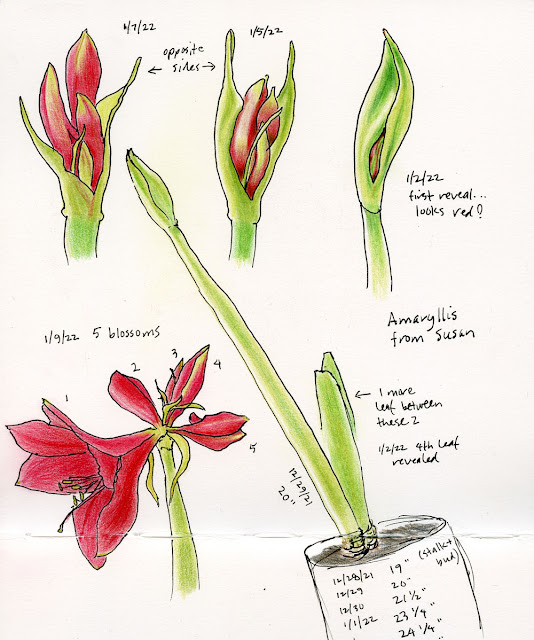 I have never been big on house plants, mainly because they usually drop dead as soon as I walk into the room. However, the amaryllis that a friend gave me has brought me much pleasure in more ways than one. First, it has been growing and changing so quickly that it’s simply fun to watch; it’s almost a pet more than a plant. Now that it has bloomed, it is giving our kitchen a much-needed splash of color during these dismally dark winter days. Most of all, I have so enjoyed documenting its changes in my sketchbook. I filled a spread in my 7 ½-inch square Stillman & Birn Zeta sketchbook with two weeks of its growth.


Now that all five blossoms are fully opened, I think I have only one more sketch I want to do: a portrait of a single blossom.

Speaking of five blossoms, I was curious about why one bud was so far behind her sisters (noted as No. 3 in the sketch). I realized it had been tucked behind another, so I gently pushed the showy sister’s petals away. Exposed to the window directly now, the fifth blossom perked up! See below for a few photos I took whenever I sketched.

Technical note: This line-first-filled-in-with-color style (which I call the “coloring book” method) is the way I started when I first began urban sketching. It’s an efficient, straightforward technique that many sketchers use. I gave it up gradually as I made the transition away from watercolors and toward water-soluble colored pencils; it has been years since I’ve used it on location. Using it again here gave me a lot to think about related to drawing with lines. Stay tuned as I try to clarify those thoughts by mumbling aloud.