Here’s the finished drawing of the Japanese ornamental cherry leaf that I began in Crystal Shin’s workshop. During the six-and-a-half hours that I worked on it, I had a lot of time to think about the process for making this type of botanical drawing. Although most traditional botanical artists begin by drawing their specimens from direct observation, they necessarily finish the drawings from photos because their painstakingly detailed and intricate work can take many (50, 100 or more) hours to complete.

As Crystal had recommended, I took plenty of reference photos while my leaf was still fresh from the wet pavement last Friday on our first respite after days of deluge. Even by the workshop’s second day, I could see that my leaf’s edges were starting to curl, and its colors didn’t look quite as vibrant. I had to make a choice: Finish the drawing using the reference photos, or continue drawing from the actual leaf – even as it continued withering.

I recalled the peony I had drawn last summer in Kathleen Moore’s class. In my warm, sunny studio, my poor peony had visibly drooped and wilted even as I was drawing it, and by the second day, it fell apart completely. That time, too, I had the choice of continuing to work from a photograph, but if I had, I think I might have beaten the life out of it. It was done enough that it looked finished without losing its freshness. The collapsed blossom had saved me from overworking the drawing.

I also thought about the last tomatoes we received from Alice. During the four days that I took to draw them, the tomatoes had continued to ripen, and by the end, their colors were completely different from when I began. I drew one tomato each day based on whatever color it was that day. By the time I finished, the completed drawing resembled neither the actual tomatoes nor a photograph taken on any given day.

Although I understand why traditional botanical artists must depend on photo references for the type of work they do, the problem with using photos is that one could then continue working on a drawing forever (literally). As I noticed my leaf changing, I started looking at it the way I approach urban sketching: Cars and people come and go; the light shifts; clouds pass over the sun. Everything changes constantly. The pressure but also the sheer fun of urban sketching is keeping up with the pace of the scene I’m trying to capture.

You’ve probably guessed by now that I decided to make my leaf drawing entirely from life. I did feel a pressure to finish in fewer days than I may have otherwise, but I enjoyed that pressure and its inherent challenge. I enjoyed keeping up with whatever changes the leaf would continue to show. And I was happy and relieved that I had reached an acceptable state of “doneness” in six-and-a-half hours. Certainly, I could have continued – but not without the risk of overworking it and not necessarily improving it.

There are many reasons why I wouldn’t want to spend 50 or a hundred hours on a single drawing of a leaf, not the least of which is that I’d be afraid of beating the life out of it. As I completed this class exercise, I felt a renewed joy in botanical drawing. It doesn’t have to be something I labor over for weeks. I felt liberated knowing that I can approach an ornamental cherry leaf plucked from the pavement in the same way that I approach any neighborhood scene or the houses across the street. My hope is that my drawings are more likely to be a fresh response to what I’m seeing, just as urban sketching is.

Technical notes: Now that you can see the finished drawing, I’ll mention the high points and challenges I had. In general, I’m happy with the result, especially the curling edge at lower right and the overall palette. The upper part of the leaf, however, was not what I intended. The tip was curling forward, casting a soft shadow on the leaf’s top half. Working hard to convey that curving form, I think my result looks more like the top half of the leaf’s local color was brown.

At this point, I don’t know if it can be corrected because not much more pigment can be applied in that area; I’ve already worked the paper pretty hard with lots of layers. But since Crystal offered to provide feedback after we had finished our drawings, I have submitted mine with that question. If she makes a suggestion that is still workable at this point, I might try to fix it. Or maybe, like so many urban sketches that don’t go as planned, I’ll leave it alone and use her advice on the next one.

I used some techniques from the workshop that were new to me or that I typically don’t employ:

For the central vein, I incised the paper with an embossing stylus, then colored the incised line afterwards. Incising the paper prevents the pencil pigment from being applied to the line, which remains paper white until it is colored later. I’ve used this technique in other classes, but I usually don’t remember to otherwise. I also didn’t have proper embossing tools until this workshop, as Crystal highly recommends them. I got five for six bucks on Amazon.

One hidden benefit of this technique is that the incised line stops the pencil tip from crossing over and blurring a drawn line. For all other veins, I simply drew them, and they became a bit blurry as my pencil tip coloring around them bumped into them. The incised line remains crisp and sharp. (Note: It’s difficult to draw a fine line over an area where many layers of pigment have already been applied. If a vein line is not being incised, Crystal recommends drawing it early and continuing to darken it as needed.)

As I’ve heard many drawing instructors and authors say, Crystal reminded us that nothing in reality has an outline around it. To avoid a hard outline around the leaf, I gently “pulled” color away from the edge with tiny, curved pencil strokes as she had demonstrated. The result is softer than a drawn outline.

One aspect of color that I have become fascinated with since I started studying CMYK-based primary triads is optical mixing: Instead of blending like liquid paints, dry colored pencils depend on multiple transparent layers to appear mixed (similar to glazed watercolors). Crystal showed us examples from other artists who take advantage of optical mixing principles in their work by leaving more space between pencil strokes rather than blending thoroughly. I tried to emulate them, but it’s not really apparent in my leaf. I’m going to keep working on that. 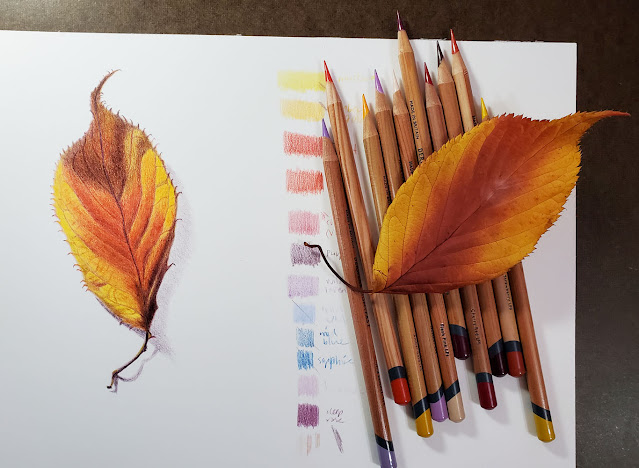