Color Temperature: Back for More

After I took Sarah Bixler’s portrait workshop a couple of weeks ago, I felt like I had barely touched the tip of the iceberg in terms of understanding color temperature. I wanted another opportunity to internalize the concepts so that I can apply them on my own. Last weekend, she offered a second workshop on the same concepts, this time for two days in figure drawing, and I jumped right on it.


The exercises during Day 1 were similar to ones we did in the portrait workshop. With a complete figure to work with, though, instead of a head and clothed shoulders only, we could more fully explore a wide range of color temperatures. Humans have a remarkable range of subtle hue changes throughout the body: The palm is a different color from the back of the hand; the thigh is different from the forehead. In the previous workshop, I thought that the same concepts could be taught using inanimate subjects like still lives, but I no longer think that’s true. The human figure is a much richer though subtler “palette” of local hues than a blue vase of red flowers – a palette that’s much more challenging to see.

Further complicating matters is the type of lighting – natural or synthetic – and how close it is to the model: Skin closest to the light source tends to be warmer in color temperature, and local color is usually more apparent on the side away from the light. In the morning, we took advantage of natural light in the studio and kept the spotlight off. By late afternoon, we needed the lamp, which was cooler than natural light.

After a set of one-minute poses to warm up, we used two contrasting colors – one warm, one cool – to draw model Dee for a series of five-minute, 10-minute and 40-minute poses. Before settling on this pair of muted blue and red, I tested it by making a scale from warmest to coolest in two values (above).


For the final 40-minute pose, we were to use two analogous colors (I chose green and blue), which made it much harder to make distinctions between cooler and warmer areas. By the end of the second 20-minute session, I felt I had lost the warmest spots, so Sarah suggested I add something like neon yellow to make those spots pop.
On Day 2, with Randy as our model, we explored a wider range of exercises and palettes. In the morning, we used a veritable rainbow of hues. The colors were not used randomly, however; they were all still used to express color temperature differences (though not very subtly). Since the human figure is basically a palette of neutral tones, these extremely non-neutral, saturated hues really forced us to observe and then decide on the relative color temperatures we saw. One of my stated goals for the workshop was to get out of my rut of depicting colors so literally in sketches, and these exercises in drawing “rainbow man” certainly helped!

In the afternoon we did a fun value study using adhesive tape in two colors to make a collage.
For the final two drawings, first a 40-minute and then a 20-minute pose, we were to choose three colors and then two. For the 40-minute pose, I used a secondary triad of a bright purple, a muted orange and a bright olive green. Surprisingly, the green turned out to be the warmest hue when I made the initial color swatch (shown below after the sketch).

When testing three hues such as a triad, Sarah prefers this triangular-shaped format instead of the traditional circles. With circles, the blended areas end up being fairly small. Triangles give all the swatches equal space. I prefer triangles too and will be making my blends this way going forward.

When we got to the final 20-minute drawing (I chose complementary orange and blue), I repeated the neon yellow trick to bring out the warmest spots at the end.

Throughout the weekend, Sarah showed us examples from art history and even computer animation in which the artists had manipulated color temperature to give the sensation of the direction of the light. It was all so fascinating!

In the same way that I marveled at Crystal Shin’s sharply honed eye for color inbotanical subjects, I was impressed by Sarah’s equally keen eye for subtle differences in color temperature.

With a more intensive weekend of training under my belt, do I know enough now to apply what I learned about color temperature to real-world sketching? I guess we’ll both find out! In any case, it was an amazing opportunity to have my eyes opened to an aspect of color that I had never paid much attention to before. 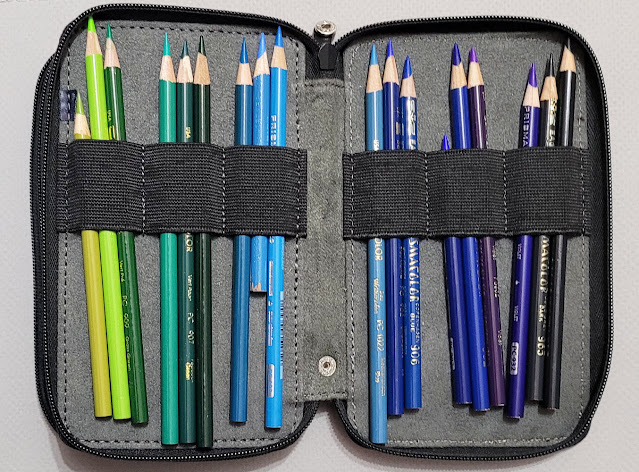