While Americans think of graphite pencils with attached erasers as the norm, they are not commonplace in other parts of the world. And while colored pencils with attached erasers are certainly not typical, I’ve seen enough of them, especially vintage ones, to realize that they are apparently valued by some. Personally, if I had the need to erase a work done in colored pencil, I’d know it was a delicate operation, so I’d probably use a kneadable art eraser or some other separate eraser. Erasers attached to colored pencils seem unnecessary.
You can imagine, then, how high my eyebrows lifted when I spotted on eBay a tin of vintage Caran d’Ache Supracolors – with attached erasers! What an anomaly! I’ve seen (and own my share of) quite a few variations of Caran d’Ache colored pencils, vintage and contemporary, but never had I seen any before with attached erasers. They seem so – American! I suppose they were intended for school kids who like an eraser on the other end of their pencil? Even so, all my research indicates that children growing up in Europe have not relied on graphite pencils with erasers attached, neither in the past nor in modern days, so why would they want their colored pencils to have them? So many questions to keep me up at night!
The other question that every colored pencil historian must ask is where these Supracolors fall in the Caran d’Ache product timeline. Based on the Swiss company’s sans serif logo on the tin lid and the appearance of the Bonne-Mine mascot, the set could have been produced any time after 1958, though the “drippy paint” logo inside the tin lid most likely places the set between the ‘70s and ‘90s. No barcode appears on the tin. 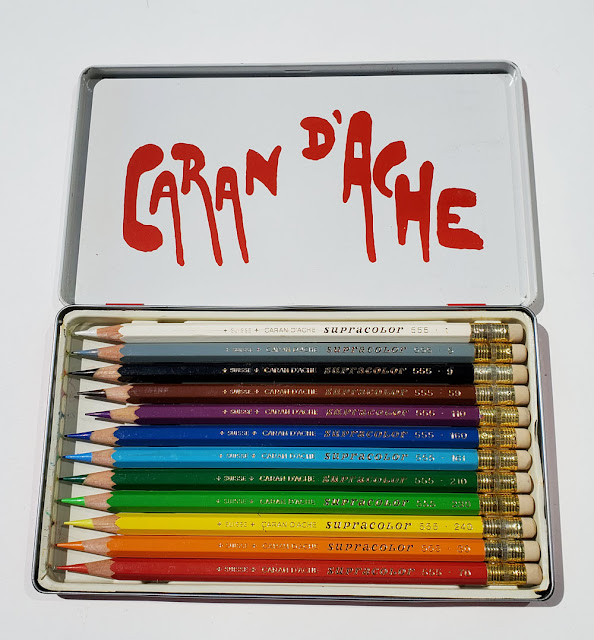 Another clue is the +Suisse+ mark on the pencils, which I’ve seen on one other vintage set I have reviewed – non-watercolor Cd’A pencils. The spelling was later changed to Swiss, as it is on contemporary sets, so my guess is that the set I’m reviewing came from the earlier end of the ‘70s-to-‘90s range.


Yet another question is the product name: Supracolor. If you’ve kept up with my sometimes-frustrating documentation of Caran d’Ache colored pencil history, you know that Cd’A’s nomenclature is confusing at best. Is this erasered set part of the Supracolor I line? Or Supracolor II? The core’s thickness and softness indicate that they are part of the softer Supracolor II line. But wait – the Supracolor I product number is 3999, and Supracolor II is 3888. The eraser-topped Supracolors have the product code 555!
Although this set of Supracolors feels close enough to modern Supracolor II’s, the different product number made me wonder if the eraser-topped ones were formulated differently to make them easier to erase. I tested a couple of vintage colors against their contemporary counterparts by erasing swatches with two of my favorite erasers – a kneadable Faber-Castell and a Tombow Mono Zero – on a smooth Stillman & Birn Epsilon page. (The attached erasers themselves long ago became petrified and useless.) I saw no difference in performance. All swatches, vintage and contemporary, were equally difficult to erase, which didn’t surprise me at all; heavily pigmented colored pencils are characteristically stubborn to remove from paper. So the 555 product code must be only to distinguish the eraser-attached set from the standard. 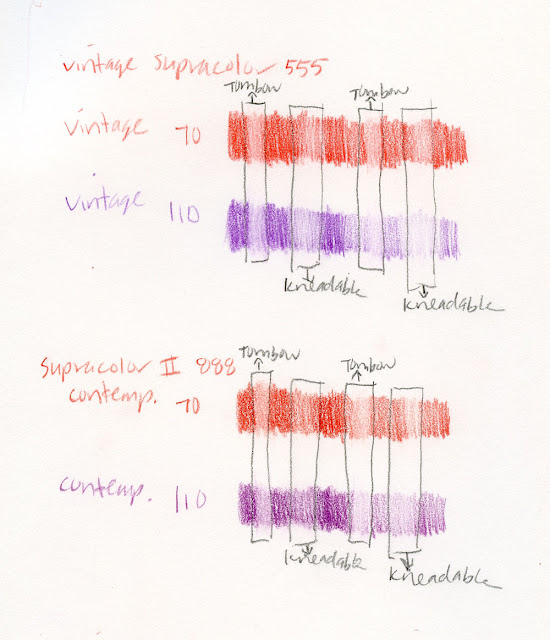 This is pure speculation, but I would venture to guess that this product was not in production long. Perhaps both the lack of need for an attached eraser and the core’s difficulty in erasing made the set obsolete quickly. However many decades later, I’m pleased as punch that I was able to grab one (for a relative song).