I’ve had a long-standing love of brush pens. A quick look through my Current Favorite Art Materials page will show that one of my very first product review posts, written within my first month of blogging back in 2012, was about Tombow and Akashiya brush pens. Those pens launched me headlong into the dazzling world of water-soluble colored brush pens. Fairly early on I had decided that brush tips made of compressed nylon or felt (such as the Tombows) were not as flexible and responsive as actual brush tips made of synthetic hair, so I focused my interest and experiments on markers such as Pentel Color Brush pens and, eventually, Kuretake Zig Clean Color Real Brush Markers, still my current favorite. (JetPens has a good blog post comparing all the colored brush pens the company carries.) 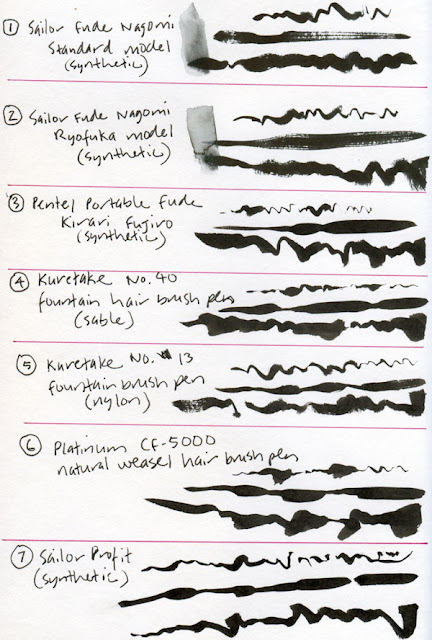 Somewhere along the way I discovered brush pens containing refillable or non-refillable black ink – pens designed to mimic Asian calligraphy brushes. Again, these are of two general types: some kind of compressed fibrous material and actual hair brush tips. As with colored brush markers, I favor the ones with hair brushes, which do a reasonably good job of producing the flexibility of traditional sumi brushes (but with a finer tip for the purpose of calligraphy rather than painting). In the same way that I’m hooked on variable-width fountain pens, I adore the loose, expressive strokes that brush pens can make.

A while back JetPens produced a comprehensive article and video comparing its vast collection of brush pens, which made me think about (with some embarrassment) how many brush pens I have. I decided that one way to rationalize my vast personal collection was to write a comparison review of my own! (Amassing art materials and tools can always be rationalized one way or another.)

Although I own a number of the compressed fiber/nylon tip brush pens that are fun to write with (I often use them to write greetings cards with), I rarely use them for sketching, so I’m going to focus here on the type I favor for sketching – the ones with hair brushes. Recent discoveries are brush pens with natural sable (or weasel) hair brushes similar to fine paint brushes. Overkill for a brush pen used for sketching? Probably. But I wouldn’t know without trying them!

I tend to use black brush pens for a few specific purposes. One is when I want to do gesture sketches of people, and I don’t want to be tempted to get into facial features and other details. Another is when I want to sketch an intricate building that I need to do quickly – again, to avoid detail (I guess these would be gesture sketches also, if a building can have a gesture). A third favorite use of brush pens is to sketch trees; the organic, free-flowing nature of brush pens seems to be made for expressing gnarly or gracefully reaching branches.

In short, a brush pen will not allow you to get too fine and fiddly, so if you have a tendency to get mired in detail while losing the overall picture, it’s a good antidote. When I was a poetry-writing student long ago, one of my favorite professors, Nelson Bentley, used to say to poets who had a tendency to get long-winded, “Try haiku: It’s a sure cure for verbosity.” I think of brush pens the same way.

Yet another way I use brush pens is a more recent discovery. Last year after seeing Ch’ng Kiah Kiean (better known as KK) give a demo in Paraty of his twig-sketching technique, I tried channeling KK for several months. I’m still fascinated by that ultimate variable-line-width sketching instrument, and I still pick it up occasionally. What frustrates me the most, though, is that a twig doesn’t hold much ink, so I am constantly dipping back into the ink bottle after each stroke. What I discovered is that a brush pen that’s running out of ink yields something like a scratchy, dry-twig effect – but without requiring continual dipping (it’s like a fountain pen, so it requires no dipping at all). Even a fully inked brush pen can make the same, slightly unpredictable, slightly uncontrollable stroke that twigs are famous for – but with slightly more control!

One note before I describe the pens: You’ll see that several have names that contain the word “fude” (which means brush in Japanese). This is not to be confused with the fude fountain pen nibs you already know I love. The fountain pen nibs have “fude” in their names because they, too, are mimicking brush strokes.

Not shown in the sketch at the top of the page and the brush stroke comparison chart is the J. Herbin CreaPen Pinceau refillable bristle brush pen, which I had misplaced for a while and then later found. I don’t mean to discriminate against this pen – made in France, it’s the only non-Japanese example – by not sketching it. But after finding the pen, I was too lazy to re-do the sketch. J It’s a perfectly adequate brush pen without much to distinguish it from the others. One thing to note is that it comes with three cartridges when purchased from JetPens, but the package product info does not say whether the cartridge ink is waterproof. I noticed, however, that the cartridges look exactly like Platinum cartridges, so I popped a Carbon Black cartridge on instead of one of the included cartridges, and indeed it fits perfectly. Since then, I’ve learned from Ana at the Well-Appointed Desk that the cartridges included with the pen are also waterproof.

As for all the Japanese brush pens I tried, I’m sorry to say that not much distinguishes any one from the rest. I really wanted the natural sable hair Kuretake or weasel hair Platinum to be hands-down better than the others, if only to justify the prices I paid for them. Unfortunately, that wasn’t the case. The synthetic brushes have just as much bounce-back and retain their tips as well as the natural-hair brushes. What’s more, the Platinum weasel seemed harder to control than any of the synthetics. They are all perfectly adequate brush pens, and none stands out in any extraordinary way.

I do have a few comments on some:

After all that, do I have a favorite? I’d say it’s No. 5 in my sketch, the Kuretake No. 13 with synthetic hair. But I admit it’s not because of any special features or characteristics. It’s just the one I’ve had the longest, so it’s familiar, and it responds well to what I do with it.

Sorry this comparison review doesn’t have any exciting discoveries. The only revelation seems to be of my bad habit of acquiring way more brush pens than I need (but you probably already knew that)! You wouldn’t go wrong with any of these brush pens, though it might be useful to keep these points in mind when making your choice: