A Crosswalk is a Symbol

When I first saw media photos of a freshly rainbow-painted crosswalk yesterday, I assumed it was a temporary decoration for Pride Week. But it turns out that the 11 rainbow crosswalks in the Capitol Hill neighborhood are permanent, according to The Seattle Times.

Fabric banners and other rainbows are commonly seen on Capitol Hill, but knowing that these crosswalks were a permanent investment by the city gives them greater meaning. Sketching near the intersection of East Pike Street and 11th Avenue, I felt proud of Seattle for displaying these bold rainbows in the street. 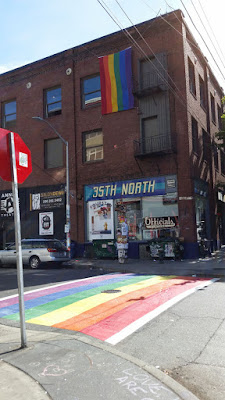 Less than a week ago nine people were murdered in Charleston for being black. I would like to believe that Seattle is a safe place for people of all colors, beliefs and sexual orientations. Given that the particular intersections were chosen for these crosswalks because they had been the sites of violence against people based on their sexual orientation, I’m not sure how much confidence I have in feeling that way. Still, the crosswalks are a symbol of where we stand as a community.

In the wake of the Charleston murders, the controversy rages on about whether the Confederate flag should be removed from the South Carolina state capitol. Many people feel strongly that the flag represents their southern heritage; others point out that that heritage includes slavery and racism.

Posted by MiataGrrl at 2:13 PM