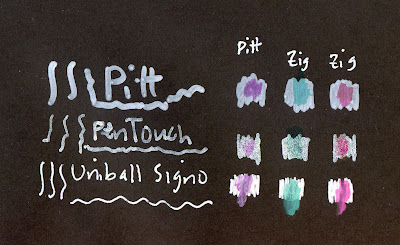 I’ve tried sketching lights at night only a couple of times – once to sketch lanterns floating on water at the From Hiroshima to Hope event last August, and once to sketch the moon reflected on water a couple months ago. Neither sketch turned out quite the way I wanted it to, and I realized the difficulty of trying to sketch a mostly-dark scene on white paper. In anticipation of sketching holiday lights, I needed a different approach: black paper.

I’ve been wanting to sketch on black ever since I tried using dark gray paper to sketch my X-ray last month (inspired by David Hingtgen’s sketches in a black Moleskine sketchbook). Sketching the X-ray taught me that I prefer using a Uniball Signo gel pen (the most opaque marker I’ve found) to white gouache, which was much harder to keep opaque. But I also want to be able to show all those colored lights I’m anticipating. . . how to put bright colors on black paper?

One way is to use colored opaque gel pens. But it occurred to me that I could put down some white opaque ink first, then apply colored markers over it. With that in mind, I tested three opaque white pens I happen to have: the Uniball Signo gel pen; a Pen-Touch paint marker (it smells solvent-based and therefore is probably nasty stuff); and a white Faber-Castell Pitt Big Artist Pen with a “bullet nib.”

As I’d found before, the Uniball Signo is the most opaque of the three, completely covering black paper. Unfortunately, it’s also the only one of the three that is water-soluble, so when I put a water-soluble Zig marker or even a permanent Pitt Artist Pen over it, the color got mixed into the white and turned somewhat pastel-tinted.

The Pen-Touch paint marker is waterproof when dry, but it left a rough surface that I don’t like (and bled through to the back of the paper and left a stain on my desktop – I knew it was nasty stuff!).

The white Pitt Big Artist Pen, with a “bullet nib” too wide to do much with while sketching, was the least opaque of the three, but it also left a nice, smooth surface – and it’s waterproof when dry. So both a permanent Pitt Artist Pen and a water-soluble Zig marker didn’t mix with the white. Unfortunately, the colors also don’t show up very brightly, since the opacity isn’t complete.

Then the question became: Which is more important for a white background behind colors – full opacity (Uniball Signo) or being waterproof (Pitt)? Oh, what the heck – I brought both! (This is the type of situation during which it really pays off to be an art supply junkie – I didn’t have to go buy a thing.)

As it turned out, I used mostly the white and colored Uniball Signo gel pens to sketch the lights on a Maple Leaf home, with just a touch of a red Zig marker (that turned pink over the white Uniball) and the white Pitt Big Artist Pen. But if the weather cooperates, I still have at least one more opportunity to sketch holiday lights, so I might give my experiments another try. (Incidentally, my Mighty Bright XxtraFlex2 book light came in handy last night!)
Posted by MiataGrrl at 7:54 AM