Unless they are being sold as sealed, new-in-box, mint-condition items, products on eBay can be tampered with in many ways. I don’t mean that sellers are being deliberately deceitful (though some certainly might be). I just mean that when an item is used, it’s always possible that the seller or a previous owner changed the product somehow. I often see used colored pencils listed on eBay in which the photos make it clear that the pencils and the packaging they come in do not match. An interesting case came up recently:

The first thing that caught my attention was a listing for a vintage tin of 12 Caran d’Ache Prismatec colored pencils. The tin design showed a red pencil being used to mark a map, not make art. The only times I had ever seen a Caran d’Ache product called Prismatec, it had been 2mm red-colored leads for clutch pencils. But then I recalled the brochure that had come with a vintage Caran d’Ache Aquarelle pencil set that included this description: “The Caran d’Ache Prismatec 101 pencil, with its thin, hard colour lead, is especially suitable for technical drawings, etc. It is an excellent substitute for Indian ink.” A-ha! So here was a rare sighting of a set of woodcased Prismatec pencils!

Alas, my excitement was short-lived. Examining all the photos in the listing, I saw that the tin came with only two lonely pencils. Still, it was better than nothing, and maybe someday I’d find more of those Prismatec pencils. I scooped it up.

My colored pencil guardian angel was apparently looking after me. Very shortly thereafter, when I wasn’t even searching for Prismatec, I came upon a listing for 18 “Caran d’Ache Swisscolor Colored Sailboat Pencils.” The tin shown was blue with an image of three colored pencils (I showed the design in my recent post about vintage Supracolors). In every case that I’ve seen this tin design on eBay, it has come with unnamed pencils with three sailboat icons. I already have a set, so I wasn’t interested in buying it, but I looked through the images in the listing – and zoomed in on one in particular. The pencils in the tin were not “sailboats” at all – they were Prismatecs! Bingo – now I had both the pencils and the tin that should have contained them!

The hexagonal Prismatec 101 pencil barrel has an unfinished end. Note that the branding information includes “Suisse,” which is the spelling I’ve seen on my oldest set of Prismalo (now believed to be from the ‘50s) and on a set of non-watercolor “333” pencils. I believe older Caran d’Ache pencils use that spelling, while later pencils use the spelling “Swisse” (and contemporary ones say “Swiss made”). 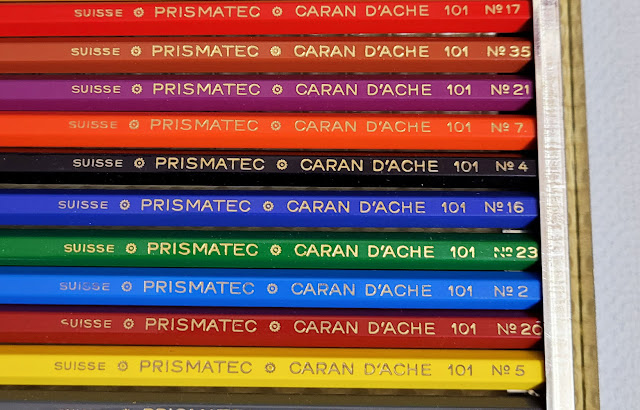 As described in the old brochure, Prismatec cores are very hard and thin – “suitable for technical drawings.” As expected, they are not water-soluble. Prismatec was likely a competitor for Staedtler Mars Lumochrom pencils back in the day when engineers, drafters and technical illustrators used colored pencils in their work (ahh, those were the days, indeed). Although I probably wouldn’t use these for traditionally layered colored pencil drawings, I’ve enjoyed using Prismalo and other hard, thin colored pencils for crosshatching, so I gave Prismatec a try. It is probably the hardest, driest Caran d’Ache colored pencil I have used, but it worked well for this crosshatched sketch (the darker pencil in the background was a Blackwing).

There was only one thing left to do. My Prismatec tin holds only 12 pencils, but I had 18 Prismatec pencils that came in the blue tin plus the two that came with the Prismatec tin. I picked out 12 Prismatec colors, sharpened them up, and arranged them in the Prismatec tin the way I think Caran d’Ache would. Now I have a proper complete set.


OK, maybe there’s still one more thing: If I ever get my hands on Prismatec leads for a reasonable price (apparently also out of production, they are usually overpriced on eBay), it would be fun to compare them with the woodcased version. 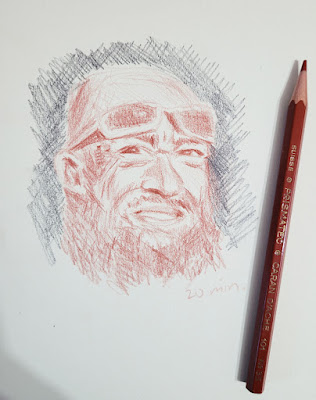