USk Seattle always orders up sunshine, and for a change, it was delivered on time for our Saturday outing on Capitol Hill! Meeting up at the light rail station, which was going to be our contingency shelter, most sketchers took advantage of the mild, dry weather to sketch outdoors.

I walked to nearby Cal Anderson Park, where I hadn’t sketched since 2016. The “fountain mountain,” as the Doug Hollis-designed water feature is called by locals, wasn’t running water the last time I sketched it, but this time it was (top of post). Apparently it was repaired last fall after some damage, so several of us who sketched it were lucky it was no longer covered in scaffolding.


After that, I walked around the neighborhood a bit to find a second sketch. A reflective, metallic sculpture in front of the Broadway Performance Hall caught my eye (left). I liked the contrast between the modern sculpture and the historic building, which was originally built as part of Broadway High School in 1911. Finding a way to put them both in the same composition, though, was tricky – the best view would have been from the middle of Broadway standing on the streetcar tracks. I had to settle for the sidewalk, barely getting the top of the tower into the sketch.

For my last sketch, I ended up back at Cal Anderson Park, where two women were probably sketching the fountain (below). After all the rain and gray we’ve been having, it was so nice to see shadows again!


My light rail rides to and from Capitol Hill are short – less than 15 minutes each way – so I barely had time to sketch, but I did my best to catch a few commuters.
We had a strong wintertime turnout by USk Seattle, including a visit from Anya from Anchorage, who tries to sketch with us whenever she’s in town. 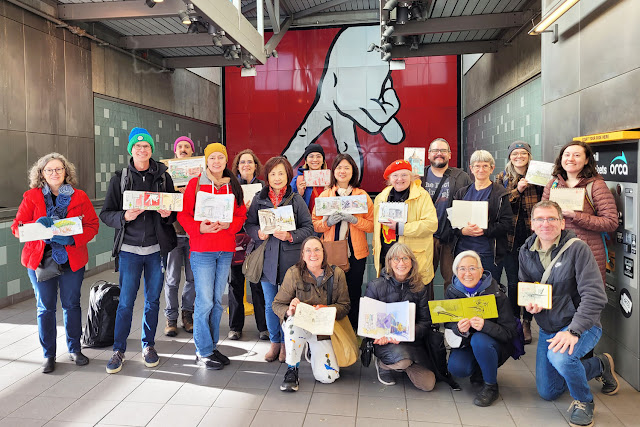