At the Wedgewood neighborhood Top Pot Doughnuts for our portrait party last month, Ching, Natalie and I were surprised to see it so empty. Back in the Before Times, I had sketched at the same Top Pot occasionally, and while it was never mobbed, I always had plenty of people to sketch. Maybe donuts have fallen out of favor: Last Thursday morning it was deserted. I had the seating area literally to myself for more than an hour. Several people came in for coffee or boxes of donuts that they were carrying out, but no one stayed.

I wouldn’t have been comfortable if the place had been full, but I was still disappointed not to have any people to sketch. On the other hand, I noticed interesting patterns of light and dark on the tables and chairs, so I decided to look for a composition to put them in. Like a good girl, I even started with a small thumbnail (bottom of post). As you can see from it, I tried out various ways to crop the composition and ultimately changed it again in my final sketch.

Around the time I was thinking about leaving, another patron finally took a seat. Strongly backlit against the window, I could barely see his face, so I decided to make him a value study, too.


Sometimes when drawing chairs, which are always challenging, I try to pay attention to perspective. This time I got so interested in values that I ignored perspective (and even proportions – the hilarious off-center table base!) because my pea brain apparently can’t process too many concepts at once. But it’s a good thing I wasn’t paying attention to perspective, because halfway through the sketch, a staff person came through the seating area and started cleaning – moving all the chairs around! 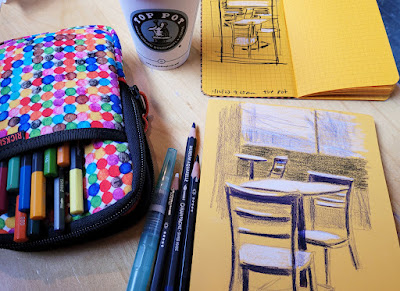