(If you missed Part 1, read it first for the context.)

With a total of 76 mostly pencil-sized elastic loops, my “downstairs studio” portfolio case seemed plenty big enough, but I knew I had to be judicious in how I filled it. Initially I thought I would simply put all my small, specialized kits into it, but a better idea was to make my selections seasonal.

Since I use it year-round, I began with my skyscapito kit made up of Caran d’Ache Bicolors, a waterbrush and a black Uni Pin brush pen (see panel 1 above). Since it’s winter, my slimmed-down nocturne kit came next: a white Sakura Gelly Roll and a couple of white/off-white Prismacolors. Christmas is over, so I left out the metallic gel pens. In the summer when I sketch on the deck, I’ll replace the nocturne kit with Steller’s jay and squirrel colors.

The first panel shown above also includes a Faber-Castell Pitt Soft Brush Pen and a kneadable eraser because it’s the only panel that includes a few larger loops to accommodate them. I was disappointed that the pencil loops are too tight for some pens, but it just means I have to be more selective. I was pleased that my Mighty Bright XtraFlex2 Book Light (shown below), which I use for sketching in the dark, clips onto the edge of the folding panel and doesn’t impede zipping the case closed. It does block several loops on the third panel, though, so I’m not sure how long it will stay there.


The center panel (below) is devoted to graphite and Bic ballpoints (in three point sizes). I may have given the Bics too much space, but since I love grabbing them for portraits, I’ll leave them in for now.
The third panel (below) includes a small selection of Caran d’Ache Neocolor I non-soluble wax pastels (a Zorn palette and a primary triad), a selection of Caran d’Ache Museum Aquarelles, and a Viarco ArtGraf water-soluble graphite pencil. The colors of Museum Aquarelles are not well-thought-out, since I use them mainly for urban sketching, but I couldn’t imagine assembling a “downstairs studio” without a few of my beloveds.
As you can see, I left some space for growth and future ideas. I expect the contents to change often as I get inspired to use different materials. I have only one firm rule: I can’t bring downstairs any materials that don’t fit in the portfolio. If I run out of loops, then I have to take other things out to make space. This is the same way I manage my clothes closet (if I fill my finite number of hangers, I can’t buy new clothes until I get rid of others) and coffee mug collection (one kitchen shelf only). Needless to say, this system doesn’t work with my upstairs studio, which simply gets more crowded. But I have hope for the “downstairs studio.” 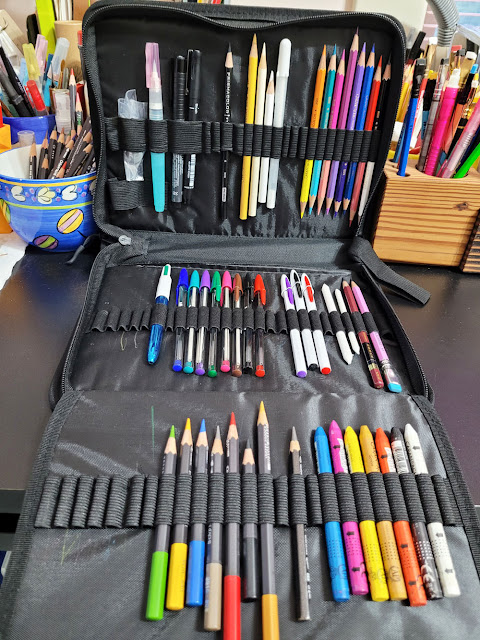 I’ve used the new “studio” several times for skyscapitos and portraits, and it’s working out well. I love its compactness – an easy carry around the house.

Just as satisfying as filling the portfolio was cleaning up my chairside table, which was long overdue for vacuuming and tidying. I put away materials I never use downstairs (how did so many rolls of washi tape walk down the stairs by themselves?), reevaluated others, and found a couple things I thought had gone missing. It feels good to start the new year this way.

Email ThisBlogThis!Share to TwitterShare to FacebookShare to Pinterest
Labels: studio