I was sketching on one end of an alley when a young man came out of his nearby house. It was the same neighbor who had come out to see what I was doing a couple of months ago because he thought I was the one who had called the police.

“Would you draw my house if I paid you, like, $20?” he asked me. “Or is that not your thing? Because I totally respect that if it’s not.” I smiled and said it wasn’t really my thing, and he happily wished me well. 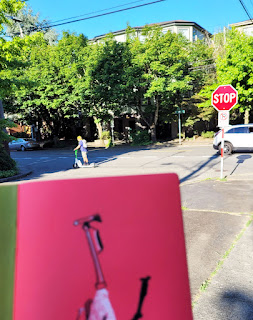 That same morning, I had a different type of interaction: I was just finishing up my sketch of the LimeBike scooter and was about to take a photo when a man arrived. Giving me a vicious stink eye, he tapped something on his smartphone and rode away.

Almost all urban sketchers have stories about ways in which they’ve engaged with passers-by. Those were two of mine. It beats sketching alone in my studio any day.