My preferred way to sketch on location is on my feet. Sitting makes me even more “vertically challenged” than I already am, and since most of my sketches take no more than 30 or 40 minutes, it’s not a hardship to stand. In outdoor workshops, however, or in rare cases when I want do want to be seated, I have been using my teeny-tiny Daiso folding stool. As lightweight and small as any stool could be, it fits easily in a tote bag or backpack. I have schlepped it easily in my carry-on bag to symposiums and on other travels.

It has its limits, however: about half an hour. Longer than that, the low-to-the-ground seat is not comfortable, even with legs as short as mine. With a plein air class coming up, which would meet in parks for three hours each week, I knew I needed a better solution. I had been looking around for a while, and at the last sketch outing, Sue had mentioned a sketch chair she liked: the Darchen portable chair.


When I first pulled the frame out of its zippered storage case, it looked like a broken umbrella – a bunch of hinged legs and supports flailing and flopping around. With no assembly instructions whatsoever, I was already skeptical, but the bungee-corded legs popped into place fairly intuitively. In fact, the design is mildly ingenious. 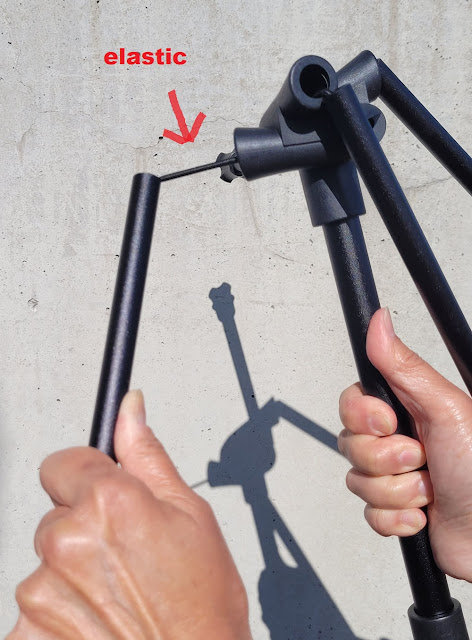 That part was easy; the seat placement was another matter. The four seat supports are inserted into small pockets in the corners of the seat/back unit. Like a fitted sheet, the fourth corner is the most difficult. In fact, it was impossible without a third or fourth hand to help. At home, I did have another pair of hands to help, but I knew I had to learn to assemble it alone. After several aggravating tries, I was ready to return it. Sue, however, came to my rescue with tips she had learned in assembling hers.

After the first three supports are (easily) placed, the last will go in, with some effort, when the seat is pulled diagonally. Once I learned this tip, it was a snap to assemble with only two hands!

Disassembly is even faster, and the whole “broken umbrella” folds back into its case for schlepping.
Way more comfortable than the Daiso stool, the seatback gives support without going into a full Barcalounger recline (like some camp chairs I’ve seen). In class last week, I sat upright to measure and block in my drawing, but then I could lean back and relax for more than two hours of graphite rendering. Getting up from this chair is like any chair – not like getting up from a squat!

(Thanks, Sue, for both the recommendation and the tips. I learned about the Daiso stool from Sue, too, which makes her my official sketch chair consultant.)