With a few exceptions, most of my vintage colored pencil collecting has been led by whim, curiosity and availability of affordable items on eBay – without specific targets. One notable exception has been Caran d’Ache’s water-soluble colored pencils. As my favorite maker of and the original creator of my favorite art material, Caran d’Ache is special to me, and therefore its history is interesting. The product history of Cd’A’s watercolor pencils is also short enough – the Swiss company developed the first one in 1931 – that I might actually have a chance of acquiring samples of all its products through various eras. Although I’m certain I don’t have samples of all variations through Caran d’Ache’s history (many questions remain unanswered), I think I now have a fairly good range.

Since I’ve already written about most of these pencils before, this post will serve as an update rather than a rehash of my previous speculations and theories. For the context, please see these posts:


My latest acquisition is a set of Supracolor I (left, top row, in the photo above), which answers the question I had been asking for a long time. When I first acquired the “Water Soluble” set (center of top row), I was told that these pencils and Supracolor I (which I didn't own yet) were the same – only the names on the boxes and the barrels were different. In addition, Supracolor I and “Water Soluble” both have the product code 3999. Now that I finally have some Supracolor I to make my own comparison, I have confirmed that the cores are, indeed, the same: The thin cores are very hard and contain little pigment. According to the Supracolor I tin (below), these pencils have “fine leads, ideal for detailed drawing,” while Supracolor II have “thick leads, ideal for shading.”
Although I could see from initial swatches that the very hard Supracolor I pencils would not be easy to use for coloring, I made a sample sketch of an apple on principle. As you can see, I had difficulty developing saturated hues, but as promised, the very hard cores remained sharp throughout the sketch and would be ideal for fine details.

According to Atelier Caran d’Ache: The Workshop Book, the Supracolor product line was introduced in 1988 (though the I and II designations are not specified). I wish I had a sample of Supracolor II from that era to see how it compares to a contemporary Supracolor II. In any case, a new question arises: When did Caran d’Ache stop producing the I line and why? Personally, when I need a colored pencil for sharp details, I reach for a hard traditional (wax- or oil-based) pencil so that all the fine marks I spend time making won’t accidentally wash away. Perhaps other artists concur, and Caran d’Ache saw no need to maintain the harder I line.

To add to the mystery of the set of Prismalo that I reviewed last year, I have acquired a few pencils that came in a random lot without a box which are labeled Prismalo I on the barrel. What?! Prismalo and Prismalo I!? (Can you be any more confusing, Caran d’Ache?) To my hand, Prismalo feels slightly softer than Prismalo I, but beyond that, there’s no difference. Both have the product number 999. Why the two names? When did Prismalo I disappear? And was there ever a Prismalo II (doubtful, but the question is cause for yet another sleepless night)?

Notice that all three tins – Supracolor I, Water Soluble and Prismalo – look identical, with an image of the Matterhorn, red flowers and the sans serif Caran d’Ache logo.

The blue box shown is another new mystery. Contained in this tin was a set of pencils with three sailboats on the barrel. Their cores are slightly softer than the others and contain a bit more pigment. What was this nameless line, and where did it fit within the Prismalo/Supracolor history?

Finally, also in a random lot, I acquired a single Swisscolor pencil, with a core similar to contemporary Swisscolors, which are dryer than Prismalo and Supracolor and lower in pigment (my guess is that they are student grade). The product history in the Atelier book is not helpful regarding the “sailboat” and Swisscolor pencils; they are not mentioned at all. Since the book seems to focus more on artist-quality products rather than student products, perhaps both belong in the latter category.

All the above-mentioned pencils are water-soluble. I also have a few unnamed pencils with two tulips on the barrel (product code 333) that are not water-soluble. A precursor to the contemporary Pablo, perhaps?

Shown below are specimens of all the vintage product lines or eras I own. The last two in the photo are contemporary Supracolor (now called Supracolor II Soft with the product code 3888) and Prismalo.
The swatch comparison indicates that all the vintage pencils (top row) have about the same pigment level except the “sailboat” set, which is slightly higher in pigment and softer. For reference, the two swatches in the bottom row are from contemporary Prismalo and Supracolor II Soft pencils. (Whenever I compare contemporary pencils with their vintage counterparts, I am always grateful for advances in technology and manufacturing that enable me to have products now that are of much higher quality than their predecessors. I like collecting old pencils, but with few exceptions, I don’t prefer them to contemporary pencils.)
The Caran d’Ache watercolor pencil history described in this post is not exhaustive by any means. If anything, it just raises more questions. If you know more about Caran d’Ache colored pencil history or can solve the mysteries described, I’m all ears!
Updated 7/12/21: A reader contacted me with photos of two tins of "Prismalo II Soft" (product code 888) pencils -- so they did exist! Moreover, the product descriptions on the tins comparing Prismalo I and Prismalo II are identical to the descriptions (above) comparing Supracolor I and Supracolor II! This leads me to surmise that Prismalo I and II were intended to transition to Supracolor I and II, and perhaps the name Prismalo was to be abandoned. Instead, Prismalo became the name of the harder, less pigmented pencil, and Supracolor the name of the softer, more pigmented pencil, and the I and II were dropped from the names. (Thank you, Marie, for shedding light on this part of the Cd'A mystery!) 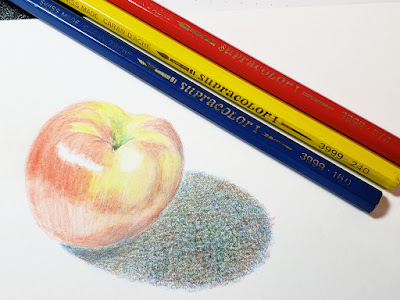 Updated 11/24/21: Since the last update, I have acquired a tin of Prismalo II Aquarelle Soft pencils. The well-used pencils that came in the tin are hardly a set; instead, they seem to be an eclectic selection of colors for a specific project. (Ratty though they are, I like knowing that they were well-used by someone; I especially like the hand-sharpened ones.) The odd assortment includes Prismalo I (product code 999) and Prismalo II Soft (888). Prismalo II Soft is softer with a slightly thicker core than Prismalo I. These pencils are further evidence that Prismalo II Soft eventually morphed into the current Surpracolor II Soft and the harder Prismalo I became the current Prismalo. The I and II were eventually dropped from Cd’A’s continually confusing nomenclature. (Perhaps I should say “partially” dropped; the contemporary Supracolor does not include the II on its tin, but the pencil barrels still include the II.)

Other than adding a new piece to my Caran d’Ache historical collection, the best part of this find is the adorable St. Bernard on the tin. Also of note is that the original owner paid £2.80 at a UK store called Jarrold. (A department store called Jarrold is still in the UK, and it carries quite a few colored pencils, including Prismalo.) 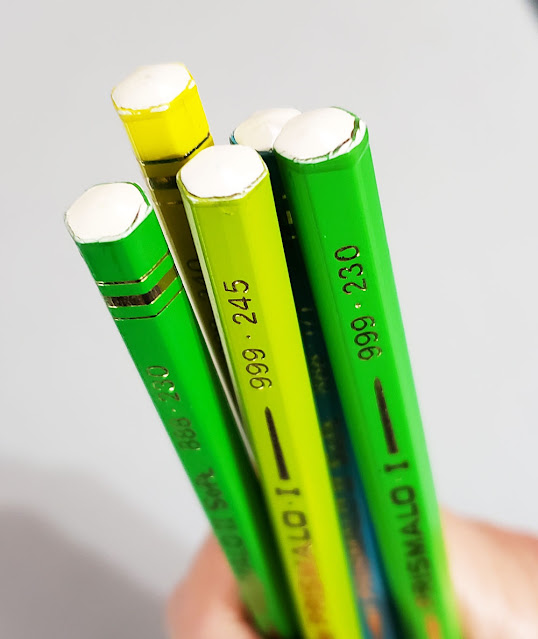